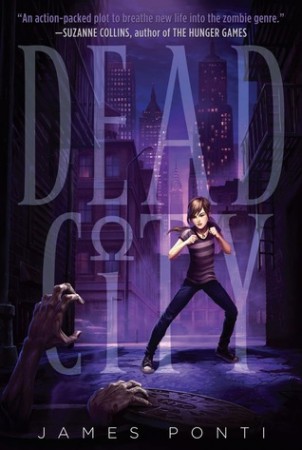 The Hunger Games author Suzanne Collins says this paranormal action-adventure “breathes new life into the zombie genre” and has “a terrific twist of an ending.”

Most kids have enough to deal with between school, homework, extracurricular activities, and friends, but Molly Bigelow has something else on her list: hunting zombies. By day, Molly attends MIST — the Metropolitan Institute of Science and Technology — but outside the classroom she’s busy dealing with the undead. Because not only do zombies exist, they’re everywhere, and it’s her job to help police them and keep the peace. Sure, she’d like to be a regular kid, but given that her mother was the most revered (or feared, depending on your perspective) zombie hunter in the history of New York City, “regular” just isn’t possible. Molly’s got some legendary footsteps to follow—and some undeadly consequences if she fails.

Stand alone or series: Book 1 in the Dead City series

Why did I read this book: Somehow, this book completely slipped under my radar last year – I mean, this is a book featuring an awesome middle grade-aged female protagonist, who fights zombies in New York City. AND it’s blurbed by Suzanne Collins (who I don’t think I’ve ever seen blurb ANYTHING). Had I known about this book, I would have been all over it like an insatiable zombie horde moving in on helpless human prey. So, when I saw this great looking book at my local bookstore last week, I scooped it up and devoured it immediately (zombies = ideal beach reading).

Seventh grader Molly Bigelow has never really fit in with the popular crowd. As a little kid, Molly’s mother insisted that she take Jeet Kune Do instead of ballet; and at the age of 7, Molly started to accompany her forensic pathologist mother to the morgue to learn about and respect death. After Molly’s mother passes away of cancer, Molly finds solace in the morgue, helping out her mother’s old coworkers and other student interns. Needless to say, Molly’s reputation as “that weird Bigelow girl from the third floor” (not to be confused with her beautiful and popular older sister, Beth) has some merit. After all, how many other seventh graders like hanging out at the morgue all summer?

Molly’s life is about to get a whole lot stranger, however, when she is befriended by three students at her highly competitive science magnet school, MIST (that is, the Metropolitan Institute of Science and Technology). Natalie, an “Upper” high schooler at MIST, has been hanging out with Molly all summer as an intern at the city morgue – but even so, Molly is surprised when Natalie (intelligent, beautiful, over-achieving high schooler Natalie) comes over to hang out with Molly at lunch on the first day of school. Molly’s even more surprised that Natalie brings popular football player Alex (also a high schooler, also super brainy), and a quiet seventh grade computer prodigy named Grayson over to hang out with them. Soon, Molly discovers that Natalie, Alex, and Grayson are no ordinary MIST students – they are actually “Omegas,” members of a secret society of MIST students recruited each incoming class. And they police and protect the undead citizens of New York City. That is, zombies.

It turns out that there is much more than just rats in the extensive network of tunnels and abandoned sewers beneath the island of Manhattan – there are three different kinds of undead human, too. Level 1s try to go about their (undead) lives much in the way that humans do; Level 2s look like humans, but are sadistic, twisted, soulless monsters that need to be policed from doing harm to the humans they loathe; Level 3s are degraded 1s and 2s that look like the zombies from a George A. Romero movie, and need to be put down with brutal efficiency.

Molly finds herself the newest, youngest recruit to MIST’s current crop of zombie-killing Omegas, with some serious expectations to live up to (oh yeah, her mother? One of the most legendary zombie-killers in Omega history). When Molly and her new friends stumble across one serious level 2 with a vendetta against the Omegas – and Molly in particular – it is up to the young team to stop the bad guys before the Omegas and all their secrets are discovered.

The first book in a planned series, Dead City is simultaneously snarky, hilarious, and possessing just the right amount of action and horror elements to make this a perfect book for middle grade and young adult audiences. In other words: I loved it.

The thing that makes Dead City really sing is the voice and characterization of its protagonist, Molly. This is a book about a lonely young girl, who misses her mother deeply, but who learns that she has both friends and family that will stand by her even in the hardest, darkest of times. Molly is genuine and honest, both vulnerable (in her loneliness and her self-conscious awkwardness), but also incredibly strong and self-assured (especially when it comes to her fighting, observational, and reasoning skills). Her voice reflects this balance of composed snark and timidity, which makes her all the more memorable and nuanced as a character. This depth extends not just to Molly, but also to the secondary characters in the book – in particular, Molly’s fellow Omegas and her sister, Beth. I love the relationship of trust and teamwork between the MIST Omegas – beyond Molly, my favorite character has to be leader Natalie, who fights for her teammates when no one else will, and whose blend of competence and stress under pressure rings as wholly true. Grayson and Alex are perhaps less detailed as characters, but equally as entertaining and wonderful as members that bring different strengths to the Omega team (Alex with his athletic prowess, Grayson with his oracle-like technological skills). AND I loved that there wasn’t a romance in this book at all – this is a book that focuses on camaraderie and friendships, and I appreciate that very much.

Also, I have to say something about the relationship between sisters Molly and Beth, even though this is a relatively minor part of the story – it’s just rare to see, especially in YA and MG fiction, and I feel like it deserves a little attention. I love the relationship between the two very different sisters. Even though there’s the usual big sister bickering (and believe me, as the eldest sister I am familiar with the bickering), I love that Beth sticks up for Molly (and vice versa) when it counts. At the beginning of the book, for example, when we are first introduced to the sisters, we get a taste of their relationship when a nosy neighbor tries to butt into Molly’s summer hanging out at the morgue:

I only made it a few steps before Mrs. Papadakis decided she just had to butt in. She put a caring hand on my shoulder, like we had some sort of close relationship…which we don’t.

“Darling, it is not appropriate for a girl your age to visit the morgue. I know your mother -”

The mention of my mother was as far as she got.

Beth literally stepped between us and said, “Mrs. Papadakis, my mother thought you were a joke. I’m sure she wouldn’t want either one of us to take advice from you. So save yourself the trouble.”

“Really?” Beth said, not backing down. “Because I thought it wasn’t nearly as rude as a woman your age trying to bully my little sister into feeling bad about herself.”

Did I forget to mention that despite our many differences, my sister totally rocks?

YES. THIS. There are other heartfelt moments, too, like when Beth helps Molly apply makeup and the two girls confess their insecurities – with a deep thread of love and understanding between them all the while. That is all kinds of awesome, and I’m so happy to see it in this book.

What about the actual, ya know, zombies, you say? Or the worldbuilding and plotting and other technical aspects of the book? On the zombie front, I appreciated the backstory of the undead and their particular relationship to Manhattan (it turns out the undead are revived and powered by Manhattan Schist – bedrock that only exists on the island of Manhattan and was exposed when the city’s first subways were created). The levels of undead are also intriguing if not completely developed – I like the idea of there being different grades of zombies, and how some of the undead are simply trying to live their lives (er… you know what I mean).

That said, there were most definitely a few things that didn’t work: namely the basis of the entire MIST/Omega setup. I’m not convinced of the reasoning behind using teenagers to fight zombies – especially as this is a storied institution that has trained and expert fighters that pass through its doors each year, who are better trained, older and better equipped (financially, independently, and almost certainly emotionally) to deal with the zombie threat. There’s also a tendency to gloss over the meaty stuff – the presentation of Grayson’s to explain the history of the Omegas, the reasoning behind WHY kids would be used to fight zombies, for example, aren’t actually shown in the book. That’s frustrating.

Still, the book is so damn enjoyable that I didn’t mind these issues – much. Plus, Dead City ends on a heckuva cliffhanger. I, for one, cannot wait to see what Blue Moon holds. (The good news about my tardiness in reading this book? I only have to wait a month!)

Definitely recommended, especially for younger readers looking for a fun, action-packed read with a strong core of friends at its heart.

You’re Probably Wondering Why There’s a Dead Body in the Bathroom . . .

I know that sounds prejudiced. I’m sure some zombies are really nice to kittens and love their parents. But it’s been my experience that most are not the kind of people you want sending you friend requests.

Consider my current situation. Instead of eating pizza with my teammates as they celebrate my surprise victory at the St. Andrew’s Prep fencing tournament, I’m trapped in a locker-room toilet stall.

With a dead body.

It’s not exactly the Saturday I had planned. I wasn’t even supposed to compete in the tournament. Since most of the girls on the team are juniors and seniors and I’m in seventh grade, I was just going to be an alternate. But Hannah Gilbert didn’t show up, and I filled in for her at the last moment. Five matches later my teammates were jumping up and down and pouring Gatorade on my head.

And that was the first problem.

Reading Next: Rose Under Fire by Elizabeth Wein