Joint Review: The Year of Shadows by Claire Legrand 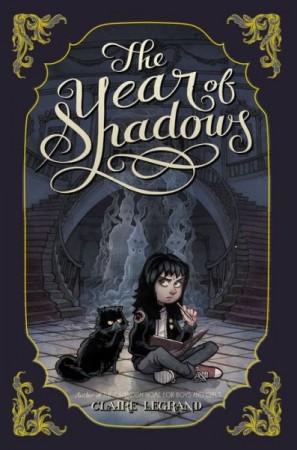 Title: The Year of Shadows

Olivia Stellatella is having a rough year.

Her mother left, her neglectful father — the maestro of a failing orchestra — has moved her and her grandmother into his dark, broken-down concert hall to save money, and her only friend is Igor, an ornery stray cat.

Just when she thinks life couldn’t get any weirder, she meets four ghosts who haunt the hall. They need Olivia’s help — if the hall is torn down, they’ll be stuck as ghosts forever, never able to move on.

Olivia has to do the impossible for her shadowy new friends: Save the concert hall. But helping the dead has powerful consequences for the living . . . and soon it’s not just the concert hall that needs saving.

How did I get this book: Review Copy from the publishers

Why did we read this book: We both LOVED the author’s debut novel, The Cavendish Home For Boys and Girls, and have been anxiously waiting for this book.

Claire Legrand’s debut The Cavendish Home For Boys and Girls was one of my favourite Middle Grade books of 2012. Its blend of (horrific) Horror and heart-warming character development was a terrific introduction to this author’s writing and had me waiting anxiously for her sophomore effort. I confess I was expecting more of the same blend from The Year of Shadows but was pleasantly surprised when this book turned out to be slightly different.

And it is interesting because in a way The Year of Shadows is also a Horror story because it features ghosts and hauntings but it’s less scary than its predecessor and it concentrates more on its main character’s story arc:

Olivia Stellatella is having a difficult year after her mother’s disappearance and her family’s economic problems. Her father is a Maestro of a failing orchestra who has invested all of his time, heart, and money into saving it. The most drastic measure has been to sell his house and to move his daughter and his elderly mother to this mouldy, dark Concert Hall.

It doesn’t help that the Hall turns out to be haunted both by friendly ghosts and by terrifying shades. The shades scare not only the living but also the dead and are a constant source of worry for everybody. It then surfaces that the friendly ghosts are lingering on this side because they have unfinished business – and as it turns out, Olivia can help them go across.

Olivia hates to be living at the Hall likes she hates the Maestro and blames him for her mother’s leaving; she hates the Orchestra for being the source of the Maestro’s focus and attention; she hates the fact that she has to live in these rundown conditions and that she has to worry so much about her grandmother’s health and well-being. That hatred seeps through the narrative in the way that she treats her father, in the way that she shuts down any offer to help and any friendship offer. At least to start with.

It would be so easy to take Olivia’s surly narrative and her deeply churlish voice at face value. But the fact is: she has very good reasons to behave like she does and to me it was easy to understand and sympathise with her. She is multifaceted too: there is the tender way she cares for her grandmother; the way she – almost unwillingly – develops a friendship with a boy named Henry (who works for the orchestra and has a secret of his own). Their developing friendship is actually most of what glues the story together in a way. Her love for art and drawing is also another side of the character.

One of the main themes of the book is shadows: not only the ones that haunt the Hall but also the people who populate the novel. The Maestro is a shadow of the man he used to be. Olivia herself is a shadow too, hiding in plain sight. But the fact is that she is only a young girl, who has to deal with a lot and who is too proud to accept help because she sees it as charity. In that sense, accepting to help the ghosts like she does might seem a bit too daring but is in fact a way for her to gain control of her own life by doing something she feels she can do well.

One of the novel’s biggest strengths is the way that most characters are well-developed. This is partly because of the way that Olivia helps the ghosts because she has to relive their memories, and this was a fun way to learn more about them (all of this reminded me of one of my favourite movies of all time Hearts and Souls with a young Robert Downey Jr and Elizabeth Shue. I feel a re-watch is needed soon).

Some of these secondary stories were downright heartbreaking. My favourite secondary character though has to be Joan, Olivia’s school mate who is a political activist who is always there for Olivia when it matters.

There is a lot more to The Year of Shadows: it’s definitely a book worth discovering.

Like Ana, I truly adored Claire Legrand’s debut novel, The Cavendish Home for Boys and Girls. Beautifully written and gleefully horrific in the best possible way, Cavendish was and is one of my favorite middle grade novels in recent memory – certainly, it’s one of the very best MG horror novels I’ve ever had the pleasure of reading. On the negative side of this praise, however, is the apprehension one has when reading the book’s follow-up act. Could The Year of Shadows live up to that powerfully creepy awesomeness of Cavendish? With the pressing weight of expectation, I was determined to give The Year of Shadows a fair shake on its own, although I couldn’t help but feel a little tingle of trepidation upon starting the novel.

Dear, fellow readers. I needn’t have worried about a sophomore slump – because The Year of Shadows? It is all kinds of awesome. It’s awesome and powerful in a very different way than Cavendish; while there are ghosts and horrific elements, The Year of Shadows isn’t really a horror novel, per se. It’s a resonant book about love, and loss, and an angry, hurt girl caught in the middle of it all. And I freaking loved every second of it.

Olivia Stellatella, our twelve-year-old heroine, is a prickly, curmudgeonly young woman who is in great pain (though she’d never admit it to anyone). After her mother ran off just over a year ago without a word to her young daughter, Olivia has been cold and withdrawn from everyone. This includes her father, whom Olivia refuses to call dad (instead always referring to him simply as “The Maestro”) and blames for her mother’s departure. If the Maestro weren’t so obsessed with the failed Orchestra, if he wouldn’t spend all his time buried in his cold metal-tubed music, things would be different, Olivia seethes. To make matters worse, with ticket sales dwindling (because of The Economy) and donations near non-existent, the Maestro has sold their family house in a desperate effort to keep the philharmonic afloat. Together, the Maestro, Olivia and Olivia’s Nonnie move into a pair of backstage rooms at the run-down Emerson Hall, where they live basically in poverty.

To say it simply: Olivia has great reason to be angry, to not want to cut her father a break, to push everyone away at school because she doesn’t want their sympathy or ridicule. She throws out all of her colorful clothes, she stops talking to other people, and she throws herself into her drawings. And, while it would be easy to write a churlish, angry character and keep her a one-note creature (certainly I’ve read enough of this type of heroine to last me a lifetime), Claire Legrand makes Olivia a layered, vulnerable, amazing young woman. Olivia’s anger is all founded in the pain of the loss of her mother – a loss Olivia can’t understand, but one she does the best to rationalize and cover up with rage. But at her core, Olivia is… lonely. And she’s not a mean-hearted person or a spiteful character, she’s simply hurt and alone. Like Ana says, I love the care Olivia takes in helping and providing for her grandmother. I also love Olivia’s growth from a girl who absolutely does not want a single friend her own age, to the cautious, beautiful friendship that blossoms between her and Henry. On that note, I love Henry’s character, too and that his own backstory is heartbreaking but believable. There’s something a bit Harry Potter-esque with these two characters, both who have lost so much at a young age – but both who learn and discover trust and happiness through their friendship. (And yes, I love the passionate character of Joan as well!)

While the characters are the true heart and soul of this book, it is also a ghost story – and a darn good one, too. Legrand creates a new vision of ghosts in this book, one in which lonely spirits are tethered to their “anchors” – items of great significance that the ghosts need to remember and discover in order to move on in peace to the Land of the Dead. Ghosts are not the only creatures in the afterlife, however, as Olivia and her friends soon discover – there are horrible things called shades, or ghosts that have chosen to stay in limbo for all eternity rather than search for their forgotten anchors. As Olivia and Henry befriend four ghosts that haunt Emerson Hall, they learn firsthand just how terrifying and dangerous shades can be – although that perception is challenged and changed over time, too. While the premise behind what makes a ghost is a little shaky (certain ghostly characters, like Tillie and Jax, make sense but others, like Mr. Worthington and his anchor, don’t quite add up), I appreciated the rules of Legrand’s ghost-laden universe.

All these praises said, The Year of Shadows is not a perfect book. It’s a tad too long, and there are a couple of sections where the story feels like it gets away from Legrand – for example, the backstory for ghosts Tillie and Jax, which is hard to swallow. While the book’s focus also gets a little lost at times, the writing and characters are so damn good it’s hard to find fault. Even at its few stumbling points, The Year of Shadows makes it abundantly clear in my mind that author Claire Legrand just has it – even when the story would detours, I had no doubt that the book will get back on the main path.

Ultimately, what I have to say is this: While The Cavendish Home for Boys and Girls might have been a tighter, more polished novel, there’s something about The Year of Shadows that resonated very powerfully with me. This is a strange, painful, yet cathartic book – and I loved every second of it. One of my notable reads of 2013 and absolutely recommended to readers of all ages. I cannot wait to read Claire Legrand’s next book!

Additional Thoughts: We are the first stop on Claire Legrand’s The Year of Shadows blog tour!

Make sure to check out her guest post HERE for a chance to win a copy of The Year of Shadows.