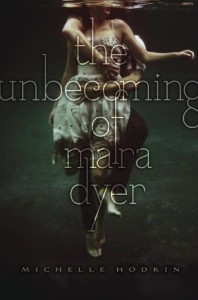 Title: The Unbecoming of Mara Dyer

Mara Dyer doesn’t think life can get any stranger than waking up in a hospital with no memory of how she got there.

She believes there must be more to the accident she can’t remember that killed her friends and left her mysteriously unharmed.

She doesn’t believe that after everything she’s been through, she can fall in love.

Stand alone or series: Book one of the Mara Dyer series

How did I get this book: I got a copy at BEA.

Why did I read this book: Because the blurb is awesome and the cover intriguing, and the hype! And the reviews!

I didn’t believe that hype could still fool me.

I didn’t think there was any way that Paranormal YA could get any more irritating.

I hoped that The Unbecoming of Mara Dyer would be different.

I had problems with basically everything about the book. And what frustrates me the most is how well it started and how much potential the story had. Mara Dyer wakes up one day in hospital with no memory about this freaky accident that killed her best friend and her boyfriend and left her physically unharmed. Psychologically speaking though, Mara is a mess, suffering of severe Post Traumatic Stress Disorder and hallucinating. It’s been a few months since the accident so her parents decide to start over, move away and Mara starts at a new high school. And then weird things happen to her – and people begin to die around her and she starts to remember…

The opening pages were quite gripping and I love the premise of the story: how this girl can’t remember the most traumatic experience of her life, and how her memories are slowly resurfacing. Not to mention all the hallucinations she kept having: the author definitely has a knack for writing disturbing, creepy scenes – there is this one scene when Mara is alone in the house that was genuinely scary. The is-she-crazy/is-she-not-crazy added quite a lot of suspense to the story and as the story progresses one starts to suspect that supernatural elements might be a part of the equation as well…which is great but unfortunately for a book that is 450 pages long, very little happens in the way of developing the supernatural elements of the story. When finally there is some development they happen via awkward conversations between the two main characters, Mara and Noah, who just happen to have…what? Abilities? Powers? The paranormal aspect of the novel is so random and underdeveloped that it makes sparkly vampires pale in comparison. To be fair, given how things don’t really happen till the very end of these (450) pages and then BOOM cliff-hanger, it is very likely that everything will be further developed in the sequel. Not that I will ever know.

I found extremely frustrating that instead of a fully realised paranormal story, what we do get are pages and pages of romance. Of course, it goes without saying that I have nothing against romance but it needs to be done well. But honestly, most of the story is taken over by a ridiculous romantic storyline that was partly infuriating and partly hilarious. Let me count the ways the romance was frustrating and troubling:

First of all, Mara starts at the new school and she is immediately singled out by Noah, the hottest guy in school (of course). She has a hard time making new (girl)friends because every.Single.Girl loves Noah and so they hate Mara immediately and on principle (of course).

An aside: she does make one friend, Jamie. Who is so underdeveloped as to only exist to perform two functions: one to be the one to relay to Mara everything he knows about Noah, which includes accusations of wrongdoings, thereby sort of functioning as a wrench between Noah and Mara. His second function is to be the poster character for diversity: he is Black, Jewish and Bisexual (three for the price of one!). Once he fulfills his roles, he disappears from the story completely. Like, literally, as he is expelled from school. The reason behind his expulsion and the way it happens is so contrived to make the story move in a certain way that I found incredibly insulting to my intelligence (and the fact that everybody behaves so illogically only made it worse).

But back to the romance:

Noah has a reputation for sleeping around and never going on proper dates until he meets Mara (of course), because she is different (of course) and not boring like all the girls at school (of course). And also of course, the girls that supposedly slept with him are the ones to get the bad reputation as sluts – not Noah. We never really know if this reputation is really warranted and if he really has slept with everybody because Mara and Noah don’t really have direct conversations – their language is the language of innuendos. I don’t really know WHY he has this reputation; I just know he is hawt and British. Because THAT explains it. Of course.

Noah is the quintessential douchebag: he is suave, a major flirt, pushy and annoying. This type of relationship dynamics can only work if the girl calls on this douchebaggery. And you know what, Mara had the potential to do so as she could see right through him. However, and this is the part that I found troubling, even though Mara calls on his bullshit and is capable of holding her on during their charged conversations, she never really acts the way she supposedly thinks, it is all just for show. The essential elements of their dynamics come across in the very language used in the book. Everything she does, or every time she argues with Noah, is “without conviction” and “despite herself”. She is always eventually caving to him. Whereas he is always pushing, always “ordering gently” or ”grinning wickedly”.

This is the sort of dynamics between the two. He calls her at home:

“How did you get my phone number?” I blurted, before I could stop myself.
“It’s called research.” I could hear him smirking over the phone.
“Or stalking.”
Noah chuckled. “You’re adorable when you’re bitchy.”
“You’re not,” I said, but smiled despite myself.

“My family is going to screw with my life if you come over.” I knew them far too well.
“Congratulations – you just made the prospect all the more enticing. What’s your address?”
“I hate you more than you can know.”
“Give it up, Mara. You know I’ll find it anyway.”
I sighed, defeated, and gave it to him.

At another time he says he will pick her up before school. She goes:

I blinked hard, and shook my head to clear it. “But it’s out of your way.”

“And Daniel has to drive to school anyway.”

Does anyone else find all this really frustrating? It just makes me INSANE that he clearly does not care when she says no, and that it is implied that this is ok by how she reacts, because really, her no actually means yes. And I am pretty sure that this is supposed to be hot and their innuendo-heavy conversations are supposed to be funny and sexy but they really aren’t. I found all of it troubling.

Not to mention that he has special supernatural powers that allows him the following:

Creepy, right? This is Edward Cullen 2.0:

“ ‘And ALL I want is you.(…) Today. Tonight. Tomorrow. Forever.’
Noah’s eyes held mine. His stare was infinite”

On that note: inquiring minds would like to know what does constitute an infinite stare?

So all the aforementioned were the troubling parts. This is what made it hilarious: for all of this intensity, all of this talk of LOVE!Forever!Mine!, the book is weirdly PG. They are boyfriend and girlfriend officially for a while before the ending of the book, they hold hands, sleep together (chastely) and there are a number of near kisses and loads of breath catching, arms brushing, galloping chests and whatnots and yet, they never get around to actually… kissing – despite all the time they spend together, all this supposed sexual attraction, and Noah’s promise that his kiss will change the world or something (seriously), they manage to not kiss for the entire book because apparently kissing is something that is really hard to accomplish. And THEN when they FINALLY find the time to kiss, there is this ridiculously convoluted paranormal explanation as to why THEY CAN’T.

I am so unimpressed.

Notable quotes/Parts: From the opening chapter:

My name is not Mara Dyer, but my lawyer told me I had to choose something. A pseudonym. A nom de plume, for all of us studying for the SATs. I know that having a fake name is strange, but trust me —it’s the most normal thing about my life right now. Even telling you this much probably isn’t smart. But without my big mouth, no one would know that a seventeen-year-old who likes Death Cab for Cutie was responsible for the murders. No one would know that somewhere out there is a B student with a body count. And it’s important that you know, so you’re not next.Rachel’s birthday was the beginning. This is what I remember.

Rating: 4 – Bad, but not without some merit. Because I am feeling charitable today.