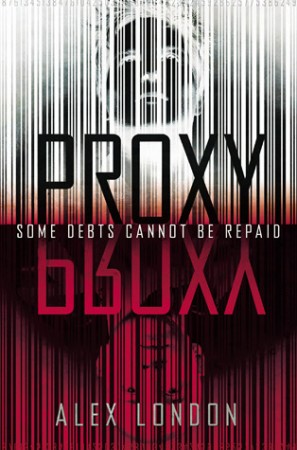 Knox was born into one of the City’s wealthiest families. A Patron, he has everything a boy could possibly want—the latest tech, the coolest clothes, and a Proxy to take all his punishments. When Knox breaks a vase, Syd is beaten. When Knox plays a practical joke, Syd is forced to haul rocks. And when Knox crashes a car, killing one of his friends, Syd is branded and sentenced to death.

Syd is a Proxy. His life is not his own.

Then again, neither is Knox’s. Knox and Syd have more in common than either would guess. So when Knox and Syd realize that the only way to beat the system is to save each other, they flee. Yet Knox’s father is no ordinary Patron, and Syd is no ordinary Proxy. The ensuing cross-country chase will uncover a secret society of rebels, test both boys’ resolve, and shine a blinding light onto a world of those who owe and those who pay. Some debts, it turns out, cannot be repaid.

Stand alone or series: Book 1 in the Proxy Series (or… could be a standalone?)

Why did I read this book: I was intrigued by the premise of this book – namely, the idea of an SFF take on the practice of a whipping boy.

In the future, the world is a hardened, unforgiving place. Following wars and violent environmental change, cities have fallen and new power hubs are established – North American cities of old like New York have tumbled into so much ruin, while untouched countries with sustainable natural resources like Nigeria have ascended to power. In this world, you live in a City, or you die in the swamps, deserts, and desolation beyond the reach of civilization.

Sixteen-year-old Sydney is a “swampcat” – a poor slum kid confined to the Valve (the cutthroat ghetto of the City). He is also a Proxy.

You see, in Syd’s world, there are Proxies and there are Patrons. The young rich who dwell in the luxurious City beyond the Valve pay (as “Patrons”) for the contractual services of the less fortunate (who become their “Proxies”). There is never any shortage of Proxies, as practically at birth the poor who are taken in by the state orphanages incur years of debt – in order to pay for that debt, they are automatically and irrevocably assigned to a Patron. Anytime a Patron breaks a law, pulls a harmful prank, or bends any rule, their Proxy incurs that “debt” and pays the price – in physical torture, and days, weeks or even years of hard labor (depending on the nature and grade of the Patron’s crime). Some Proxies in the Valve have it easy, like Syd’s best friend Egan. Egan’s Patron never gets into trouble and follows every rule; therefore Egan never has to worry about getting zapped with an EMP baton or working hard detail for weeks.

Syd, however, is not so lucky.

Sixteen-year-old Knox is Sydney’s Patron. Rich, handsome, and unrepentant, Knox pulls pranks, breaks the rules, and has learned to to care when he has to watch – via holo, because while Patrons must watch their Proxies bear punishment, Patrons’ identities are never revealed to their Proxies – his defiant Proxy get beaten for Knox’s actions. All Knox cares about is the next hot piece of ass, the next party, the next way to passive-aggressively stick it to his father.

All that changes, however, when Knox steals his father’s car and kills someone. Syd, was just two years away from paying back his debt in full and freeing himself from Proxy-hood, is told he now owes sixteen years in prison plus an unspeakable amount of physical torture. With frightful genetically enhanced Guardians on his tail, Syd makes a run for it, desperate to find his Patron and make him stand punishment for his own crime.

When Syd finds Knox, however, there is far more at stake than just the lives of the two boys. Syd and Knox are the key to changing everything – to breaking the system of Proxies and Patrons, to absolving the power imbalance, to changing their world.

Well…wow. When you lay all of that out, it sounds pretty impressive, right? On a conceptual level, Alex London’s Proxy is freaking fantastic. I was immediately taken in by the concept of Patrons and Proxies, which is essentially a science fictional take on the precedent of the whipping boy – that is, where a prince (who cannot be punished because of his divine appointment) is assigned another young boy who is punished in the prince’s stead while the prince must watch. The difference between the historical practice and the Proxy/Patron relationship in the future dystopian world, however, is the fact that there is no relationship between the Proxy and Patron. Without that intimacy between the two (not to mention the problem of having a self-centered bastard like Knox as a Patron), the appeal to a Patron’s morals and sense of right and wrong fails. Utterly. Instead, you have a huge imbalance of power, in which the rich can get away with anything, while another suffers.

Beyond this wonderful premise, the actual characters aren’t too shabby, either. Proxy starts out with Knox’s storyline and perspective which is an interesting choice, because he’s not exactly a likable character. Reckless, selfish, and cocky, Knox begins the book with an accidental murder. As the story progresses, we see Knox willing to let his Proxy take the punishment for Knox’s ultimate act of carelessness. That’s the role he’s been given in life and too bad for Syd, right? Needless to say, starting this book you aren’t exactly endeared to spoiled, rich little jerk Knox. But gradually – oh so gradually! – Knox becomes an understandable if not entirely likable character. By the end of the book, he certainly has redeemed himself in an unimaginable way.

Proxy is really Syd’s book, though, and it is Syd’s character that is the standout here. I love that Syd is angry and determined, that he takes drastic measures to win back his life. I also love that – for once – this dystopian setup is NOT completely heteronormative or exclusively caucasian; Syd, our protagonist, is dark-skinned, gay and unapologetic. I love that for all of Knox’s douchiness and his obsession with hitting and quitting that next hot babe whose name he won’t even bother to remember, there’s the counterpoint of Syd, who is thoughtful, careful and respectful with his emotions and potential romantic relationships. Interestingly, while Syd’s world is truly dystopian and homophobic (Syd is outed at one point in the text and called a Chapter11, “a bankrupt 1 and 1, a binary insult. Two of the same thing pressed together. The old way of saying it was homo.”), it seems to be one that is more accepting of different races and skin colors.

These praises said, there are also some things that didn’t quite work for the book. While the plotting is tight and fast, the actual writing errs towards the choppy and simple. All the right verbs are in all the right places, but there’s little to be said for style or nuance. More significantly, I am not quite sold on the underlying explanation behind the book, Syd’s “key” to changing the world, and the scientific explanation given. I love that it is a Jewish concept (Yovel in Hebrew, or Jubilee) that is at the core of this story, however the science used to explain the concept is spotty at best. The integration of biological viruses and technology don’t quite add up – there’s also an explanation involving a birthmark that is utterly ridiculous. I like the idea, but London doesn’t quite pull it off.

And perhaps that’s the best way to describe Proxy: it’s an ambitious book, and an intriguing one. Even though it doesn’t quite it off, it’s a good effort, and I’d recommend it.

Additional Thoughts: Make sure to swing by the guest post from Alex London, which includes his thoughts on both Syd and Knox, an excerpt of the book, and a giveaway.

Reading Next: NOS4A2 by Joe Hill