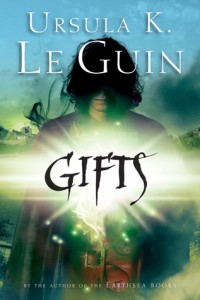 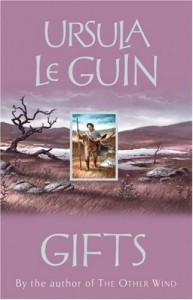 Scattered among poor, desolate farms, the clans of the Uplands possess gifts. Wondrous gifts: the ability–with a glance, a gesture, a word–to summon animals, bring forth fire, move the land. Fearsome gifts: They can twist a limb, chain a mind, inflict a wasting illness. The Uplanders live in constant fear that one family might unleash its gift against another. Two young people, friends since childhood, decide not to use their gifts. One, a girl, refuses to bring animals to their death in the hunt. The other, a boy, wears a blindfold lest his eyes and his anger kill.

In this beautifully crafted story, Ursula K. Le Guin writes of the proud cruelty of power, of how hard it is to grow up, and of how much harder still it is to find, in the world’s darkness, gifts of light.

Standalone or series: First in the Annals of the Western Shore series but can be read as a standalone novel

Why did I read this book: Because The Other Ana told me to. And I had to start somewhere with Le Guin’s books!

“To see that your life is a story while you’re in the middle of living it may be a help to living it well.”

Kicking myself up for not reading this – or any other Ursula Le Guin – sooner, I come to writing this review with a newly found appreciation for reading in general (because OMG, a lot of my recent reads have been such huge disappointments) and a keen desire, nay, a need so powerful to read ALL THE BOOKS as long as ALL THE BOOKS are as good as this one (which they will not be, but this optimistic need is there, and the need was simply not there for a while). In a way this is less of a review and more of a regurgitation of my feels about Gifts and about what most of you probably already know, if not about this book, at the very least about the author. If not, if you are like me and have not read a Le Guin before, this is definitely a good place to start because this is not only a great book but one that also made me want to read her entire backlist.

And it’s funny because what I have said so far is a statement to the power of stories and of stories well told like this one and since one of the main themes of Gifts is the power of stories and storytelling, this is all incredibly meta. The entire narrative here is kind of auto-biography of a budding storyteller at a moment when he is still falling in love with books, with reading and with stories. He – Orrec – is telling us his story, and the history of his clan and it is kind of really amazing how good writing can be such a decisive factor when analysing a book because generally speaking under other circumstances (i.e. in the hands of a not so good writer) I’d be right now voicing my protestations about info-dumps and exposition. But the prose in Gifts is so graceful to the point of being almost melodious in a way that really spoke deeply to me. The prose won me over from its opening lines: