Today is National Coming Out Day (NCOD) in the UK (celebrated yesterday in the US). NCOD was established in 1988 as a day to celebrate coming out, to further discussion and increase awareness about GLBT issues. This is just as important today as it was back in 1988 and will continue be important until there is equality in all areas; until kids don’t kill themselves because of anti-gay bullying; until people can just be.

As an individual, you can be a part of NCOD by accepting and supporting the LGBT people in your life, by supporting LGBT rights, and by simply being aware. As a blogger, you can buy LGBT books, talk about them, review them; you can visit several other blogs which are talking about LGBT issues today, this week (like Dear Author, which is giving away 125 LGBT books this week as well as reviewing several LGBT romance novels) or which are devoted to talk about LGBT every day like I am Here, I am Queer, What The Hell Do I Read?. You can go to Youtube and watch as many videos as you can from the It Gets Better Project which was initiated by Dan Savage – in response to the recent wave of teen suicides- in which people post their own videos sharing their experience in support of teens who are going through a rough time. You can read about Ally Week, a week for students to organize events that serve to identify, support and celebrate Allies against anti-LGBT language, bullying and harassment in America’s schools taking place from October 18-22 and you can get people to sign its pledge here: Take the Ally Pledge!

Thea and I are LGBT allies in our private lives but also publicly, here at The Book Smugglers, by doing what we can with the tools that we have i.e. reading and reviewing LGBT literature. Today, to celebrate NCOD, I would like to talk about a book I recently read and loved: 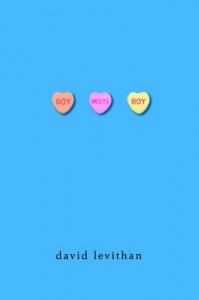 When Paul first meets Noah, the new kid at school, he knows he’s met someone special. A strong, loving relationship blossoms between them, but Noah has been hurt before, and badly. Meanwhile, Paul’s ex-boyfriend, Kyle, is going through some rough times and comes to Paul for comfort — and maybe a little bit more.

Caught in the emotions of the moment, Paul does something that hurts Noah and breaks his trust. Now the whole school is betting on Paul’s love life, with most people believing that he’ll end up with neither Kyle nor Noah, but alone.

Paul doesn’t want to lose Noah. But is it possible to win him back?

Boy Meets Boy is an utterly wonderful book about love, friendship and possibilities. It is short and sweet, a romance at its core, in which boy meets boy, boy loses boy, boy gets boy but with several different threads interwoven around its central storyline.

To everybody who knows him, our protagonist Paul may well be the luckiest guy alive. He has known since he was little that he was gay and has encountered no hurdles along his way. He is surrounded by loving family and friends, in a small town that completely embraces and supports its LGBT community.

This unnamed town is perhaps utopian and that may well be the point of the novel: to raise the possibility of such a place existing in the real world. At Paul’s school, everybody hangs out together and the boundaries are fluid. The quarterback is a transvestite called Infinite Darlene who is also the Homecoming Queen and the cheerleaders ride Harleys. In Boy Meets Boy, for its protagonist, there are no conflicts from the queer front: Paul is already out, he never has to deal with parental rejection or bullies at school, he doesn’t even want to leave his small town because why would he.

So where does that leave us?

With a really cool story about a teenage guy and his myriad of friends, who is now falling in love with Noah, the new guy at school. With a story where the protagonist is complexly earnest but not infallible, who makes mistakes and has to deal with them; where his best friend all of a sudden starts dating a jerk and becomes almost a doormat and Paul has to decide whether to confront her or accept this; where his ex who dumped him decides he wants him back after going through a rough patch accepting that he is bisexual (he would rather either like one gender or the other); this happens right when Paul is nicely settling down with Noah and much angst ensues until the nice-yet-slightly-corny ending.

A book where the main plot may well be the romance between Paul and Noah but which is as much about friendship as it is about falling in love. Perhaps, I should say that it is about love in all its forms as cheesy as it sounds. And as much as I LOVED the romance between Paul and Noah, my favourite parts of the book were those between Paul and his best friend Tony. Tony who is also gay but is not as lucky as Paul, for he lives in the next town over, with religious fundamentalist parents who will not accept him. It is from Tony’s side of the equation that a smidge of the real world spreads its tentacles throughout Boy Meets Boy which effectively counterpoints Paul’s positive experience and makes the book less of a utopia.

It is via their relationship that the writing shines and I found some of my favourite passages: in Paul’s loyalty to Tony, how he will make time for his friend like when they are spending time together and he says he misses Noah but he didn’t want him there, right then, because that was Tony-time. Or when Paul thinks:

“More than anything in this strange life, I want Tony to be happy. We found out a long time ago that we weren’t meant to fall in love with each other. But a part of me still fell in hope with him. I want a fair world. And in a fair world, Tony would shine.”

Friendly readers, I do NOT like that I have to live in a world where teens are killing themselves because they feel they have no choice because anti-gay bullies tell them that they don’t belong. I do not like to live in a world where my best friend cannot tell any member of his family or some of his other friends that he has fallen in love with another guy and that he is SO happy, because they will shun him. I would love to live in the world that Boy Meets Boy presents me: a world that is not perfect (which world is?) but which is way more open and inviting than the one I live in now.

When asked (thanks Jodie!) if the book is a work of fantasy or a work of reality, David Levithan simply answered:

‘right down the middle – it’s about where we’re going, and where we should be.’

So, I would like to say to you, today of all days: go forth and get this book. Read it, enjoy it, praise it, let your heart be filled with joy. I loved this book with all my heart, I hugged it when I finished it because it is a book about hope, about where we are going, where we should already be.

Boy Meets Boy is a TAB – a Totally Awesome Book.