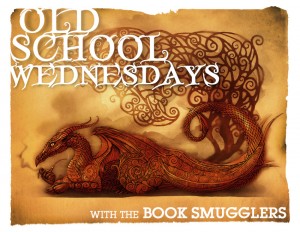 Today, it’s Ana’s turn to take over with a review of Charlotte Sometimes! 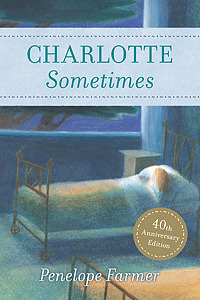 It’s natural to feel a little out of place when you’re the new girl, but when Charlotte Makepeace wakes up after her first night at boarding school, she’s baffled: everyone thinks she’s a girl called Clare Mobley, and even more shockingly, it seems she has traveled forty years back in time to 1918. In the months to follow, Charlotte wakes alternately in her own time and in Clare’s. And instead of having only one new set of rules to learn, she also has to contend with the unprecedented strangeness of being an entirely new person in an era she knows nothing about. Her teachers think she’s slow, the other girls find her odd, and, as she spends more and more time in 1918, Charlotte starts to wonder if she remembers how to be Charlotte at all. If she doesn’t figure out some way to get back to the world she knows before the end of the term, she might never have another chance.

Stand alone or series: Stand alone (but part of a larger series of books set in Aviary Hall)

Charlotte Makepeace is a young teen who has just arrived at her new boarding school and must adapt to her new surroundings and classmates. But then she wakes up after her first night to find herself in a similar yet completely altered life and surrounded by different classmates (and a sister!). She soon finds out that she has travelled 40 years back in time to 1918 and that she is inhabiting the body of a girl called Clare. For the next few months, Charlotte and Clare swap places every other day and Charlotte, now spending more and more time in 1918 must learn how to juggle two realities, and a different sets of friends and teachers.

Charlotte Sometimes is very short, with just under 200 pages but it packs a lot into it: an adventurous plot with a very tense storyline, against a historical background and featuring time travel. At its core though, Charlotte Sometimes is a story about identity and it is very interesting to see Charlotte struggle to maintain a sense of her own self with all the backs and forth. More than the fear of being stuck at a different time, what Charlotte fears and struggles with the most is that people doesn’t seem to be able to tell that Charlotte and Clare are only Charlotte and Clare sometimes. What does that mean? How do you know who you are? Things like:

And, she thought uncomfortably, what would happen if people did not recognize you? Would you know who you were yourself? If tomorrow they started to call her Vanessa or Janet or Elizabeth, would she know how to be, how to feel like, Charlotte? Were you some particular person only because people recognized you as that?

Her sense of identity is also developed in the ways that are concerned with the concept of kindness and how to treat people. In addition, there is an interesting underlining discussion about courage and cowardice. When Charlotte is stuck in 1918 for a longer period of time than expected she fights to address that in herself. It is very telling that she does that as a girl too, and that she feels that as a girl she can never be courageous enough (how sad):

Charlotte was stirred by them, made to feel brave herself or else sometimes very small and cowardly. Arthur, who had become a soldier, must have been very brave, she thought. Most people must be much braver than she, especially boys and men.

It is important to note the historical context: it’s 1918, WWI is in full swing, men are off fighting and I love that the story acknowledges those concepts of cowardice and courage as not clear-cut, black and white or gendered as this young girl might think.

In addition I think it is useful to bring up the reason why I read the book in the first place. I recently read The Shining Girls by Lauren Beukes and I mentioned in my review the weird reaction to the book’s usage of Time Travel. I was fully expecting it to be Science Fiction because I tend to associate Time Travel with SciFi but in that book, Time Travel happened because of “Magic House” therefore falling firmly into Fantasy. This was when I was recommended Charlotte Sometimes , a book that is also Fantasy rather than SciFi – the Time Travel here happens because of “Magic Bed”.

I have been trying to understand why exactly I was not bothered by the Time Travel in Charlotte Sometimes like I was in The Shining Girls and came to realise that my problem with the latter is that unlike the former, it had no rules, no explanation whatsoever and felt like a gimmicky element rather than essential plot point. In Charlotte Sometimes, as fantastical as it is, the Time Travel element follows certain rules and has a reasoning behind it and this seems to be really important to me. So there you have it: I read a good book and it also helped me understand another.

Charlotte Sometimes is a lovely book, especially recommended to those who love thoughtful Middle Grade fiction.

Notable Quotes/Parts: I wanted to include the quote below as well which is said one of Charlotte’s teachers in the book and maybe discuss it a bit especially the part that is in bold:

“You girls,” she said, “will grow up in a different world. , but as doctors, soldiers, sailors, as administrators and civil servants, as drivers, postmen, shopkeepers and policewomen. The vote is no longer to be denied you now, nor your value as English citizens. So let all of you,” Miss Bite declaimed, “let all of you grow up to be worthy of this trust, to take your place and play your part as your fellows have done in the course of a just and noble war.”

It is interesting to see how a feminist piece of writing can also be anti-feminist isn’t it? Those “misguided” women after all, paved the way for us all.