Bone Gap is a book about perspective. About the difference between looking and seeing. About fairytales, self-image, the heavy burden that beauty can be and the pernicious ways we look at and treat women. It’s awfully tense and there is this feeling of anxious momentum that runs through this novel. It’s also very romantic where it matters, empowering where it counts and beautiful in its telling. 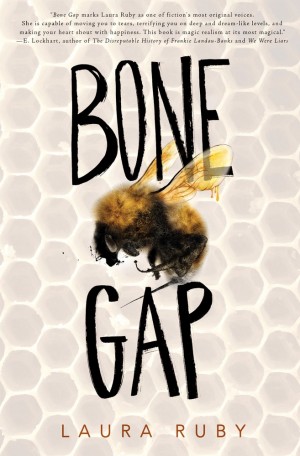 Everyone knows Bone Gap is full of gaps—gaps to trip you up, gaps to slide through so you can disappear forever. So when young, beautiful Roza went missing, the people of Bone Gap weren’t surprised. After all, it wasn’t the first time that someone had slipped away and left Finn and Sean O’Sullivan on their own. Just a few years before, their mother had high-tailed it to Oregon for a brand new guy, a brand new life. That’s just how things go, the people said. Who are you going to blame?

Finn knows that’s not what happened with Roza. He knows she was kidnapped, ripped from the cornfields by a dangerous man whose face he cannot remember. But the searches turned up nothing, and no one believes him anymore. Not even Sean, who has more reason to find Roza than anyone, and every reason to blame Finn for letting her go.

As we follow the stories of Finn, Roza, and the people of Bone Gap—their melancholy pasts, their terrifying presents, their uncertain futures—acclaimed author Laura Ruby weaves a heartbreaking tale of love and loss, magic and mystery, regret and forgiveness—a story about how the face the world sees is never the sum of who we are.

Why did I read this book:

Once upon a time, a rich, powerful and mysterious man falls in love with a woman and takes her away to a magical realm where all but one of her wishes are commands, everything she needs is available – from amazing rooms and castles to beautiful dresses and servants to give her anything she wants. All that he asks is for her to love him back. A romantic fairytale scenario for a beautiful woman who is desired above all.

Except she says no. She says no every step of the way.

Re-read that first paragraph knowing this, coming from this new perspective – how does that read now?

When beautiful Roza went missing from Bone Gap, no one believed she was gone without her consent. No one believed her friend Finn – the sole witness of her abduction – when he told of her mysterious disappearance especially because he could not describe her kidnapper in detail.

Now, months later, her disappearance still haunts Finn. It still troubles him because no one is looking for her, not even his brother Sean, who is supposed to love Roza.
Brought down by guilt, worry and fear, Finn carries on until all of those become impossible burdens to carry. He must find Roza and bring her back. A knight in shining armour? He would be, if Roza wasn’t also such a strong narrator and didn’t have such a superb voice and agency within this narrative. She is her own knight in shining armour too. They both are.

A lot of the narrative is from Finn’s viewpoint but the story goes back and forth between now and then, following Roza’s viewpoint as well as other inhabitants of Bone Gap including Petey, a girl who works with bees and who develops a beautiful if fraught relationship with Finn.

The thrust of the story depicts how Roza got to Bone Gap, how she stayed on then disappeared without a trace, how her life impacts the lives of those she left behind. More interesting to me is how the author was able to imagine, create, portray Roza’s impact to everybody’s lives without making her solely a puppet, a subject, a thing with no desires or agency. This is the story of Finn and Petey, of Bone Gap and above all, of Roza.

Without spoiling: there is a reason for Finn not being able to describe the captor. It makes for a very compelling and unreliable narrative.

Without spoiling: this is a Fantasy novel. The fantasy elements are part fairytale retelling part mythological journey into the underworld. I’ve seen this book described as Magical Realism: I strongly disagree.

Finn loves Roza and is moved by their friendship to go after her. No one believes he is not in love with her because she is so beautiful and surely they must have romantic feelings for each other.

He is in love with Petey. But no one can possibly believe that because Petey is so ugly and surely Finn only pities Petey. Even Petey believes that.

Finn is a great character. But Roza and Petey are amazing. Well-drawn, complex, diverse girls whose lives have been marred by the cruelty and carelessness of a world that puts a lot of stock on beauty. The different ways this has impacted them, shaped the way they interact with the world and their self-image is portrayed thoughtfully and with great sensibility without turning “beauty” into the source of all evil.

Bone Gap is a book about perspective. About the difference between looking and seeing. About fairytales, self-image, the heavy burden that beauty can be and the pernicious ways we look at and treat women. It’s awfully tense and there is this feeling of anxious momentum that runs through this novel. It’s also very romantic where it matters, empowering where it counts and beautiful in its telling. It’s a great companion book to be read alongside September Girls by Bennett Madison, A Wicked Thing by Rhiannon Thomas and Imaginary Girls by Nova Ren Suma.

A strong contender for a top 10 this year.

THE PEOPLE OF BONE GAP

THE PEOPLE OF BONE GAP CALLED FINN A LOT OF THINGS, but none of them was his name. When he was little, they called him Spaceman. Sidetrack. Moonface. You. As he got older, they called him Pretty Boy. Loner. Brother.Dude.

“Yeah, that boy’s nuttier than a honey cluster,” they might say. “But he’s a fine-looking nut. A sharp nut.Our nut.”

Finn, they were sure, had his heart in the right place. Just the way they did.

Eventually, though, they found out that there was a good reason for Finn’s odd expressions, his strange distraction, that annoying way he had of creeping up on a person. A good reason he never looked anyone in the eye.But by then it was too late, and the girl they loved most—and knew least of all—was gone.