Today, we have a double feature of old school goodness headed your way: Millicent’s Gift by Ann Rinaldi, and Ella Enchanted by Gail Carson Levine. 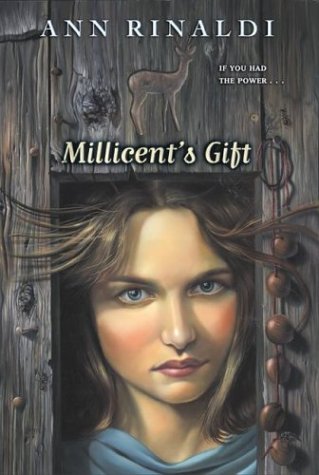 Millicent’s fourteenth birthday won’t be an ordinary day. In her family, turning fourteen means receiving a magical Gift: the ability to make one wish in life that will come true. But Millicent isn’t sure she’s ready for that kind of power. As her birthday draws closer, she realizes more and more how dangerous her magic is, and how difficult the choices ahead will be. Struggling with secrets, love, and betrayal, in the end Millicent has to make the hardest decision of all.

Why did I read this book: I stumbled across this book recently at The Strand when Ana was in town for BEA – I remembered that I *loved* a book by Ann Rinaldi when I was much younger, so naturally I scooped this book up instantly.[1. The Last Silk Dress!!! A YAish Gone with the Wind featuring a Southern Belle that undergoes some serious soul searching not only in terms of what she believes and the war, but with her family and place in the world, too!] This week, I decided to go with Old School fantasy enchantments and curses – Millicent’s Gift was a perfect fit.

Millicent MacCool is not your average teen. The youngest daughter in a long line of women, stretching back to 16th century medieval England, Millicent will come into her “Power” when she turns 14 – the point of great contention in Millicent’s Gift. You see, a “Power” is a strong piece of magic that can only be used once (I guess?), and can be openly accepted or rejected. Only those that have studied the old ways, have passed a great test of magic, and have refrained from telling any lies can come into their Power.

As Millicent’s birthday draws ever-closer, she faces pressure from her brother and legal guardian, Mac (who also happens to be the town’s righteous upstanding Sheriff). To Mac, the MacCool Power and magical gifts bring nothing but heartache and death, and he yearns for his younger siblings to have normal lives. Millicent, who has been homeschooled and training for her Power for years, faces a crossroads in her life – to accept the abilities and Power that is her birthright, or to reject it and live a normal life.

This is a very odd, bizarrely slow and starkly written novel. I love the idea behind the book and the concept of one great Power (really, it’s a Big Wish) and the idea of training for accepting this magic over the years. The magic in this book, however, is frustratingly vague and doesn’t ever quite make sense. For example, Millicent and one of her aunts can shapeshift, however this is not a large use of Power? Why can’t Millicent lie (how is that a barrier to magic?!)? Are we meant to believe that in all of her fourteen years, Millicent has never told a single lie?!

These frustrations said, I should clarify something: Millicent’s Gift isn’t really about magic. It’s actually the story of a young girl and her family D-R-A-M-A. It’s the story of a young teenager who starts going to public school and makes a toxic friend who abuses their relationship; it’s the story of family secrets, an absentee father, a dead sister, and a jealous brother. Heck, there’s a drug bust, robberies gone wrong, and even a shootout by the end of the book. And yet…for all this drama and action, Millicent’s Gift never quite manages to tie everything together in a compelling story. There’s a lot that happens, but I was never invested enough in the characters to actually care about what was happening. Similarly, Ann Rinaldi’s writing style is aloof and clipped which – while intriguing in the voice it creates for Millicent – felt distancing and offputting.

There are also a few red flags that went up over the course of reading this book – phrases and thoughts characters would have that are big Oh No Nos.[2. TM Tom Haverford.] For example:

“You act as if you have to save her from us,” Aunt Melanie accused.

“I’m sorry. I don’t mean to. You’ve all done a good job of nurturing and loving her. You’ve done the woman thing, and I’m grateful. But just don’t stop me from doing what I have to do. And don’t warn her off me. We’ll all do what we consider best for her, and may the best man win. Okay?”

“I’m gonna kick the crap out of that Dennis. He’s nothing but a faggot, anyway. If I’d been here last night I’d have laid him flat.”

I sighed. “Yeah, I know. But he’s not a faggot, just because he’s a hairdresser, Dex. That’s a stereotype and it isn’t fair. It’s not nice, either. He just had a little too much to drink.”

(A scene in which Millicent’s mom talks about magic)

“Are you telling me we’re part Cherokee now, too?” Dex asked.

“No. But the Indians are all very mystical. And so is this family.”

Needless to say, I was not impressed with this book – and considering it was published relatively recently in 2002? NOT OK.

Ultimately, I finished Millicent’s Gift wishing I hadn’t picked it up at all. While there were some good elements to the book – the pressures of living up to family expectations, the importance and distinction between telling the truth and doing the right thing, for example – this book couldn’t really pull it all together in a cohesive, meaningful way. This, compounded with the writing issues and some serious red flags mean that Millicent’s Gift is certainly NOT the book for me. 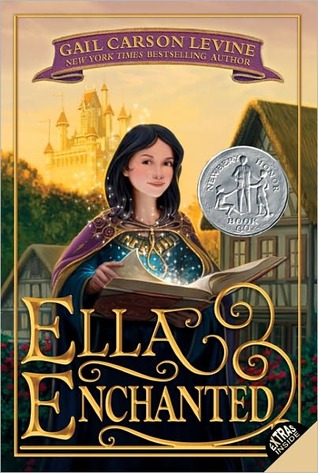 How can a fairy’s blessing be such a curse?

At her birth, Ella of Frell was given a foolish fairy’s gift—the “gift” of obedience. Ella must obey any order given to her, whether it’s hopping on one foot for a day or chopping off her own head!

But strong-willed Ella does not tamely accept her fate. She goes on a quest, encountering ogres, giants, wicked stepsisters, fairy godmothers, and handsome princes, determined to break the curse—and live happily ever after.

Why did I read this book: After the bad taste that Millicent’s Gift left in my mouth, I was hopeful that Gail Carson Levine’s much beloved MG novel Ella Enchanted would be the perfect antidote for my reading slump. I confess that this is the FIRST book I’ve ever read by Levine, and that it took me so long to get around to this one because… well, I’m not a fan of Anne Hathaway, and the movie trailer looked terrible. I know, that is a rotten reason not to read a book. Argh. My fault. Completely my fault.

When young noblewoman Ella is born, she receives a magical gift from a feckless fairy named Lucinda: obedience. This “gift” however is truly a curse, for Ella must do ANYTHING that is ordered of her. Should someone tell Ella to assist with the laundry or go to bed, she must comply. Should somebody order Ella to throw herself into an Ogre’s cooking fire, or eat chocolate cake until her stomach explodes, or lop off her own head, she must do so. In short, Ella’s curse is dangerous, indeed. Only two people – Ella’s beloved mother and dear family friend and cook Mandy know of Ella’s curse, for Ella’s own protection.

But just because Ella is blighted with a dangerous, foolish gift and forced to carry out any order doesn’t mean that she is without her own free will or opinions. No, Ella is clever, unimaginably strong-willed, and finds ways to rebel against those who discover her secret. And, when the fate of the Kingdom is on the line, it is Ella who must break her own curse and save the one she loves.

Oh, friends. How has it taken me so ridiculously long to read this book? This Newbery Honor book? I’m happy to say that Ella Enchanted is every bit as charming and winsome as I hoped; but more than that, it’s actually a powerful and empowering read. The premise alone is superb: take a heroine and strip her of her free will in such a way that she knows she’s being stripped of her will, and actively finds any way to rebel against the magic that binds her. You’d think that Ella’s obedience might equate to a lack of agency – but in fact it is just the opposite. DUDES. I adored Ella. I love how she would find little ways to resist and subvert her orders (like the time Cook Mandy orders Ella to hold a bowl while Mandy beats the eggs, and Ella would hold the bowl but walk around the kitchen aimlessly such that Mandy would have to follow her around). Ella’s fierceness and her desire for freedom is a driving force in the novel, especially when she runs into the worst possible people who discover her secret.

Did I mention that this is also a proper fairy tale and a take on – wait for it – Cinderella? I won’t reveal too much about this retelling aspect of the story, but suffice it to say that Levine’s twist is every bit as wonderful, sweet, and empowering as the rest of the book. (Ok one slight spoiler: Ella is the one that saves the Prince, naturally.)

There was only one major thing that detracted from the book, to me. The “evil stepsisters” are stereotypically portrayed as greedy, overweight, and extremely dim-witted (to the point of being uncomfortable – in a making fun of someone with a serious learning disability kind of way); of course, they are also as ugly as they are unkind. I was hoping for a little more depth and sympathy or understanding of these characters, but while we get a bit of backstory and depth, Hattie and Olive are sadly one-note.

That criticism said, I truly loved Ella Enchanted. I cannot wait to read more from Gail Carson Levine – anyone have any suggestions on what to read next?

Reading Next: Truth or Dare by Jacqueline Green