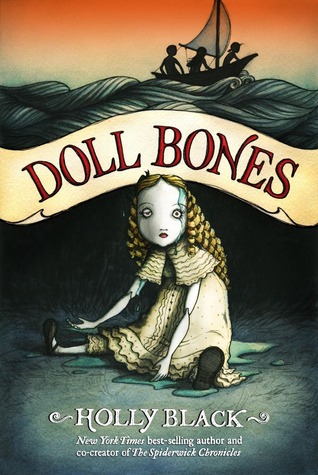 Zach, Poppy and Alice have been friends for ever. They love playing with their action figure toys, imagining a magical world of adventure and heroism. But disaster strikes when, without warning, Zach’s father throws out all his toys, declaring he’s too old for them. Zach is furious, confused and embarrassed, deciding that the only way to cope is to stop playing . . . and stop being friends with Poppy and Alice. But one night the girls pay Zach a visit, and tell him about a series of mysterious occurrences. Poppy swears that she is now being haunted by a china doll – who claims that it is made from the ground-up bones of a murdered girl. They must return the doll to where the girl lived, and bury it. Otherwise the three children will be cursed for eternity . .

Why did I read this book: I like Holly Black’s books (although I still need to catch up) but it was the creepy cover and the fact that this was middle grade that made me want to read it.

Zach, Poppy and Alice are friends who have known each other for ever. The three love coming up with awesome stories and to play them out with their action figure toys. Their current story follows pirate William the Blade and his ally the thief Lady Jaye on a quest for The Queen, “played” by an ancient china doll. When they reach a point when William the Blade is about to find out the truth about his past, the unthinkable happens: Zach’s father throws away all of his action figures because according to him, at 12, Zach should no longer be playing make-believe.

Zach is furious but also ashamed and confused and instead of talking to his friends, he closes himself off and stops playing with them altogether. But then one night the girls show up at his house saying Poppy has been contacted by the ghost of The Queen – who claims that her soul is trapped in the china doll which has been made from the bones of her murdered body. The only way to free her (as well as the kids from its haunting) is to find where the girl used to live and bury the doll.

Adventure ensues as Zach, Poppy and Alice run away from home and go on their – this time, real – Quest.

Doll Bones was not quite what I was expecting. I thought this was going to be a good old romp with a strong horror bend. And in a way it was: there is a lot of fun adventure to be had and the doll is genuinely creepy especially since, for most of the book, we (and the characters) are not really sure if this is all happening in reality or only in their imagination.

But those aspects are almost bare foundation from which the author builds a story with a stronger focus on the relationship between the three kids and the importance of storytelling and creativity. Above all, I feel this is a tale about three kids on that threshold between childhood and adolescence and one that is deftly, thoughtfully handled by Holly Black here.

Zach’s father’s thoughtless action of throwing away his toys propels the story in a very interesting way. It is an outside force that informs internal conflict: adults telling kids they can be no longer kids and that their hobby of choice is childish and undesirable. The kids have to grasp this idea, and choose whether they internalise it or question it. There is a very interesting conflation here between the toys and their ability to continue with their game. Zach for example, believes he can’t play without them. But are the toys an essential part of their game or just tools? Similarly, Poppy, Zach and Alice are in that moment that growing up is just around the corner but not for all them at the same time or in the exact same way – Poppy for example is still desperately trying to hold on to what they have now, whereas Alice and Zach are almost eager to embrace change. Do finding new ways of interacting with the world, becoming interested in different pursuits as well as forming friendships with other people mean that their interaction need to change or that their friendship is no longer meaningful?

The answers to those questions are not clear-cut and in the end there is a feeling that things will have to inevitably change but not necessarily in a fundamental way. Storytelling, creativity, role-playing is something that can be equally important to adults and teens as it is to children. In addition to all of this, each kid’s family is also extremely important in how they interact with the world and I thought really interesting how each kid had a different background which created a more dynamic and diverse story. I really appreciated that Zach’s father’s action is addressed in the story very nicely and with unexpected poignancy.

In the end, Doll Bones turned out to be not as creepy as expected but more thoughtful than I was hoping. All in all, a very good read.

“No, you’re right,” Poppy said, her voice speeding up and getting louder, like she was afraid she was going to be cut off before she got it all out. “It’s not fair. We had a story, and our story was important. And I hate that both of you can just walk away and take part of my story with you and not even care. I hate that you can do what you’re supposed to do and I can’t. I hate that you’re going to leave me behind. I hate that everyone calls it growing up, but it seems like dying. It feels like each of you is being possessed and I’m next.”

Reading Next: A Stranger in Olondria by Sofia Samatar