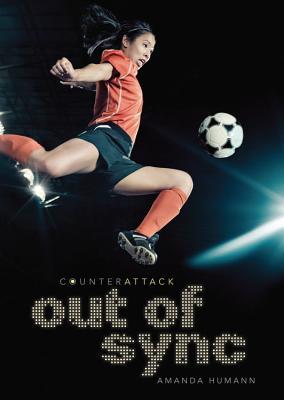 Title: Out of Sync

Since they were six-year-olds, Madison and Dayton have had soccer sync. Maddie doesn’t have to see her best friend on the field to know where she’ll be. Her passes to Dayton are perfect, as if the two of them can read each other’s mind. Together, they’re a scoring machine. There’s only one problem: lately, Dayton seems more interested in partying than playing soccer. And Dayton’s change of heart couldn’t have come at a worse time. Now that she and Maddie are sophomores, they have to really focus–or they’ll have no chance of making it to a Division I college team. Can Maddie get through to her best friend? Or will the scoring machine break down?

Stand alone or series: It is part of an ongoing series but can be read as a standalone

I first noticed Out of Sync when browsing Netgalley and I liked the sound of this female-centric sports story. The striking cover with a PoC on it clinched it for me. What I did not know is that Out of Sync is actually a novella, part of an ongoing series. But I will get back to that later.

Best friends Madison and Dayton are high school sophomores and dedicated soccer [1. Since this is a novella that takes place in the US I will keep the name as “soccer”. As a Brazilian though, how it pains me not to say “football”.] players who are attempting to make it to a Division I college team. Ever since they were children, they have had this wicked soccer sync, their passes to each other perfect, their connection on and off the field something that Madison believed would last forever.

But lately, Dayton seems to be unfocused, losing interest in playing soccer and missing important training sessions. Worst of all for Madison is the fact that their soccer sync is off for some reason. Is that a passing thing or is there something else afoot with Dayton?

Out of Sync is a very straightforward novella that doesn’t do much more beyond the summary above in terms of its story. What it does do really well though, is to portray an awesome group of girls, who are friends on and off the field and who are really serious, dedicated soccer players. The latter is done well, without making them “special”: as such, they are not portrayed as excepto-girls at all or compared to non-sportive girls. This is all the more obvious in the way that Dayton’s growing detachment from soccer is explored by showing her moving on to other things without making that decision contrast negatively to Madison’s lingering passion for the game and her utmost dedication to it.

The emotional make-up of the novella is Madison’s realisation that as a serious soccer player she cannot, should not rely on her connection to just one player and to accept that Dayton’s decision does not necessarily mean their friendship is over.

There isn’t a lot more I can say about the novella beyond these points. As I said, it is very straightforward and simply written. Which brings me to the point about it being a novella in an ongoing series called Counterattack. 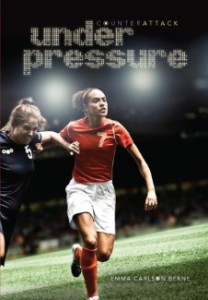 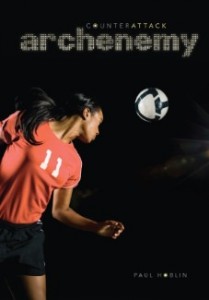 Published by Darby Creek, a division of Lerner Publishing Group, the idea behind it (and one that I absolutely love) is to create a series of ethnically diverse, accessible novellas for reluctant teen readers covering pressures and controversies of high-level girls’ soccer. In that sense, considering those goals, this is actually really successful in what it sets out to do. And even though, as it turned out, I am not the right the audience for this, I still enjoyed what I read and saw.

Reading Next: The Crane Wife by Patrick Ness