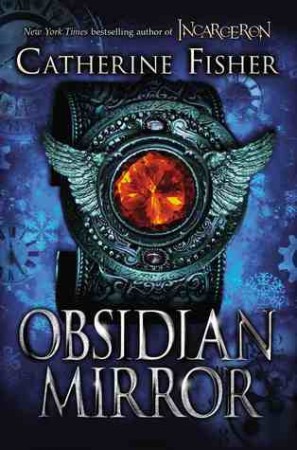 The obsidian mirror. Its power is great and terrible. Men have been lost in it, the dead brought back to life through it, and the future annihilated by it. Or this is what will happen unless the mirror is destroyed. Three people seek the mirror: the first has been sent from the future to shatter its power; the second will protect the mirror at all costs, obsessed with its power; and the third needs the mirror to find a murdered father and save his life. But only one can succeed.

The mirror can send you to the past, but it will not bring you back.

With superb world-building that includes the real world, the faery world, and a dystopic future, this hauntingly astonishing adventure is the start of a new trilogy from the master of the sci-fi/fantasy genre, Catherine Fisher. Fans of Orson Scott Card, Shakespeare, Grimm, and Blade Runner won’t be disappointed.

Stand alone or series: Book 1 in the Chronoptika series

Why did I read this book: I am a big fan of Catherine Fisher’s writing – I loved Incarceron and Sapphique, and also enjoyed her Relic Master series (originally published years ago in Australia and the UK, but only recently repackaged and released in the USA). When I learned Fisher had a new series in the works, I was thrilled.

Jake Wilde is an angry young man. Following his father’s mysterious disappearance years earlier, Jake’s life is thrown into a tailspin. Abandoned by his mother, Jake’s new guardian is Oberon Venn – the enormously wealthy reclusive scientist, who immediately sends Jake away to a prestigious and expensive boarding school in Switzerland. While Jake has never met Venn, he knows beyond any doubt that Venn is behind his father’s disappearance: Jake knows that Venn killed his father, and vows to have his revenge.

When Jake is expelled from school (all according to plan, of course), he heads to Venn’s isolated woodside estate, escorted by one of his former teachers. It is here that he comes face to face with his mysterious guardian for the first time, and learns that there is much, much more to his father’s story, and to Venn’s. Here, Jake also meets Sarah – an escaped patient from a nearby mental institution, masquerading as the niece of Venn’s manservant Piers – who has a singular mission of her own.

Pitted against Jake, Sarah, and Venn, however are significant, frightening obstacles – there are the Shee, who will never stop trying to take the manor, and whose queen is obsessed with Venn. There is Sarah’s pursuer, a powerful, frightening Replicant and his wolf. And there is the mysterious, scarred man, who will stop at nothing to get back his stolen property back, once and for all.

At the heart of all these tangled relationships, lies, and pursuits is the Chronoptika – an obsidian mirror, and a powerful artifact that has the ability to open holes in time itself.

The first book in a new series, The Obsidian Mirror is another trademark Catherine Fisher work that blends science fiction and fantasy. Unfortunately, unlike the Incarceron duology or the Relic Master books, The Obsidian Mirror does not quite manage to blend these two subgenres convincingly, and suffers under the weight of its own excesses. Ultimately, the problems with The Obsidian Mirror can be boiled down to three core issues: there are too many disparate threads to the novel, there isn’t enough time spent developing the (many) different characters, and the novel is both confusing and strangely paced.

Let’s start with the disparate threads. The book involves not only time travel and an obsidian mirror, but also includes the following:

Needless to say, there is a LOT going on in The Obsidian Mirror, and a basic, vital rule of SFF is broken (repeatedly) by Fisher in this book: suspension of disbelief is impossible, because there is far too much going on. Any of these factors taken alone – or even a handful of these in combination – would make fodder for a fascinating blend of genres and tropes. All of them together at once is confusing and unsuccessful – but more than that, the dizzying combination leads, inevitably, to unresolved threads. Why, for example, were the Shee involved in this story at all?

Exacerbating the clumsy worldbuilding is the strangely slow-moving plot. While The Obsidian Mirror starts off with a bang (actually, a clash of stage swords and some blood, to boot) and the core premise behind the book is strong, the plot is actually incredibly stilted. We don’t even see the titled mirror until about 200 pages into the book, at which point the story kinda-sorta decides to kick it up into second gear. Before this, there are plenty of coldly menacing Looks, a lot of sneaking around, stealing and reading secret journals (interrupted frequently by more menacing Looks), and so on and so forth.

Also compounding The Obsidian Mirror‘s problems is the writing, which is simultaneously awkwardly jerky and melodramatic. And, unfortunately again, the latter trait also describes the main characters in the text. Jake is narcissistically self-righteous and stubborn, characterized solely by his Uncontrollable Anger and grim, repeated pronouncements that he will make. Venn. PAY. (This is to say nothing of Jake’s incredible leaps of logic coming to the conclusion that Venn killed his father) Venn is defined by his coldness and single-minded dedication to save his wife Leah; schoolmaster Wharton is defined by his exasperated with Jake; Sarah, perhaps the most rounded of the bunch, gets little time actually devoted to her character and mission, as she’s constantly fidgeting/hiding, on the run from those forces hot in her pursuit. All that is to say, there is no real connection with these characters, who feel more like caricatures, because there is so much jumping around and so many moving parts to the cumbersome story.

While there are some compelling bits to The Obsidian Mirror – I enjoyed the premise of the book, at least (and, once the story finally kicks into action by the last 80 pages or so when the actual time travel finally happens) – there are too many issues with the writing, characters, and plot to truly recommend it. Sadly, this newest Fisher book is a miss for me, and I don’t think I’ll be back for more.

The boy put on the mask outside the door. It was a heavy black fencing mask and inside its mesh he felt different.

It mad him dark, supple, dangerous.

He was wearing the costume for Hamlet, Act 5, the duel with Laertes, and he had the fencing sword ready in his hand. He had to be very careful. This could all go badly wrong, and not just in the way he wanted. He took a deep breath, and peered in through the glass panel. The rehearsal seemed to have paused; people were sitting around and Mr. Wharton was explaining something, waving an arm expressively to Mark Patten who was playing Laertes.

Reading Next: The Cup and the Crown by Diane Stanley

Book Review: A History of Glitter and Blood by Hannah Moskowitz