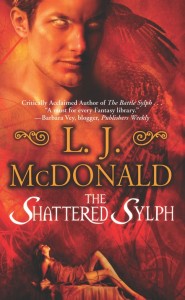 Stand Alone or series: 2nd Book in a Series

Years after Eferem and the battle on the Cliffs, Ril is a free Sylph, living with the man he still calls his master in Sylph Valley. Only Ril doesn’t care about his freedom. Instead he’s a broken creature, crippled in that final battle and, in his own mind, useless.

However, when Leon’s oldest daughter Lizzy is kidnapped by slavers and taken halfway across the world, Ril is the only one who can track her. Together, he and Leon follow to a world alien to both of them, following a bond Ril’s not willing to admit to, even in the depths of his own heart.

Why did I read the book: If you recall, I read book numero uno in the series and fell in love. It was quite romantic. Me, on a chair, near the fire place, with light from the fire on the pages and the magic happening between the covers. So, why the heck not repeat?

How did I get the book: Aha. Ana tricked the bad Post Office and its conspiracy by sending it along with last month’s pick and next month’s pick. Now, I am most certain that the Post Office is planning on revenge, but let’s worry about that happening in June.

I will whisk you away on a magical journey through lands of wonder, magic and cruelty. I’m not kidding. It was magical. L.J. McDonald snares you up, drags you from your cozy chair and saddles you in break-neck paced story for the second time with her second book in series “The Shattered Sylph”.

What I loved is still present. McDonald continues to impress with well constructed characters in a packed, dynamic chain of events, while she teleports from narrative to narrative in what seems nanoseconds. As you know, this technique makes for a fast reading, but as with the first book, it is exhausting and certainly doesn’t allow for a moment, in which the reader can take a break. This is beyond staccato, people.

Let’s see, now. In “The Battle Sylph” we left Solie, who had become a hive queen, in the newly formed Valley of the Sylphs to rule the people and their sylphs. Several years pass before the events in “The Shattered Sylph” can take place. The limelight, however, graces Leon’s family. Lizzy has grown into a spirited, if not entirely sensible, young woman and it’s her wanderlust that has her reduced into a slave, shipped off to the corrupted Meridal Empire in the South and ends in the harem, devised especially for the needs of the Empire’s Battle Sylphs. In the mean time Leon [her father], Ril [his Battler], and Justin [the youth, who wants to marry Lizzy, but is also to blame for her abduction] embark on a three man rescue mission.

“The Shattered Sylph” promises a fairly simple plot, but we are treated to a complex network of entwining narratives, which make the escape seem like Mission Impossible meets Oriental folklore ala 1001 Nights. Through Lizzy’s eyes we see the face of Meridal, which is ingenous as it is cruel. McDonald goes through lengths to emphasize that her world is not restricted to the already established cannons and the relationships between master and sylph as well as the sylph’s practical applications can be stretched to as far as the imagination can go. Meridal is an oasis in the dessert, because of the utilization of sylphs as remote controlled assets and in order to keep up the inventive productivity of sylphs people are turned into slaves [Feeders] with their tongues cut out or are locked inside harems to satisfy the sexual urges of Battlers.

The worldbuilding stunned me and kept me turning pages. Lizzy’s life as a concubine, though monotonous, immerses the reader into the sense of captivity, the dangerous small acts women and Battlers alike perform to create brinks in the flawless prison. In this sense, McDonald is a natural at portraying demographics. Leon’s struggles to remain unseen in Meridal introduce the reader to the lower classes in this society, who are starving and mistreated as much as the sylphs are. But how the hardships have opened their hearts to charity. Through Ril’s captivity as the Empire’s favorite, we sense the decadence with which Battlers are treated as gladiators and executioners.

‘But why do you stall, Harry? All this world-building is awesome and such, but we want the romance.’ *imagines the audience groan*

Be patient, faithful readers, for the romance cometh. I wanted to build suspense. As you may have gathered, Lizzy gets it on with Ril. In “The Battle Sylph” McDonald alluded towards a possible love interest between the two, but since Lizzy was twelve at the time, the reader had to wait until the romance could be considered legal. Unlike the love story between Solie and Heyou, Ril and Lizzy unite somewhere in the middle and although they have physical contact, the focus falls on the inner forces within their hearts. While Solie and Heyou had to withstand outside forces [not get killed], Ril has to come to terms with his self-esteem after the crippling events from “The Battle Sylph” and Lizzy has overall doubts whether Ril has any feelings for her. An extra tension is created, when Leon enters the picture. Because he is Ril’s master, he can order the battler to stay away from his daughter. In a sense, there is an emotional triangle between Battler, master and daughter, which I find endearing. You’ll love it.

I found that Justin as a character was redundant. It was obvious from the moment he let Lizzy be kidnapped that he had no place in her life. I felt from Lizzy that Justin was not going to be her choice for a man. His inclusion in the rescue mission seemed pointless, apart from acting as a contrast for Ril to shine. Most of the story he is useless. Justin remains in captivity, while Ril and Leon actively try to help Lizzy and throughout the story he is largely forgotten. Even in the end, he is not mentioned much, only as an afterthought.

Also, there is an issue with a déjà-vu. In “The Battle Sylph” Solie becomes queen and through her reign she rights all the wrongs done to the oppressed and creates a miniature haven for the good people. In “The Shattered Sylph” Meridal falls because a harem slave ascends to status of a queen and rights all the wrongs. It’s a given that this was a subplot and it received enough foreshadowing to not slam the reader as a dues ex-machina, but I hope the third installment does not rely on this model of problem solving.

Verdict: The Shattered Sylph remains a pleasure to read like its predecessor. It can be funny, dynamic, scary, emotional and engrossing. Sure, there are a few kinks here and there, but overall a good addition to your library.

Reading next: “Sunrise in a Garden of Love & Evil” by Barbara Monajem