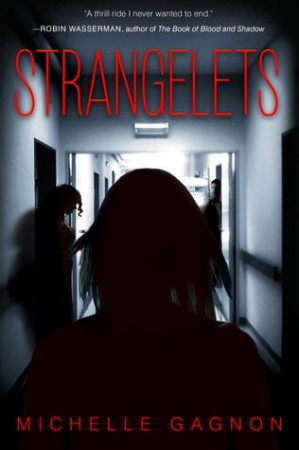 17-year-old Sophie lies on her deathbed in California, awaiting the inevitable loss of her battle with cancer…
17-year-old Declan stares down two armed thugs in a back alley in Galway, Ireland…
17-year-old Anat attempts to traverse a booby-trapped tunnel between Israel and Egypt…

All three strangers should have died at the exact same moment, thousands of miles apart. Instead, they awaken together in an abandoned hospital—only to discover that they’re not alone. Three other teens from different places on the globe are trapped with them. Somebody or something seems to be pulling the strings. With their individual clocks ticking, they must band together if they’re to have any hope of surviving.

Soon they discover that they’ve been trapped in a future that isn’t of their making: a deadly, desolate world at once entirely familiar and utterly strange. Each teen harbors a secret, but only one holds the key that could get them home. As the truth comes to light Sophie, Declan, Anat, and the rest must decide what to do with a second chance at life—if they can survive to claim it.

Why did I read this book: I was in the mood for a scifi thriller, and Strangelets sounded like JUST the ticket.

In Palo Alto, California, every breath seventeen-year old Sophie Page takes is numbered. Suffering from a cruel and rare form of cancer, she hovers on the brink of death in a hospital room with her family suffering silently in the wings.

In Galway, Ireland, the charismatic rogue Declan Murphy finds himself cornered in an alleyway after stealing some goods from a very dangerous man. Facing the barrel of a gun, seventeen-year old Declan has only moments to live.

In Rafah, in the southern Gaza Strip, the hardened Anat Erez makes a daring choice to leave her family and home in Tel Aviv to be with the Palestinian man she loves. As she makes her way through the underground passageway connecting Rafah to Egypt, the tunnel threatens to cave in – seventeen-year old Anat is just moments away from certain death.

Sophie, Declan, and Anat – three teens that should have died at the exact same instant – find themselves inexplicably alive, awaking in an abandoned hospital ward. Disoriented and frightened, the teens discover that they are not alone, and must work together if they are to find out where they are, why they are there, and a way home.

A teenage version of the show LOST cross-pollinated with the melodramatic awesomeness of The Twilight Zone, Michelle Gagnon’s newest novel Strangelets is an entertaining – albeit wholeheartedly ridiculous – dystopian scifi thriller. The premise of the book is fantastic and bound to pique the interest of even the most jaded SFF fan; the idea of teens all dying at the exact same instant, thousands of miles apart from each other only to awaken in a hollow shell of a world is a sweet, Schrödinger’s Cat kind of starting point for a book.[1. Like any LOST or Twilight Zone episode, there’s the potential for pure, unfiltered awesomesauce with this kind of premise. Of course, the cat could be dead, too.] Of course, with every intriguing premise there comes the hefty price of delivery; as with any good hook, a story must live up to its setup and promise.

Strangelets falls somewhere in the middle of the success spectrum, entertaining ideas that range from purgatory-stopovers to parallel-universes and time travel. Ultimately, Gagnon settles for the pseudo-scientific as an explanation for her setup, claiming miniature black holes and the many-worlds interpretation of quantum mechanics (including distant worlds on which dinosaur-like creatures walk and hunt).[2. You knew the dinosaurs had to come in eventually, right? These are telepathic dinosaurs from a distant planet. If that doesn’t capture your attention, I don’t know what will.] The end result is… mixed. The scientific “reason” behind the main characters’ predicament is never really satisfactorily explained; for that matter, any explanations that emerge come from the mouth of an honest to goodness mad scientist, full of ALL the regrets and hubris. Don’t even get me started on the resolution to the book, and the final fate of our intrepid trio of protagonists.

On that note, the characters of Strangelets are – like LOST – varied in nature and in appeal. While the book follows a core trio of characters with Sophie, Declan and Anat, there are three more new characters to which we are immediately introduced in the same boat as our heroes – the reserved Japanese girl Yosh, the small and friendly Indian boy Zain, and the broad-shouldered, blonde, blue-eyed Swiss young man, Nico. Each has their own backstory and secrets, and the group dynamic is nicely varied. Declan’s charisma is wonderful, as is Anat’s harsh, no-nonsense toughness. I infinitely preferred Anat to the physically and emotionally wobbly Sophie.[3. Of course the bland everygirl Sophie is the character that finds love with one of the boys in the story. Predictable.] Similarly, I appreciate Gagnon’s attempt at diversity in the cast with characters of color that range from many different continents. That said, there IS a potentially worrisome, stigmatic portrayal of the characters of color (Anat, Zain, and Yosh) – one of these characters is the first to die, the other a villain, and the other meets a sad, cruel fate. Meanwhile for the white characters (Sophie, Declan, Nico), one holds the key to understanding everything, and two live happily ever after.[4. The book does abide by the many-worlds theory, so – in theory – there are universes where these characters do not meet these same fates. Having said that, Gagnon chooses to tell this particular story – in which the non-white characters have disproportionately crappy outcomes. Not cool.]

Ultimately, Strangelets is a superficially fun read – a good, forgettable poolside or airplane diversion. That said, the significant issues with the portrayal of the characters of color make it hard for me to endorse it.

In Book Smugglerish, this would have been a 6 miniature black holes out of 10, but because of the character issues, drop that down to a 5.

And at the foot of her bed was . . . a circle. Technicolor? No. Not bright enough. Not light, exactly, but not dark, either. Sophie was transfixed by it. Every color imaginable, whirling in a dizzying gyre. It started as small as a pinhole, rapidly increasing in size until it was the size of a loaf of bread, then a car. As it grew, it drew the contents of the room inexorably inward. Sophie wanted to call out to her family and ask if they were seeing it, too, and maybe knew what it was. But she was as immobilized as they were, heavy—and this was it, she realized. This was how she was going to die.

Reading Next: The 5th Wave by Rick Yancey

Book Review: She Is Not Invisible by Marcus Sedgwick

Book Review: Every Heart a Doorway by Seanan McGuire