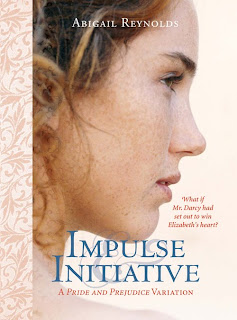 Stand Alone/ Series: This is a variation of Pride of Prejudice by Jane Austen – I recommend you read that one first.

Summary: In Jane Austen’s Pride & Prejudice, Mr. Darcy gives up on winning the woman he loves after she refuses his proposal of marriage. What if, instead of disappearing from her life, he took the initiative and tried to change her mind? In Impulse & Initiative, Mr. Darcy pursues Elizabeth Bennet to her home in Hertfordshire, planning to prove to her he is a changed man and worthy of her love.

Why Did I Read The Book: I was offered a copy by the publisher, SourceBooks and I had to say yes – I do so love Pride and Prejudice.

It is a truth universally acknowledged that Pride and Prejudice by Jane Austen is one of the best known books of all time (a BBC survey has placed it in second in the list of UK’s Best Loved Books) and loved by many romance readers including yours truly. Elizabeth Bennet and Mr Darcy certainly figure high up there with Romeo and Juliet and Heathcliff and Cathy in the classic love stories listings. There are plenty of movie and TV adaptations (like the 1995 BBC series – Colin Firth anyone?) and more recently, from what I can gather, a plethora of books with story variations.

Impulse and Initiative is one such book. In the original novel, after many sequences in which it appeared that Darcy and Elizabeth were in opposite sides, the seemly arrogant Mr Darcy proposes marriage to a bewildered Elizabeth Bennet who could not have expected the high-born, proud man to love her. Darcy completely mucks up the proposal by telling her that he loves her “against his own will” and despite her family. Elizabeth who has reasons to believe, incorrectly, that Mr Darcy is not honorable, refuses him and tells him that he is “the last man in the world whom she could ever be prevailed on to marry”. Darcy is mortified that she would say such things and the next day delivers a letter to her clarifying the points that would dispute his honor and disappears from the novel for some time until they come together again in later chapters.

Impulse and Initiative plays with a “What If” that starts right after that first proposal – what if Darcy, instead of retreating decided to go on the attack by trying to woo Miss Bennet’s affections properly? By showing her that he was indeed honorable, that his intentions were true and out of deep love and that he could find in himself the strength to review his actions, the ungentlemanly way he proposed, the arrogance of his treatment of others and become in the eyes of the reader (and of Elizabeth) the more open character that appears at the end of Pride and Prejudice.

Leaving all thought of emotional restraint aside, Darcy embarks on a rather persistent pursue of Elizabeth who is conflicted to begin with – does she like or dislike Darcy? Can she really enjoy the time she spends with him even if he is proud and overbearing and threatens the independences she loves? And what about those *gasp * kisses and what they do to her? Are they proper? Should she even like kissing a man that is not her husband? These and other questions are raised and answered as their relationship progresses based this time, not in pride and prejudice but as the title implies, on impulse, initiative – and seduction. Be it of the mind for truly, they share a similar wit, and one of the greatest points of this novel is the banter between Darcy and Elizabeth or the moments where they hurl literary quotes at each other or their common tendency to judge based on wrong assumptions. Or of the body, where a less than controlled Darcy can hardly keep his hands off her – which leads them to a pre-marital encounter that raises the question: is this truly how the original Darcy and Elizabeth would behave since both characters were so bound by their sense of propriety? In fact, one may argue that the Darcy and Elizabeth in Impulse and Initiative end up acting like the Villain (Wickham) and the Floozy (Lydia) of Pride of Prejudice.

If you are a Jane Austen purist or a literary traditionalist you should probably stay away from the book (or from any variation, as a matter of fact) as the Darcy and Elizabeth portrayed here are hardly like the original creation of Jane Austen.

But on the other hand, if you like me, think you would like a sweet, double sugar-coated (Darcy is so sweet here it made my teeth ache as he would profess his undying love at every chance he got which was VERY often – this, the only real problem with the book for me) conflict-free “what if” involving two beloved characters from literature – and follow an alternate story from wooing to bedding, from pre-marriage to wedding and birthing of their first child – who even though not quite like Austen’s creation are still interesting enough to warrant a few good hours of your time on a Saturday afternoon, then by all means do pick this up. You could do much worse than this – much, much worse.

Notable Quotes/ Parts: I like the moment where Elizabeth realises that Darcy is always taking care of people and is never taken care of.

“A smile curved her lips as she considered the hubris it would require to take on the responsibility of taking care of Fitzwilliam Darcy. Continuing to stroke his hair, she let her eyes trace the lines of his face, wondering at her sanity in allowing herself to love this complex and often difficult man -as if she had allowed herself to love him; the truth was closer to what she had said of him at Hunsford, that she loved him against her will, against her reason , and even against her character. It was certainly poetic justice. “

And oh dear lord how I laughed at the scene where Darcy and Bingley were talking about – ahem – pre-marital encounters and how Bingley was thoroughly jealous of Darcy as up to that point all he was allowed to get from Jane was a chaste peek at the cheek. And how Jane was completely horrified when she learns from Elizabeth that –ahem- the marital bed? Not as bad as their mother told them.* wink wink nudge nudge *

Additional Thoughts: On the subject of Pride and Prejudice variations, I recently watched ITV’s Lost in Austen and it was a complete riot – so much fun. I wrote about it here.

But I ask – how do you feel about variations of literary works? Do you think the originals are “untouchable”?

Verdict: Sweet (sometimes too sweet), funny with witty banter and good writing. If you think you can get past a Darcy that professes his love at every other paragraph, this is the book for you. It certainly helps if you picture Darcy’s smoldering dark looks in a Colin Firth package.

Reading Next : The Graveyard Book by Neil Gaiman