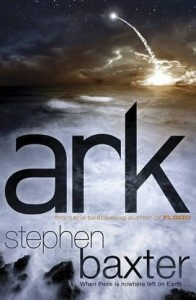 Stand alone or series: Book 2 in a duology, following Flood.

Why did I read this book: Despite a slow start and a strange sense of complete detachment, I ended up loving Stephen Baxter’s Flood, the first book in this apocalyptic duology. I loved it so much, in fact, that it is on my shortlist of favorite books of 2009. So, when I found out that Ark was being released in the UK this August, I was thrilled – and immediately begged Ana to procure me a copy. And she did. Good Ana. Gooooooood Ana.

Summary: (from amazon.com)
As the waters rose in FLOOD, high in the Colorado mountains the US government was building an ark. Not an ark to ride the waves but an ark that would take a select few hundred people out into space to start a new future for mankind. Sent out into deep space on an epic journey centuries, generations of crew members carry the hope of a new beginning on a new, incredibly distant, planet. But as the decades pass knowledge and purpose is lost and division and madness grows. And back on earth life, and man, find a new way. This is the epic sequel to the acclaimed FLOOD; a stirring tale of what mankind will do to survive and the perfect introduction for new readers to one of SF’s greatest tropes; the generation ship. Written by one of the most significant SF writers of the last 30 years, a man considered to be the heir of Arthur C. Clarke as a writer with a unique ability to popularize science and science fiction for the largest possible audience FLOOD and ARK together form a landmark in modern SF.

I have discovered a new “autobuy” author this year, and Stephen Baxter is his name. I cannot quite explain what it is about his writing that simply works for me. Objectively, I can see that his work is rather verbose and bleak, and at times very dense which can put off many readers. In fact, this often puts me off many authors. But there’s something about his books that hit all the right buttons for me. Perhaps it’s the scope of his writing, blending human elements with the harder elements of science fiction. Perhaps it’s the cool – almost cruel – impassivity he shows his protagonists. Perhaps it’s some mystical, perfect blend of the two that I find irresistible. The point is, I have become a full-fledged fan. Ark, along with Flood easily makes the shortlist of two of my favorite novels of 2009.

Overlapping and following the events of Flood, the first book in this duology, Ark tells the story of the birth and culmination of a top secret project to send a genetically diverse, brilliant group of young humans away from the flooded and dying Earth, to travel that final frontier of space – to explore strange new worlds, to seek out new life and new civilizations, to boldly go where no man has gone before. In a long-shot hope to save the human race and rebuild on an as of yet unknown planet, Ark is the story of how the Ark One was conceived, how it left Earth, and the fate of those on board. While Flood is a dramatic apocalypse novel documenting the systematic flooding and the end of the world by water as a subterranean sea reservoir covered all the land on the face of the planet, Ark is a science fiction story about humanity’s last ditch effort to prevail. Following two main characters, Grace, a dejected, tired and hopeless woman whom readers will remember from Flood, and Holle, groomed since childhood for a chance to get on Ark One, Ark is a visceral, intelligent, tragic, and ultimately hopeful novel about the end of the world, and how humanity endures.

As with Flood, and as I suspect might be indicative of all Stephen Baxter’s work, Ark is a story with an incredible sense of scale and scope. Beginning with a six-year old Holle who makes it to the Colorado Rockies with her father in the year 2025, Ark spans fifty-six nominal years and a distance of over one-hundred light years, to the fate of the remaining members on the Ark in 2081. When a small group of far-sighted and very wealthy men move to Denver as the last stronghold of high land in a flooded America and water-logged world, they learn that the water will not stop rising and decide they have three options for survival: build habitable environments on Earth that will thrive beneath the ever-rising global ocean; build habitable environments on Earth that will survive afloat on the ever-rising global ocean; or leave Earth entirely for a new world. And, when some members (Nathan Lammockson, as you may remember from Flood) pursue the Earth-bound options, a smaller contingent begins diligent work on building a last-ditch honest to goodness spaceship, training children in physics, astronomy, and highly technical and theoretical coursework, while attempting to scan the skies for likely candidates for Earth II. The Ark has a lot working against it – predictions of the exponential water rise say the project must launch by 2041, leaving the scientists and later military less than fifteen years to not only accomplish all this building, but also to create a superluminal warp drive (a way to travel faster than the speed of light, which actually has scientific merit by the use of a “warp bubble,” or Alcubierre Drive) in order to reach a suitable distant planet in the first place. From these technical limitations, Ark follows the actual launch of Ark One, and its journey through space, and all that which befalls the humans on board – encompassing political strong-arming, a revolution, and hopes crushed and reignited.

But beyond the science and technicalities – which are wonderful, informative, and completely believable – Ark is a story about characters. Holle, who has been in the candidate program for the Ark since her childhood, a girl who has studied astrophysics since the ripe age of twelve and military survival protocol at the same time, is our main protagonist. We know Holle intimately from her time as a child and young woman on Earth; her hopes to get on the Ark, her fears that she or some of her fellow candidates might not make it, and the pain of having to leave her father behind. We also see her grow as a character, from a young hopeful idealist to a tough woman who will do what is necessary to keep the people on Ark One, and thereby humanity’s chances for survival, alive. It’s also the story of Grace, who is put on the Ark due to Lily (protagonist of Flood)’s maneuvering and manipulation. Grace too grows from a shell of a woman who cares for nothing, to a loving mother and invaluable member of the Ark crew in their many cold years in transit. Nothing is simple or cookie-cutter here; there is love and friendship, but also bitterness, backstabbing, and passion, all in a roil of human emotion that is compelling and genuine. Stuck on a spaceship for decades, with children born in transit who have never seen Earth or the sunlight who are resentful of the elders’ uncompromising command, things aboard the Ark are messy and destructive. And when they finally reach their destination, other tough decisions must be made.

I loved this book. I loved this book. I’m not exactly sure how else to say it. From the compelling characters, to the science fiction elements, to the balance of hope and despair in equal measure, I loved Ark. I loved Holle and Grace’s narrative, just as I loved the detailed and genuine secondary characters both on the Ark and back on Earth, especially the character of Kelly (ruthless, ambitious leader of the ship), Venus (astronomer and theoretician), and the broken Zane. I loved the hard science aspect, with the development of the warp bubble, the day to day life on the ship, the observations of other star systems and viable candidates for a new home. I loved the writing, the blend of physics, hard science fiction, and compelling plot lines. I loved the emotional turmoil, the self-destructive nature of humanity, and the messiness of survival.

Simply put: I loved this book.

Grace had spent most of her life on the road with Walker City, fifteen years walking with her home on her back, like a snail or a crab. The time before that, when she was younger than five years old and a pampered prisoner of her father’s family in Saudi, was a blur, unreal, as were the years she had most recently spent as another kind of prisoner on Nathan’s liner. Now here she was yet again passed from one stranger’s hands to another.

Only the walking was real, she sometimes thought. Past, future, the vast cataclysm humanity was suffering – none of it mattered if all you could actually do in the world was put one foot in front of another, day after day, kilometre after kilometre. She could just walk away now. Walk off with nothing but the clothes on her back, just as it had been with Walker City. But she had her baby growing inside her, a baby she hadn’t wanted by a ‘husband’ she loathed, but hers nonetheless. She didn’t want to manage the pregnancy on her own.

The wind from the rotors battered Grace’s face. Lily Brooke leaned out of the chopper and stared down at Grace. She mouthed what looked like, “Forgive me.” Then Thandie pulled her back into the machine, and the bird lifted smoothly.

Grace was angry with herself for showing weakness, angry at Lily for her manipulation and abandonment. She snapped, “What do you think?”

Gordo shrugged. “They left you behind to give you a shot at getting into Ark One. A Chance of a better life than any of them face now, especillay if they’re right that their boat has been sunk.”

“I’ll never see any of them again.”

“Once again I’m alone, with strangers.”

He sighed, pushed back his peaked cap, and scratched his scalp. “So are we all. The whole world is screwed up, kid. At least here we got something to do.” He looked around. The last dust from the chopper was settling now, and the homeless were pushing back to recolonise the space they had cleared, like water pooling in a dip. In a few minutes there would be no sign that a chopper had landed here at all. “Well, that’s that. Come on, let’s get you out of here.” He released her arm and set off back through the town, towards the waiting cars.

She followed, having no choice.

Additional Thoughts: Stephen Baxter is the author of a number of science fiction novels, including The Time Ships, the Hugo Nominated sequel to H.G. Wells’ classic The Time Machine. 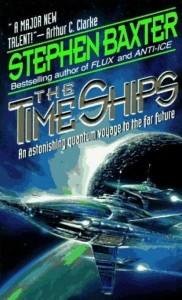 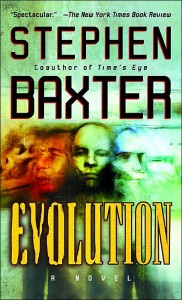 So far, I have bought this and Evolution, and plan on reading both very soon. Are there any other Stephen Baxter – or otherwise wonderful science fiction books – anyone would care to recommend?

Reading next: Triumff by Dan Abnett