Title: The Madness Underneath 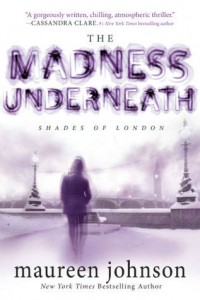 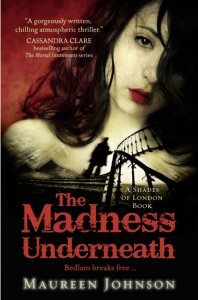 After her near-fatal run-in with the Jack the Ripper copycat, Rory Devereaux has been living in Bristol under the close watch of her parents. So when her therapist suddenly suggests she return to Wexford, Rory jumps at the chance. But Rory’s brush with the Ripper touched her more than she thought possible: she’s become a human terminus, with the power to eliminate ghosts on contact. She soon finds out that the Shades—the city’s secret ghost-fighting police—are responsible for her return. The Ripper may be gone, but now there is a string of new inexplicable deaths threatening London. Rory has evidence that the deaths are no coincidence. Something much more sinister is going on, and now she must convince the squad to listen to her before it’s too late.

In this follow-up to the Edgar Award-nominated The Name of the Star, Maureen Johnson adds another layer of spectacularly gruesome details to the streets of London that will keep you on the edge of your seat until the very end.

Stand alone or series: Book 2 in the Shades of London series

Why did we read this book: We both read and loved The Name of the Star, the first book in the Shades of London trilogy. Plus, we’re huge fans of Maureen Johnson’s! Naturally, we could not wait to get our hands on The Madness Underneath.

How did we get this book: Review copies from the publisher (US and UK)

**WARNING: this review contains inevitable spoilers for book 1 –The Name of the Star. DO NOT READ if you don’t wish to be spoiled. You have been warned!**

The Madness Underneath picks off a few weeks after the events at the end of The Name of the Star. After being attacked by the Jack the Ripper copycat, Rory has been recovering in Bristol, away from her school and her friends. The worst part of being away from London though is her isolation and inability to share with anyone the true nature of the events that took place then. Worst of all, she has been cut off from communicating with the Shades – the city’s secret ghost-fighting police – and hasn’t shared how her encounter with the Ripper has changed her forever: she is now the only ever (as far as she knows) human terminus, with the ability to vanquish ghosts on contact.

As such, when presented with the chance to go back to school she takes it. But when she arrives in London she realises that things can never be the same again and that there is something mad and evil underneath the streets of London.

The most striking aspect of The Madness Underneath is its overall seriousness.
And it shouldn’t have been any different really, considering how the main character had a close encounter with death, and how that has altered her life forever. As such, Rory’s narrative is one that comes from a place of deep trauma – even if she does not want to admit it. I am really appreciative of the way that Maureen Johnson infused the story, the narrative and Rory’s arc in this book from a PTSD perspective. Because of that, Rory does not sound, read or behave exactly like the same person from book 1 – how could she? But anything that happens here, any change in behaviour, any outrageous action, are thoroughly understandable because they come from a place of trauma, a place of coping.

Similarly, Rory’s need to not be considered a victim and to be able to regain control are deftly handled especially when combined with her newly discovered power. The way that she reacts to it, and how she feels powerful for how she can control death is both empowering but also a bit scary. It will be interesting to see how this will be developed in the next book.

One of the biggest, shiniest elements of book 1 was its mixture of humour, wit and snark with a side of outrageously fun ghost-hunting Ghostbusters-style. Although there is still wit and snark here, those fun elements were almost gone. Rory’s arc as a survivor is the most important one in this book and the one takes centre stage here. This I feel, instead of being a part of the book, was so separate from anything else that it was almost to the detriment of all other storylines in the novel – which appeared to be scattered and unfocused. From the new attacks and murders that appear connected to the Ripper’s death as well as a new set of villains and dangers, those were almost underdeveloped and randomly deployed in the story. However, everything that happened here COULD be potentially connected to the very same storyline but that is left still to be seen.

At the end of the day, The Madness Underneath is a Proper Middle of Trilogy Book – it is deeper, more thoughtful, darker than its predecessor and with a twisted ending where SHIT hits the fan bit time (also: kissing) but it is not as tight a book as it could have been. It is maybe too short and brief, too scattered for that. I still really enjoyed it and am definitely on board for book 3.

I have to agree with Ana on all counts – The Madness Underneath is a good book and a darker text than its predecessor (as it should be, given the traumatic events of book 1), but it suffers from a disconnected plot and Middle Book Syndrome.

On the positive side, I loved the careful detail that Marueen Johnson pays to heroine Rory as she grapples with the enormity of everything that has happened to her over the past few months. An American teenager that has moved from public school in Louisiana to a private, competitive boarding school (Wexford) in London for her senior year, Rory faced some pretty hardcore culture shock – add to that the Jack the Ripper copycat murders around her school, and you’ve got a pretty stressful situation. Did I mention the part where Rory nearly dies choking on a piece of food early in her Wexford career and develops the ability to see and talk to dead people? And the fact that the Jack the Ripper killer is also a ghost who has it out for Rory, thanks to her ability to see him? Yeah, that happened. At the end of The Name of the Star, Rory has been brutally attacked by the Ripper killer (who, in life, was a ghost-hunting cop like Rory’s new friends) but lives through the ordeal and in the process has become a real-life terminus – that is, she can make ghosts disappear forever with a single touch.

Naturally, this type of trauma leaves a mark, physically and emotionally, and the Rory of The Madness Underneath is a different young woman than the one we got to know in The Name of the Star. She’s still loveable, quirky, talks-when-she’s-nervous Rory, but she’s also lived through an incredibly harrowing ordeal and has been changed by the experience. As Ana says, Rory’s struggles with post-traumatic stress are beautifully, painfully detailed in this book, and I think her characterization and arc through this second novel is the strongest thing about the book.

On the negative side, however, the actual plot of this novel is scattered and far less powerful than that of the prior book. While The Name of the Star was a honed, tightly plotted paranormal thriller with a clear murder mystery underlying the text (in addition to and working alongside Rory’s personal journey as a character), The Madness Underneath treats the paranormal elements and mystery as more of a backburner/throwaway feature. This wouldn’t be a bad thing, except that the book goes into crazy-what-is-happening mode and crams in a ton of action and plot twists in the last 30-40 pages (which is completely out of sync with the rest of the book). The connections made between Rory’s abilities and a new couple of murders, the history of Wexford, and a cult (yes there’s a cult) are tenuous at best. And there’s a huge WTF moment at the end of the book that also comes out of nowhere and feels…well, gratuitous, and in there purely for twisty cliffhanger shock-value.

I still enjoyed The Madness Underneath, but felt that it lacked the polish of the first book, and definitely suffered from intense middle-book syndrome. I’ll be back for book 3, though, most definitely.

Reading Next: When We Wake by Karen Healey

We have ONE copy of The Madness Underneath up for grabs, courtesy of the US publisher! The contest is open to addresses in the US only, and will run until Sunday March 10 at 12:01am EST. To enter, use the form below. Good luck!