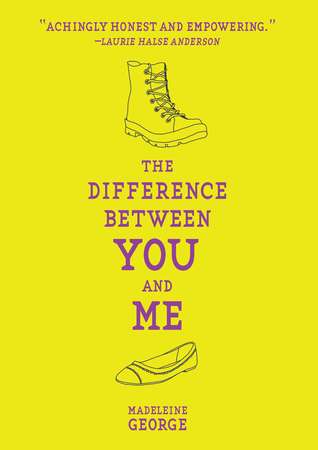 Title: The Difference Between You and Me

Jesse cuts her own hair with a Swiss Army knife. She wears big green fisherman’s boots. She’s the founding (and only) member of NOLAW, the National Organization to Liberate All Weirdos. Emily wears sweaters with faux pearl buttons. She’s vice president of the student council. She has a boyfriend.

These two girls have nothing in common, except the passionate “private time” they share every Tuesday afternoon. Jesse wishes their relationship could be out in the open, but Emily feels she has too much to lose. When they find themselves on opposite sides of a heated school conflict, they each have to decide what’s more important: what you believe in, or the one you love?

Why did I read this book: I’ve been looking for stories featuring politics and social activism and this book came highly recommended to me.

It all started with Les Miserables. After watching the most recent adaptation of the musical, I felt I needed to learn more about the subplot involving Marius and his friends and thus proceeded to read about the student-led Paris Uprising of 1832.

From there, I started to think about student-led rebellions and revolts in general and the year 1968 and its many students protests all around the world in particular.

Then, I thought of how I read a lot of Young Adult novels and started to think about politics in YA and how Contemporary YA is a sub-genre full of students who could be all CHANGE THE WORLD, but how little of it seems to deal with politics at all – both in a wider philosophical context (everything is politics) and a narrow definition (actual social activism, political engagement, etc). That seemed weird to me, considering how current affairs make for great topics to be passionate about. I thought: maybe I am not reading the right things or paying enough attention. So I took it to Twitter (as one does), asking for recommendations for YA books with political plots and got quite a few recommendations and loads of shout outs for The Difference Between You and Me.

So here we are.

The Difference Between You and Me is exactly what I had in mind when I set out to ask for those recommendations and it is a prime example of how YA can delve in politics in complex, meaningful ways.

The Difference Between You and Me is a book that explores political engagement in a variety of ways, both in the personal and public spheres. It’s a story with a dual narrative format with chapters more or less alternating between two girls: Jesse’s third person-present tense narrative and Emily’s first person narrative.

Jesse and Emily are in love with each other and have a passionate, lustful relationship, meeting once every week in secret. It’s a very complicated relationship though: Jesse is out and proud and founding (and only) member of NOLAW, the National Organization to Liberate All Weirdos. Emily is a closeted bi who feels she has much to lose if she comes out including her steady boyfriend and her position as vice-president of the student council.

Jesse becomes more and more involved in social activism and participates in a protest against a Wall-Mart type big corporation that is threatening local shops. This happens just as Emily starts to work for said corporation hoping to engage their help with school activities and thus, they find each other on opposite sides.

The two girls could not be more different – title reference! – but I thought really interesting the way that the story showed their differences as a complicated, complex thing rather than a dichotomous bad x good dynamics.

In a way both girls are very similar – they are both awesomely ambitious and interested in activism and they go after what they believe in.

Their differences lie in their motivations and their approach: there is the manner in which Emily goes about getting things done – her approach might not necessarily the best one in terms of how she does things (more or less in secrecy) and her motivation coloured by personal ambition which she hopes could eventually helps others. Jess is loud and passionate about equality and interested in public engagement of her ideas. She makes friends with Esther, a social activist who introduces her to a group of protesters widening the ways she can find political engagement.

On the other hand, Jesse’s best friend Wyatt is not interested in politics at all – but his choice of being home-schooled, his choices of clothes are also a statement of his beliefs.

My point here is to show how the book explores the idea that there are different ways to engage with politics, social activism and that things are …complicated and not black and white.

I loved most characters (even the ones who were slighted less developed like Wyatt) but Emily’s narrative is the one that interested me the most here. As a closeted bi she is obviously not a good match for out-and-proud Jesse and the way the story develops shows this very firmly even as it portrays their angst over how despite everything, they desire each other so much (and the making out here is awesomely graphic and hot) .

Emily’s narrative also clearly shows someone who is unaware of others and who is lying to herself all the time and I felt nothing but sympathy for her. There is one quote I’d like to include that is indication of her frame of mind:

I have one friend who has a small hand from birth and one other friend who’s a Muslim – she wears a head scarf and everything. At some schools those people might get teased or made to feel unwelcome, but at our school those kids are as welcome as any normal kids.

She thoroughly believes that her school is inclusive and that there is nothing wrong about her being bi but she internally frames all of it from a normal x abnormal perspective and that’s the key to Emily’s character. This is a girl who is earnest and genuinely caring but at the same time so completely clueless and unaware of others that her narrative is almost painful to read especially when juxtaposed to Jesse’s more empathic outlook.

I obviously have a very positive interpretation of Emily’s character and the way the story portrays their differences, and I saw her character as a very young queer who has a long way to go – and that is ok. I loved how the narrative does this in a way that shows that Emily’s choice is a valid choice for her and that not everybody feels safe or comfortable about coming out nor should they be expected to. I did not read Emily as the villain of the piece even though at times in comparison I felt the story set Jesse up as the main heroine – but this is definitely open for interpretation.

There are though, significant flaws here. Some characters are very stereotypical and one-sided. There are two random chapters from Esther’s point of view that felt unnecessary. And even though I thought the writing was competent and realistic from a perspective of writing teens, the dialogue would at times, veer suddenly into teen-speak with a vengeance and it was rather off-putting:

I guess the thing we’re working on, “ she says, “was, like, trying to convince student council that we need to divest from StartMart. Like, we shouldn’t take their money and use it for school functions.” Mike has assumed a doglike listening posture, leaning in with his ear turned slightly in Jesse’s direction to catch her words. He nods eagerly. “So, like, if you know anyone on student council you could start there. Tell them you don’t want StarMart in our school. That’s one thing you can do. If you know someone.”

Mike swallows uncomfortably. “I do, actually,” he says, “but it’s kind of like, really complicated? I can’t actually be public about this? Like, I really want to help, but I can’t help in school.”

There is a balance to be struck between vying for authenticity and simply being annoying – this book walked a very fine line and sometimes that line was crossed.

That said, I actually loved it and how it is all about social activism and the heartfelt relationship between these two great girls. And if you think of any other stories like this one? Please do share your recommendations.

“Anyway, if you need your heroes to be perfect, you won’t have very many. Even Superman had his Kryptonite. I’d rather have my heroes be more like me: trying to do the right thing, sometimes messing up. Making mistakes. Saying you’re sorry. And forgiving other people when they mess up, too.”

Reading Next: Emilie and the Hollow World by Martha Wells