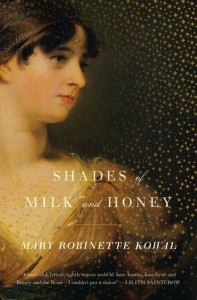 Title: Shades of Milk and Honey

Shades of Milk and Honey is exactly what we could expect from Jane Austen if she had been a fantasy writer: Pride and Prejudice meets Jonathan Strange & Mr. Norrell. It is an intimate portrait of a woman, Jane, and her quest for love in a world where the manipulation of glamour is considered an essential skill for a lady of quality.

Jane and her sister Melody vie for the attentions of eligible men, and while Jane’s skill with glamour is remarkable, it is her sister who is fair of face. When Jane realizes that one of Melody’s suitors is set on taking advantage of her sister for the sake of her dowry, she pushes her skills to the limit of what her body can withstand in order to set things right—and, in the process, accidentally wanders into a love story of her own.

Why did I read this book: I was in the mood for a light romantic fantasy in a regency setting, and couldn’t think of any better suited book than Ms. Kowal’s Shades of Milk and Honey. Also on a more superficial level, the book’s packaging – a facet of publishing that never gets enough attention – is lovely, as publisher Tor is wont to do (and sometimes I am suckered in by a pretty cover/font/page style).

It is a truth universally acknowledged that attempting to emulate Jane Austen’s verve and wit is no easy task. In Mary Robinette Kowal’s debut novel, Shades of Milk and Honey, Austen’s England is blended with a dash of fantasy and glamour, making for a frothy read as enticing (and light on substance) as its title. Jane Ellsworth is twenty-eight and plain with an over-long nose and sallow complexion, but possesses an infallible sense of propriety, manners, and skill in the womanly art of wielding folds of magic, or glamour. But while Jane has the talent and wit of the family, her younger sibling Melody has beauty and charm in spades and the sisters’ relationship becomes strained when they vie for the attentions of eligible men – especially for one Mr. Dunkirk, a gentleman that both Jane and Melody hold in the highest regard. Mr. Ellsworth, the girls’ doting if eccentric father, worries that his daughters will have no protection should he die, and dearly wishes that the two would find husbands – and to provide them with some sense of security, he has set aside a sensible dowry for both of his girls. The season brings more amiable and eligible young men to the Ellsworth’s social circles, much to the delight of Melody and her scheming mama, but Jane finds herself far more interested in the surly artist, Mr. Vincent, that has been commissioned to create a most elegant glamour for the Countess’s dining hall.

As Jane struggles to conceal her feelings for Mr. Dunkirk and her fascination with the magical artistry of Mr. Vincent, she also finds herself ensnared in a web of secret engagements and deceit – and when she discovers that Melody herself is in grave danger of ruining her prospects, Jane must use her wits and magical abilities to save her family and friends before it is too late.

As the synopsis asserts, Shades of Milk and Honey is absolutely Jane Austenesque with just a smidgen of magic. Ms. Kowal’s novel draws *heavily* from Pride and Prejudice (preoccupied fathers and nervous mamas, balls, elopements with a rakish redcoat, a gentleman’s overprotected younger sister, prideful exchanges, misunderstandings), Sense and Sensibility (again with a rakish Willoughby type of gentleman after a handsome dowry, sprained ankles, a sense governed elder sister juxtaposed against a passionate and selfish younger sister), Emma (secret engagements again, strawberry picnics, the restorative importance of Bath)…well, you get the picture. Like most readers, I love Jane Austen, and so I am always wary of authors that attempt to emulate her style. Jane Austen is is so beloved because of her singular wit, vibrant heroines (and equally deserving heroes), and her magical ability to weave some of the most memorable romances in literature. Understandably, most attempts to ape Austen usually end up being terribly, horribly bad. In the case of Shades of Milk and Honey Mary Robinette Kowal manages to adroitly duplicate Jane Austen’s style (down to certain spellings, e.g. “shew”) and levity, creating a pleasant, quick read.

Easily, the strongest aspect of Shades of Milk and Honey is Ms. Kowal’s imagination of glamour as purely decorative magic for the upper classes. The descriptions of “folds” and their manipulation, their taxation on those that pull them from the ether, and the frivolity of these displays (though they clearly could have serious militarized applications) are fascinating, and seamlessly integrated into the Regency setting. As with painting or playing the pianoforte, a young woman’s skill with glamour is yet another fine art that must be mastered if one is to call herself truly accomplished.

However, while Ms. Kowal’s writing may have done justice to the form of Austen’s prose, and features an imaginative magical system, Shades of Milk and Honey unfortunately lacked the strong characters and the sweeping romance of an Austen novel. This isn’t to say that the book is bad – it’s entertaining and frivolous and escapist, and one can easily devour the slim volume in a single sitting. But what Shades of Milk and Honey lacks is the heart and soul of any of the books that it borrows from. As a heroine, Jane is a mashup of Anne Elliot, Elinor Dashwood, and Elizabeth Bennet, but somehow lacking in appeal compared to any of these three characters – too introverted and lacking self-esteem to be as feisty as Elizabeth, too wishywashy and vain to be Anne or Elinor. Jane is a decent, sympathetic heroine, as she struggles with her younger sister, her own lack of prospects and secrets, but also mildly irritating. Melody, the beautiful but vain and empty-headed younger sister is much more so. As for the men in the sisters’ lives, don’t even get me started. Suffice to say that neither Mr. Dunkirk nor Mr. Vincent hold a candle to Fitzwilliam Darcy (although Captain Livingston is an aptly villainous Wickham). Of course, Shades of Milk and Honey‘s most egregious offense is its complete lack of romance – for all that this is fashioned off Jane Austen’s works, the love story element is halfhearted and not at all convincing.

That said, though the book lacked in comparison to its source material I still enjoyed Shades of Milk and Honey. I am more interested to see how Ms. Kowal’s writing will develop outside of the long shadow of Jane Austen, and am eager to see what she comes up with next.

The Ellsworths of Long Parkmead had the regard of their neighbours in every respect. The Honourable Charles Ellsworth, though a second son, through the generosity of his father had been entrusted with an estate in the neighbourhood of Dorchester. It was well appointed and used only enough glamour to enhance its natural grace, without overlaying so much illusion as to be tasteless. His only regret, for the estate was a fine one, was that it was entailed, and as he had only two daughters, his elder brother’s son stood next in line to inherit it. Knowing that, he took pains to set aside some of his income each annum for the provision of his daughters. The sum was not so large as he wished it might be, but he hoped it would prove enough to attract appropriate husbands for his daughters. Of his younger daughter, Melody, he had no concerns, for she had a face made for fortune. His older daughter, Jane, made up for her deficit of beauty with rare taste and talent in the womanly arts. Her skill with glamour, music, and painting was surpassed by none in their neighbourhood and together lent their home the appearance of wealth far beyond their means. But he knew well how fickle young men’s hearts were. His own wife, while young, had seemed all that was desirable, but as her beauty faded she had become a fretting invalid. He still cherished her from habit, but often he wished that she had somewhat more sense.

And so, Jane was his chief concern, and he was determined to see her settled before his passing. Surely some young man would see past her sallow complexion and flat hair of unappealing mousey brown. Her nose was overlong, though he fancied that in certain lights it served as an outward sign of her strength of character. Mr. Ellsworth fingered his own nose, wishing that he had something more to bequeath to Jane than such an appendage.

Additional Thoughts: Shades of Milk and Honey has an interesting trailer:

Reading Next: The Water Wars by Cameron Stracher

Book Review: And Then He Kissed Her

Over at Kirkus: The Clockwork Scarab by Colleen Gleason