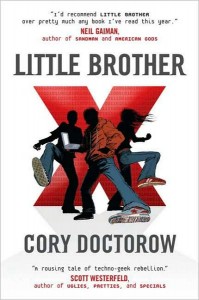 Why did I read this book: The impressive author blurbs (Neil Gaiman’s review in particular) and summary had me interested in Little Brother since its debut last year. I was kinda hesitant to splurge on the hardcover, but thanks to my borders gift cards (combined with those wonderful email coupons), I finally was able to pick this book up.

Summary:Marcus, a.k.a “w1n5t0n,” is only seventeen years old, but he figures he already knows how the system works–and how to work the system. Smart, fast, and wise to the ways of the networked world, he has no trouble outwitting his high school’s intrusive but clumsy surveillance systems.

But his whole world changes when he and his friends find themselves caught in the aftermath of a major terrorist attack on San Francisco. In the wrong place at the wrong time, Marcus and his crew are apprehended by the Department of Homeland Security and whisked away to a secret prison where they’re mercilessly interrogated for days.

When the DHS finally releases them, Marcus discovers that his city has become a police state where every citizen is treated like a potential terrorist. He knows that no one will believe his story, which leaves him only one option: to take down the DHS himself.

Marcus, aka w1n5t0n, aka m1k3y, is a precocious seventeen year-old hacker in San Francisco. Beating school security cameras, he and his “team” sneak off-campus to get a headstart on Harajuku Fun Madness–a competitive alternate reality game that involves real-world and virtual puzzle solving. Unfortunately for Marcus and his friends, they end up caught in the middle of a devastating terrorist attack as the Oakland Bridge is obliterated. In the wrong place, at the wrong time, the high school kids are scooped up and imprisoned by noneother than the Department of Homeland Security (the “DHS”) and thrown into a secret prison off shore. The DHS interrogates and tortures Marcus, claiming that his encrypted computer and phone and placement at the scene of the attack make him guilty so far as they are concerned. After thoroughly humiliating Marcus, taking all his passwords and under threat of being locked away for life without trial, DHS releases Marcus and his friends–less Marcus’s best friend Daryl. They return home to find San Francisco has been turned into a police state, with the DHS at every corner, interrogating people and making others disappear at will. Scared but angry, Marcus decides to fight back against Big Brother, one xbox at a time.

This book is like Hackers (you know, the movie with Angelina Jolie that totally made you want to pick out a cool screen name like “Acid Burn” or “Crash Override” and wear colorful layers of kimono cut spandex while sporting a funky hairdo and purple lipstick. On rollerblades. HACK THE PLANET! HACK THE PLANET!), only Little Brother actually has the technological chops to back it up. This was a fascinating read. I mean that–FASCINATING. I know my way around hooking up sound systems and basic html, but Little Brother completely knocked me on my ass. The sheer amount of information packed into this book alone is staggering! How to beat computer bugs, gait-cameras, create a paranoidXbox, access and scramble personal data…it’s all covered in Doctorow’s dissection of virtual un-security.

Little Brother actually has three schizophrenic personalities. There’s the sheer amount of technological information and know-how; there’s the pseudo-political message/critique of privacy and rights; and lastly there’s the actual, you know, story. While I found Little Brother to be an immensely fascinating read, it’s not so much a novel as it is a vehicle for projecting the cool techno-savvy, and the BIG NEON FLASHING LIGHTS! political message. The character development and general storyline comes in a way distant third. It’s kinda like reading Ayn Rand–but Cory Doctorow is infinitely more readable (not to mention his message of Security versus Personal Liberty is far easier to swallow than Rand’s poorly written 80+ page diatribes). That’s not to say that the story isn’t interesting–the book begins with a bang and establishes Marcus and his friends as likable, very smart teens. The bombing of the Oakland Bridge then Marcus’ time in Gitmo-by-the-bay is a harrowing, gripping opening. Throughout the novel (in between spouting political ideals and his infinite amount of technological genius) there are flashes when Marcus does become a believable seventeen year-old boy again–in his growing relationship with Ange, his fears for his friends, and his past as a LARP-er in particular. These moments, however, are few and far between. For the most part, characters in this book are flat as paint.

The real meat and potatoes of the book, Doctorow’s thesis if you will, lies in the question of Security versus Individual Liberty. With his technological prowess, Doctorow (I say Doctorow because I get the feeling it’s really him speaking, not Marcus) unveils how easy it is for The Government to monitor all our actions, under the illusion of “National Security”. Then, he rips the illusion of security to shreds, creating a seventeen year old character who can outwit DHS armed with linux and an xbox with a wireless hookup–and Doctorow gives detailed instructions of how everything is done. The coup de grace is the political message: sacrificing Individual Liberty in the name of Security is morally wrong…especially since Security is nothing more than an illusion. It’s a very timely message, an extrapolation on the aftermath of 9/11 and the Patriot Act. While I agree with the message itself (like the setting of the novel, I am from California after all!), I can’t help but notice its heavy-handedness. At least four times in the novel, Marcus quotes the same snippet of the Declaration of Independence. For example:

“I wanted to read something,” I said. “It’s short. ‘Governments are instituted among men, deriving their just powers from the consent of the governed, that whenever any form of government becomes destructive of these ends, it is the right of the people to alter or abolish it, and to institute new government, laying its foundation on such principles, and organizing its powers in such form, as to them shall seem most likely to effect their safety and happiness.'”

Ms. Galvez’s smile was wide…”Why did you read that to us, Marcus?”

“Because it seems to me that the founders of this country said that governments should only last for so long as we believe that they’re working for us, and if we stop believing in them, we should overthrow them.”

The snippet becomes Marcus’s catch phrase (you know, his “Live together, die alone”)…and it gets extremely irritating after a while. Not because of the underlying sentiment, but because of the poor writing. Regardless of affiliation or one’s position on Doctorow’s political argument, the fact is, it’s extremely over the top. There’s no subtlety to this novel (ironic, since it’s a book about subversion). I don’t care what end of the spectrum the political message is from–so long as its written well and believably into the story (not as a talking point for the author). Granted, I’m much more charitable to Doctorow since his politics align with my own…but as a reviewer, I can see how this might be unpalatable to some readers.

Despite my sizable gripes with Little Brother, I still found myself wonderfully entertained and I burned through this book in two days. I’d recommend everyone read it for the information about internet security alone! And to be fair, the actual plot is entertaining in itself. It’s a fast paced techno-thriller and an empowering tale, albeit a little too fairy tale to be true. At the end of the day, I was entertained AND schooled by Little Brother, and would certainly recommend it despite its shortcomings as a work of fiction.

Notable Quotes/Parts: How it all started:

Somewhere in my closet was a shrink-wrapped box containing one still-sealed, mint-in-package Xbox Universal. Every Xbox has been sold way below cost–Microsoft makes most of its money vharging games companies money for the right to put out Xbox games–but the Universal was the first box that Microsoft decided to give away entirely free.

Last Christmas season, there’d been poor losers on every corner dressed as warriors from the Halo series, handing out bags of these game machines as fast as they could. I guess it worked–everyone says they sold a whole butt-load of games. Naturally, there were countermeasures to make sure you only played games from companies that had bought licenses from Microsoft to make them.

Hackers blow through those countermeasures. The Xbox was cracked by a kid from MIT who wrote a best-selling book about it, and then the 360 went down, and then the short-lived Xbox Portable (which we all called the “luggable”–it weighted three pounds!) succumbed. The Universal was supposed to be totally bulletproof. The high school kids who broke it were Brazilian Linux hackers who lived in a favela–a kind of squatter’s slum.

Never under estimate the determination of a kid who is time-rich and cash-poor.

Once the Brazilians published their crack, we all went nuts on it. Soon there were dozens of alternate operating systems for the Xbox Universal. My favorite was ParanoidXbox, a flavor of the ParanoidLinux. ParanoidLinux is an operating system that assumes that its operator is under assault from the government (it was intended for use by Chinese and Syrian dissidents), and it does everything it can to keep your communications and documents a secret. It even throws up a bunch of “chaff” communications that are supposed to disguise the fact that you’re doing anything covert. So while you’re receiving a political message one character at a time, ParanoidLinux is pretending to surf the web and fill in questionnaires and flirt in chat rooms. Meanwhile, one in every five hundred characters you receive is a real message, a needle buried in a huge haystack…The best part of all this is how it made me feel: in control. My technology was working for me, serving me, protecting me. It wasn’t spying on me. This is why I loved technology: if you used it right, it could give you power and privacy.

Additional Thoughts: As I mentioned before, Little Brother totally makes me want to watch Hackers again. Man, I loved that movie–ridiculous as it may be, it was still wonderful, cheesy, delicious fun. Here’s the trailer:

Verdict: A highly educational, entertaining and, frankly, scary book. While Little Brother isn’t the best story it’s still a fascinating read, and worth taking a look at. Recommended.

Reading Next: Undone by Rachel Caine