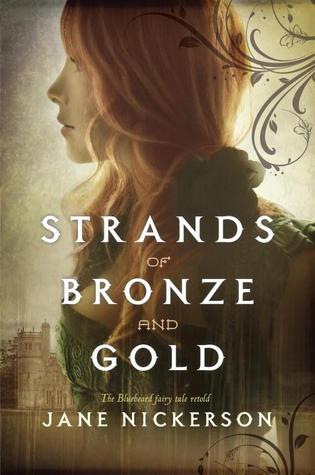 Title: Strands of Bronze and Gold

Seventeen-year-old Sophia Petheram has been sheltered by her doting family all her life, until the day her father dies. It’s 1855, and with no money and few options, she goes to live with her guardian, the mysterious Bernard de Cressac, at the astonishingly lavish Wyndriven Abbey in Mississippi.

Sophie has always longed for a comfortable life, and she finds herself both attracted to and shocked by the charm and easy manners of her overgenerous guardian. But as she begins to piece together the mystery of his past, it’s as if thread by thread, a silken net is woven around her. And when she begins glimpsing the ghosts of his former wives (all with hair as red as her own) in the forgotten corners and dark hallways of the Abbey, Sophie knows she’s in de Cressac’s trap.

With enchanting romance, chilling suspense, and dashes of the supernatural,Strands of Bronze and Gold is a compulsively readable debut.

Stand alone or series: It is supposedly first in a series but this book is self-contained and can be read as stand alone

Why did I read this book: This is a Gothic Bluebeard retelling set in pre-Civil War USA – how could we NOT want to read this?

(This was supposed to be a joint review but Thea refused to finish the book. Yes. It is that bad.)

After the death of her father, Northern Sophie Petheram receives an invitation to go live with her godfather, the mysterious Monsieur Bernard de Cressac, in his plantation in Mississippi. Sophie has always longed for a more comfortable life and for spending more time with her godfather – whom she has always admired in a secretive, furtive way – and is at first, elated at the prospect. And to begin with, all goes well. Her godfather is charming and attentive (as well as extremely attractive), regaling her with his stories of the Exotic Orient and her surroundings are luxurious and decadent.

But soon she starts to realise that this new life is not perfect. Her guardian allows her very little freedom and is prone to dangerous, violent mood swings. She is also not really comfortable with the way he treats his slaves or that he even has slaves at all. Then Sophie learns of his past wives – all of whom have died tragically, all of whom have bronze hair as her own – and realises that something much more horrific is afoot and that her own life might be in danger.

Strands of Bronze and Gold is a gothic retelling of the Bluebeard fairy tale transported to a pre- Civil War America. I was really intrigued about this from the get go and for its possibilities. Bluebeard is a fairytale that is extremely misogynist and sexist – one its motifs is the question of the “danger” of female curiosity, a question that fits into victim-blaming. It is also a fairytale with strong European roots.

As such, when reading this, I wanted to be able to see the issue of sexism addressed and to understand the author’s choice of moving this to Mississippi pre- Civil War. This is not a setting that can be taken lightly and above all, I wanted to see how the author dealt with the issue of slavery in this setting.

Unfortunately all of it was hugely disappointing.

Strands of Bronze and Gold has an unhurried developed story that fits not only with the gothic atmosphere of danger and mystery but also with the issue of Sophie’s slow transformation from extremely naïve and trusting to a strong-willed heroine who knows how to deal with her godfather’s mood swings strategically. This is a really interesting transformation in terms of how it addresses how Sophie – in a context of supposed powerlessness – can think strategically and empower herself by doing so. So, in a way, the topic of sexism is somewhat addressed here and I appreciated how Sophie was able to save herself in the end. The topic of female curiously being at fault for the wives’ fate is also removed here: Monsieur Bernard de Cressac is a dangerous psychopath and wholly to blame for the happenings in the book.

That said Sophie’s transformation is not really developed that well. For a story that is so slowly developed, the actual character’s arc happens suddenly and with awkward transitions. That is all the more clear when Sophie falls in love at first sight with another man – one minute they meet, the next they are in love.

Although I appreciated the attempt at portraying Sophie’s story as one of self-empowerment, I wasn’t wholly convinced by how this happened.

My main issue with the book though is the pre Civil-War Mississippi plantation setting and how this was incorporated into the story. This was bad; this was really, REALLY BAD. The book is populated with a series of POC characters, some of them house slaves, some of them cotton field ones and there is one freed slave as well. The problem is, these characters are not characters on their own and are there in relation to the white characters. Sophie for example is the Good Abolitionist, who wants to help the slaves. As such she sympathises, pities them and wants to help them. Which: fair enough. But she is so completely clueless about her privilege it is not even funny. At one point she sees slaves labouring in the cotton fields and pities them for their shabby clothes. She sees a pair of slaves who are in love and cannot get married and pities HERSELF for not having a love of her own. Priorities: she has them (not). And this could have served as an astute observation about Sophie’s naivety, except this is not questioned and only serves to illustrate Sophie’s forward-thinking and goodness. The same way that the ill treatment of the slaves serves only to illustrate the villain’s villainy.

I am not kidding, there is EVEN a Magical Negro: a freed slave who lives in the woods and who is happy, wise and helps Sophie in feeling less lonely.

There is also definitely a strand of White-Saviour approach by showing the work of Good White People helping with the Underground Railroad (but without mentioning the important work and support from freed, escaped slaves in the same).

And before anyone says something about how this is a historical novel and that the portrayal of Sophie and of slavery is historically accurate, allow me to reinforce the fact that there is a HUGE difference between writing a historically accurate character (whatever that might mean) and writing a story that does not challenge/question these views in the narrative itself. In that sense, Strands of Bronze and Gold is not doing anyone a service by portraying slavery as a Bad Thing from the point of view White Saviours and by portraying POC characters as offensive stereotypes.

This is all very problematic to say the least and tainted the whole book for me. I can not in good conscience recommend this book at all – in fact, I recommend you to stay far, far away from it.

Reading Next: Tooth and Claw by Jo Walton

Over at Kirkus: Daughter of the Sword by Steve Bein