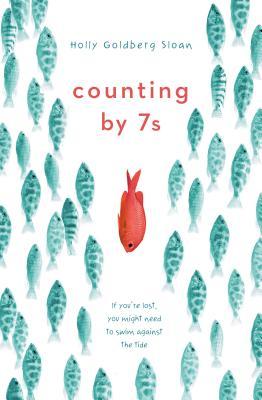 In the tradition of Out of My Mind, Wonder, and Mockingbird, this is an intensely moving middle grade novel about being an outsider, coping with loss, and discovering the true meaning of family.

Willow Chance is a twelve-year-old genius, obsessed with nature and diagnosing medical conditions, who finds it comforting to count by 7s. It has never been easy for her to connect with anyone other than her adoptive parents, but that hasn’t kept her from leading a quietly happy life . . . until now.

Suddenly Willow’s world is tragically changed when her parents both die in a car crash, leaving her alone in a baffling world. The triumph of this book is that it is not a tragedy. This extraordinarily odd, but extraordinarily endearing, girl manages to push through her grief. Her journey to find a fascinatingly diverse and fully believable surrogate family is a joy and a revelation to read.

How did I get this book: Review Copy from the publishers – from BEA

Why did I read this book: I’ve heard nothing but good things about Holly Goldberg Sloan’s debut I’ll Be There. Then whilst at BEA, I saw the Middle Grade buzz panel which featured this book and it sounded wonderful.

It is difficult to pinpoint the exact moment when I fell out of love with Counting by 7s but it happened slowly yet inexorably in the hours after I finished reading it.

On the surface, this is an innocuous book, full of good intentions: it is a book featuring different stories about diverse PoC characters (including its protagonist). It is also a beautiful story about different kinds of families, about deep connections that can be formed between people from different walks of life and above all, it is about surviving adversity. It is a touching story that made me laugh and that made me cry. But it also made me ponder and question its main message.

Counting by 7s’ main character is Willow Chance, a little girl who has lost two sets of parents in her short life – she never knew her blood parents and her adoptive ones die in a terrible accident. She is all alone in the world apart from Dell, a school counsellor whose therapy methods are completely unprofessional; and from a couple of new friends she has met recently. Those friends are the siblings Mai and Quang-ha (who is also seeing Dell for his disruptive behaviour) who end up convincing their mother Pattie to take care of Willow temporarily.

Willow is a special person: she is a 12-year-old genius, obsessed with nature and with diagnosing medical conditions and who has found it difficult to deal and connect to people until this tragedy has forced her to.

The story is centred on Willow’s specialness – despite her oddness she is extremely endearing and moves everybody around her that they all end up changing their lives for the better. It is a touching story that made me laugh and that made me cry. But it also made me ponder and question its main message.

It is not for nothing that the official blurb compares it to Wonder by R J Palacio: it has a similar motif, a similar structure (head-jumping) and it provoked a similar reaction on me.

I had three main problems with the novel: Dell’s counselling theories that go basically unchallenged; the novel’s ending; and its strange relationship with money.

Dell – Dell is a terrible counsellor who doesn’t really know what he is doing and who often tries to exploit the system, who at first tried to exploit Willow’s knowledge for his own gain and who has a way of labelling his patients in an extremely problematic way. For some reason, schools sent him their worst cases and he does absolutely nothing to help them. In fairness, Dell is NOT supposed to be a good counsellor but he is shown in a fairly sympathetic light that is also supposed to be endearing and funny. Willow calls him out on the way that he labels the kids he sees but this is as far as the narrative goes on really challenging his role – in the end, he is shown as having grown and changed but no word is said about the kids whose lives he has affected negatively and who he was supposed to have helped. That his therapy method worked for Willow (because of her specialness) does not mean anything in a wider context but is everything that the novel is worried about.

The ending: in the end, Pattie ends up adopting Willow. Now, up until the very ending of the novel, Pattie was shown as a resourceful, intelligent, caring woman who loves her kids and who cares for Willow deeply. She is also someone who struggles to make ends meet, who runs her own small business but who still has financial problems. Her and her two kids live in a one room garage with no bathroom or kitchen. She shares a bed with her daughter. It is hinted that their living conditions is one of the main reasons why her son is having behaviour issues. They are presented as extremely poor which only makes their attempt to help Willow all the more heart-warming.

Then in the end it is revealed that Pattie is actually RICH, that she has been saving money all this time and has enough to buy an ENTIRE APARTMENT BUILDING. This is grating and confusing within the context of the novel because the Pattie that was presented to the reader throughout the novel is not someone who would impose such hardships (living in a garage!) on her own children for NO GOOD REASON. That she’d only reveal her money after her love for ULTRA SPECIAL Willow and not her own children serves only to reinforce Willow’s specialness.

Which brings me to my last point.

The Money issue: one of the main topics of the novel is the question of poverty and how it affects peoples’ lives. Surviving adversity despite poverty is one of the main drives of the novel and one of the connecting points between characters. In the end, the revelation that Pattie had tons of money all along and all of their money problems are magically solved undermines the topic of dealing with poverty. Plus, ANOTHER CHARACTER ALSO WINS THE LOTTERY BY THE WAY. He turns out to be the guy who is going to be the little girl’s adoptive father.

The book is so focused on Willow’s specialness that it forgets the rest of the world (like the other kids with equally real problems that Dell is supposed to be helping), backtracks on the portrayal of the rest of their characters and detracts from a powerful storyline about poverty to shower money on just about everybody.

I think it is that type of book that tries so hard to be about GOOD PEOPLE and it’s so well intentioned that I feel like a jerk for writing this review. In a way it is just like those “feel good movies of the year” that so often have problematic underlying messages that almost escapes your attention because you are injected with such a huge dose of happy-inducing saccharine storylines. But when you come down from that high, you hit rock bottom fast and furious.

A genius shoots at something no
one else can see, and hits it.

We sit together outside the Fosters Freeze at a sea-green, metal picnic table.

All four of us.

We eat soft ice cream, which has been plunged into a vat of liquid chocolate (that then hardens into a crispy shell).

I don’t tell anyone that what makes this work is wax. Or to be more accurate: edible, food-grade paraffin wax.

As the chocolate cools, it holds the vanilla goodness prisoner.

Our job is to set it free.

Ordinarily, I don’t even eat ice-cream cones. And if I do, I obsess in such a precise way as to prevent even a drop of disorder.

I’m in a public place.

I’m not even spying.

And my ice-cream cone is a big, drippy mess.

I’m right now someone that other people might find interesting to observe.

Well first of all, I’m speaking Vietnamese, which is not my “native tongue.”

I really like that expression because in general, I think people don’t give this contracting muscle credit for how much work it does.

So thank you, tongue.

Rating: I have no idea how to rate this. I loved it as a I read it, disliked it afterwards.