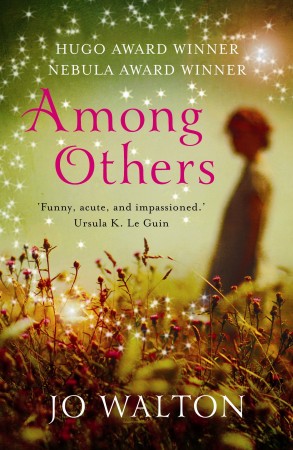 Startling, unusual, and yet irresistably readable, Among Others is at once the compelling story of a young woman struggling to escape a troubled childhood, a brilliant diary of first encounters with the great novels of modern fantasy and SF, and a spellbinding tale of escape from ancient enchantment.
‘It doesn’t matter. I have books, new books, and I can bear anything as long as there are books.’
Fifteen-year-old Morwenna lives in Wales with her twin sister and a mother who spins dark magic for ill. One day, Mori and her mother fight a powerful, magical battle that kills her sister and leaves Mori crippled. Devastated, Mori flees to her long-lost father in England. Adrift, outcast at boarding school, Mori retreats into the worlds she knows best: her magic and her books. She works a spell to meet kindred souls and continues to devour every fantasy and science fiction novel she can lay her hands on. But danger lurks… She knows her mother is looking for her and that when she finds her, there will be no escape.

Jo Walton is here today to talk about Inspirations & Influences. Please give it up for Jo, folks!

Among Others is my ninth published novel, and like most of my books it’s at an odd edge of genre. Edges of genre seem to be where I’m most comfortable, fantasy treated as SF, alternate history in the style of cosy mystery, Victorian sentimental novel where the characters are all dragons who eat each other. Among Others is a… well, it’s a fantasy memoir. Or it’s the story of an intellectual coming of age. Unlike all my other books it’s rooted in my own life — my own life a long time ago, but my own life all the same. It seemed as if it would be an interesting thing to do, and so I did it.

There were times when I was writing it when I wondered if I was allowed to do it, but it remained interesting. There were challenges. Because it was set in the real world, the magic had to have plausible deniability — it had to be unfalsifiable. I love the magic system I came up with, where magic works by association and chains of coincidence. There really could be magic like that and we couldn’t possibly tell. (I hate books where there are elves or werewolves in the real world and I’m supposed to have just never noticed. Do they think I’m stupid?)

The first bit of Among Others I wrote was a passage about the landscape where I grew up, in the Valleys. It was the seventies, there was still some mining, but it was coming to an end. It was a landscape full of mountains and trees and industrial ruins. I wanted to write about that, about the magic that places like that have for children, and in my book it becomes literal magic — the industrial ruins of factories and iron works have fairies living in them.

The other thing I found myself doing when I started using my childhood and adolescence as subject matter was writing about books. Among Others is a book about the redemptive power of reading. Mori reads to escape, but what she’s reading isn’t just for daydreams, it’s shaping the way she changes and what she thinks and how she can imagine the possibilities for her future. And she can do magic, that subtle kind of magic that rearranges the past so that things come out the way you want them to.

This book is so much about the love of reading and libraries that talking about influences seems almost irrelevant. Mori mentions at one point that she read through the library SF section alphabetically, from Poul Anderson to Roger Zelazny, so let’s just leave it at that.