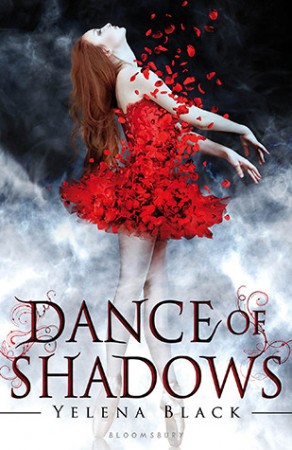 Dancing with someone is an act of trust. Elegant and intimate; you’re close enough to kiss, close enough to feel your partner’s heartbeat. But for Vanessa, dance is deadly – and she must be very careful who she trusts . . .

Vanessa Adler attends an elite ballet school – the same one her older sister, Margaret, attended before she disappeared. Vanessa feels she can never live up to her sister’s shining reputation. But Vanessa, with her glorious red hair and fair skin, has a kind of power when she dances – she loses herself in the music, breathes different air, and the world around her turns to flames . . .

Soon she attracts the attention of three men: gorgeous Zep, mysterious Justin, and the great, enigmatic choreographer Josef Zhalkovsky. When Josef asks Vanessa to dance the lead in the Firebird, she has little idea of the danger that lies ahead – and the burning forces about to be unleashed . . .

Stand alone or series: First book in a new series

How did I get this book: I got a review copy from the UK publisher

Why did I read this book: Because I was curious. Because I thought this could have been a great YA equivalent to Black Swan.

WARNING: this review contains spoilers as well as the occasional CAPS LOCK OF FURY AND FRUSTRATION. You have been warned!

Here, let me start by spoiling this review for you by cutting to the chase: Dance of Shadows is spectacularly bad.

It does actually have a promising premise that mixes the strenuous world of Ballet and a supernatural mystery involving disappearing prima ballerinas as well as demons. Oh premise, you could have been so much fun had you been proficiently handled. Alas, no. The execution is so poor, it takes that premise and turns into a story that is really and truly laughable in the end. I was reading Dance of Shadows and thinking about writing as craft – you know, that thing where skill meets care? I was dismayed at the utter lack of said craft when it came to Dance of Shadows.

The book opens with a prologue, in which a ballerina named Chloe dances a ballet number and then is taken over by something and disappearing – it is pretty obvious something supernatural happened.

Cut to the actual story as it begins at the New York Ballet Academy, the most prestigious Ballet School in the country, where 15-year-old Vanessa Adler is about to start her studies. She is a natural-born dancer with an incredibly powerful talent, one that requires little work. When Vanessa is dancing is like she loses herself to the dance and the real world disappears. But she doesn’t really like dancing, not really. The only reason why she is going to NYBA is to find out what happened to her sister Margaret who attended the school before disappearing three years before when she was about to start in the infamous Firebird ballet.

This is the same role that Vanessa herself lands after she effortlessly impresses the school’s main choreographer Josef Zhalkovsky. There Vanessa will discover that, in the past 20 years, other girls involved in the Firebird have disappeared. And when one of her new friends is gone without a trace she starts to wonder about her own safety.

Now Vanessa must find the time to investigate these disappearances in between rehearsals and falling in love with heartthrob #1, Zeppelin (recipient of the just now created The Book Smugglers Award for WORST CHARACTER NAME EVER) as well as fighting off the attention of heartthrob #2, Justin.

Where do I even start?

Perhaps with the question of plausibility. It is established that the New York Ballet Academy is the finest school in the country. And yet, people disappear without a trace and have been disappearing for the past twenty years and NOBODY DOES ANYTHING ABOUT IT or connects the dots that might link these kids to the Academy. Similarly, all the students seem to be stuck to this ONE choreographer that is a bully who ridiculously tells people off when they don’t know a number THEY HAVE YET TO LEARN. The novel ends with the choreographer disappearing and the school doesn’t really care that much at all. No fuss about it. You’d think that that such a prestigious place had better standards but apparently not.

Then there is the way that things are established rather than developed. As such the main character has a circle of best friends as soon as she sets foot in the academy as well as a group of Mean Girl antagonists (a group of “skinny” girls who all look and behave the same, of course). When one of her friends goes missing, her group of friends say things like “she’d never do this” but as they barely know each other, how could they know? This becomes especially problematic when combined with the issue of pacing. In SNAIL TIME: most of the book when dealing with minutiae like what people are wearing. At the SPEED OF LIGHT: the most important parts – the actual relationships, the characters’ arcs.

The relationship between Zeppelin and Vanessa is based on insta-love. When Vanessa exchanges a look with Zeppelin, without as much as having talked to him before:

It already felts like they were intimate, that they had known, maybe even loved, each other in some previous life.

Granted, this is a sign of a very immature, naive protagonist – except that there isn’t much in terms of character development at all.

The other love interest, Justin, is an arrogant prick. There is one scene when he is rude to her and one of her best friends says:

“He looked like he wanted to kill you. Or throw you against the wall and make out with you.”

But that’s ok because Justin is actually just trying to save her. As such he spends the entire book and most of their interactions going around in circles, being cryptic and rude to Vanessa and telling her to go away without explaining WHY (considering how she is CENTRAL to a plot to bring a demon into the world, you’d think people would be more forthcoming). But that’s ok because we all know that being cryptic really works and not listening to each other is really a logical way to behave even though Justin KNOWS Vanessa wants to know more about her sister’s disappearance and Vanessa KNOWS that Justin is aware of what is truly going on. Vanessa’s entire motivation is based on her wanting to find her sister so it is really understandable that she would spend little to no time actually finding out what happened to her (that’s irony, by the way).

That brings me to the issue of plot-sustainability. Because the prologue makes it so clear (to the reader) that something supernatural is afoot, the fact that the prologue even exists basically removes any potential tension from the rest of the book. At the same time, this makes for incredibly frustrating reading because the main character is completely clueless to the supernatural angle of the story. The entire arc of the novel has the main character questioning What Is Happening, when the reader knows full well what is happening – that all the ballerinas have supernaturally disappeared – even if we don’t have all of the details or the WHY (although one can infer). And then, when you do finally get to the why, it surfaces that some dancers are actually NECRODANCERS capable of using dance to do EVIL THINGS and raise demons FOR REASONS. And there is an actual secret underground dancing group called THE LYRIC ELITE. At that point I was hoping for the book to finish already and started laughing outright.

But then I started crying because how does tripe like this get published?

Notable Quotes/ Parts: No quotes but you can read chapters 1-3 HERE.

Reading Next: Aristotle and Dante Discover the Secrets of the Universe by Benjamin Alire Sáenz