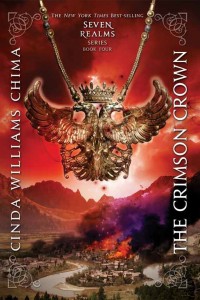 A thousand years ago, two young lovers were betrayed–Alger Waterlow to his death, and Hanalea, Queen of the Fells, to a life without love.

Now, once again, the Queendom of the Fells seems likely to shatter apart. For young queen Raisa “ana'”Marianna, maintaining peace even within her own castle walls is nearly impossible; tension between wizards and Clan has reached a fevered pitch. With surrounding kingdoms seeking to prey on the Fells’ inner turmoil, Raisa’s best hope is to unite her people against a common enemy. But that enemy might be the person with whom she’s falling in love.

Through a complicated web of lies and unholy alliances, former streetlord Han Alister has become a member of the Wizard Council of the Fells. Navigating the cut-throat world of blue blood politics has never been more dangerous, and Han seems to inspire hostility among Clan and wizards alike. His only ally is the queen, and despite the perils involved, Han finds it impossible to ignore his feelings for Raisa. Before long, Han finds himself in possession of a secret believed to be lost to history, a discovery powerful enough to unite the people of the Fells. But will the secret die with him before he can use it?

A simple, devastating truth concealed by a thousand-year-old lie at last comes to light in this stunning conclusion to the Seven Realms series.

Stand alone or series: The fourth and final book in the Seven Realms Series

Why did I read this book: I love the Seven Realms series – every new entry is significantly better and more complex than the book that came before it, and the characters

**NOTE: THIS REVIEW CONTAINS UNAVOIDABLE SPOILERS FOR BOOKS 1-4 IN THE SEVEN REALMS SERIES. If you have not yet read the first four books and want to remain unspoiled, look away!**

Newly coronated as Queen of the Fells, Raisa ana’ Marianna has inherited a Queendom on the verge of collapse and civil war. The Demonai Clans, led by her father Averill, pressure Raisa to marry one of their warriors; meanwhile the Wizards, led by the Bayar family, also have their plans to increase their power and legitimacy by intermingling their bloodline with that of the Gray Wolf Throne, pressuring a marriage between Micah Bayar and Raisa. This environment is made even more volatile as Clan children are kidnapped by opportunistic wizards, while in turn wizards are being hunted and killed in the queendom’s slums. To add insult to injury, while the Demonai and Wizards at each others’ throats, tensions mount from outside the Fells as neighboring kingdoms make their own proposals and prepare attacks in the hope of capitalizing on the unrest and internal strife.

As Raisa grapples with these impossible pressures to marry for political alliances, she also faces one of the most difficult predicaments of her young life: the desire of her own heart, an impossible love for Han “Hunts Alone” Allister. A street thief-cum-powerful wizard, Han is the only descendent of the great Demon King who broke the world, Alger Waterlow, a secret that makes him a much feared by Demonai and Wizard alike. As Han learns the truth of his lineage, of the Naeming, the Demon King and of Alger’s beloved Hanalea, he begins to hope that he can break the cycle of death, squabbling and fear, bring peace to the Seven Realms, and win Raisa’s heart.

The fourth and final book in Cinda Williams Chima’s Seven Realms series, The Crimson Crown has a whole lotta gravity and expectation attached to it – I have read and loved each of the books in this series, and Chima has somehow topped herself with each new entry. While this is an amazing feat, it also means that The Crimson Crown had a lot to live up to – but I’m happy to say that this ultimate book is a beautiful, brilliant sendoff to a truly fantastic series. In short, The Crimson Crown delivers, big time, and I freaking loved every second of it.

From a pure storytelling and series-ending perspective, The Crimson Crown finally answers the big, series-spanning questions at the heart of the Seven Realms books. Will Han and Raisa find a way to be together, despite the myriad obstacles in their path? Will Raisa be able to find a way to unite the clans and wizards (or “copperheads” and “jinxflingers”), without tearing her queendom apart? What is the real truth of Hanalea and the Demon King, and what is their true legacy? Not only does this final volume address these questions – it answers them with deft skill and care, making this a satisfying and rewarding read. To put it plainly, these answers are worth the wait. I especially love the truth about Hanalea, so loved and cherished as a saint by the people of the realms, and the villainous Demon King, who is so universally reviled. History is written by the victors, and after a thousand years the revisionists have done a hell of a job hiding the truth of the star-crossed love between Hanalea and Alger. The way this particular past doomed love plays out in the future, with Han and Raisa fighting against incredible prejudice, is beautifully done.

On a character front, the thing that impresses me so much about this series is how much the characters have grown and changed over the course of five books, in particular Raisa and Han. Raisa has gone from a slightly spoiled, slightly superficial princess who is easily duped by a pretty face, to a cunning, wise, and fair-handed queen. Han, too, has grown from a brazen young street lord to a wizard and powerful ally – albeit with a street lord’s sensibilities and determination. If The Gray Wolf Throne was Raisa’s book (and it really was Raisa’s), The Crimson Crown is more Han’s, as he understands just what he wants and sets his mind to getting it. I love that his trust issues – very true given his past and how everyone treats him – come to roost here, and he has to learn the hard way that he cannot keep secrets from those he loves.

Beyond Han and Raisa, the secondary characters are similarly wonderfully developed – from Raisa’s father Averill to Han’s former gang-mate and Raisa’s lady in waiting/bodyguard Cat. But the real standout to me in this book is, surprisingly, Micah Bayar. I love that Micah isn’t truly a bad guy – he’s kind of the Jamie Lannister, the Draco Malfoy of this world. That is, he starts out terrible but is revealed to be a nuanced guy with hidden depths. And, at the core of his actions, despite all of the questionable and self-serving acts he undertakes, he truly cares for Raisa. That is cool.

There’s a betrayal and a secret villain (whose identity is nicely hidden and executed), a buried legacy, and traitorous doings. There are answers, action and romance aplenty. Basically, The Crimson Crown has it all, and ends the series on a pitch-perfect note. I loved this book, and I now face the heartbreaking task of kicking a book off of my top 10 of 2012, because The Crimson Crown absolutely MUST be on the list.

It was the largest gathering of the Spirit clans Raisa had ever seen. They came from all over the Fells—from Demonai Camp to the west, from Hunter’s Camp to the east, and from the rugged northern reaches and the river valleys near the West Wall. Some traveled all the way from the ? shing camps along Invaders Bay. Demonai warriors rode in from the wilderness, proudly painted, feathered, and braided. Sun-weathered traders journeyed home from throughout the Seven Realms, bringing exotic goods and news from the down-realms. Even the elders said that the only other such celebration in their lifetime was the one that marked Raisa’s mother Marianna’s wedding to Averill Demonai—the ?rst marriage of a Gray Wolf queen to clan royalty since the Great Captivity began.

This time they feasted together on the lower slopes of Hanalea to celebrate the crowning of one of their own—Raisa ana’Marianna, called Briar Rose in the high country—as queen of the Fells. The camp was bedecked with garlands of thorny high country roses—Raisa’s clan totem, which always came into bloom near the time of her birthday.

Rating: 9 – Damn Near Perfection, and a solid 8/9 for the series as a whole

Over at Kirkus: The Iremonger Trilogy by Edward Carey

Joint Review: Year of the Horse by Justin Allen