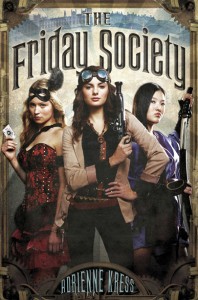 An action-packed tale of gowns, guys, guns –and the heroines who use them all

Set in turn of the century London, The Friday Society follows the stories of three very intelligent and talented young women, all of whom are assistants to powerful men: Cora, lab assistant; Michiko, Japanese fight assistant; and Nellie, magician’s assistant. The three young women’s lives become inexorably intertwined after a chance meeting at a ball that ends with the discovery of a murdered mystery man.

It’s up to these three, in their own charming but bold way, to solve the murder–and the crimes they believe may be connected to it–without calling too much attention to themselves.

Set in the past but with a modern irreverent flare, this Steampunk whodunit introduces three unforgettable and very ladylike–well, relatively ladylike–heroines poised for more dangerous adventures.

Stand alone or series: Can be read as a standalone (but has potential to become a series)

Why did I read this book: I’ve been looking forward to this book for a while! Ever since author Adrienne Kress reached out to us about hosting her cover reveal, pitching her book as a fun Charlie’s Angels-ish (starring three strong, different, unapologetic female characters), turn-of-the-20th-century-London adventure, I’ve been very excited about reading The Friday Society. I also had the pleasure of interviewing Adrienne recently at New York Comic Con about her new book, and after chatting with her I was even more excited to read it.

And then there was an explosion.

London, the year 1900. Three smart, savvy, very different young women are struggling to make their way in the world. Cora, a clever girl from the streets, has been taken in by the brilliant (if eccentric) scientist and inventor Lord White, for whom she works as a private secretary and lab assistant. Since being hired, Cora has become quite adept at putting things together and taking them apart, and has developed a fondness for explosions and experiments. Her position as Lord White’s secretary and right-arm woman, however, means she never really has the freedom or power to do as she so wishes, and more often than not she finds herself babysitting his lordship, instead of getting the respect she craves and deserves.

Former burlesque girl Nellie is the beautiful and charismatic assistant to the Great Raheem – a renowned magician, who Nellie lives with and sees as a father figure. The combination of Raheem’s mysterious aura and skill with illusions, plus Nellie’s natural beauty, showmanship, and trained flexibility/escape-artist talent make the two a formidable team.

Michiko is one of the most talented fighters London has ever seen – a young girl who trained (illegally) to become a samurai, Michiko found herself drawn to adventure and the unknown. When Sir Callum Fielding-Shaw offered Michiko a new life away from Japan as his fighting and training assistant, she took the plunge and left her home behind for Britain – a decision that she starts to regret when Callum turns out to be a completely disrespectful idiotic ass. Unfortunately, she’s stuck with him as she can barely speak and understand English and has no other friends or kin in London.

Cora, Nellie and Michiko are brought together when a mysterious figure begins killing people under cover of the London fog, with a sinister larger plan to tear the city apart. A mystery complete with secret societies, underground passageways, and rich and powerful citizens, Cora, Nellie and Michiko and their particular blend of skills are London’s only hope.

Well. I wasn’t quite sure what to expect when I started The Friday Society – there have been a rash of pseudo-steampunk YA books that try to ape Victorian speech and dress, and to be perfectly honest I haven’t been very impressed with the recent releases in this overpopulated subgenre. The Friday Society, however, is earnestly, refreshingly different. Instead of pretending at steampunk, making poor attempts at historical speech and dialect, The Friday Society has a completely modern voice – the girls think and speak (for the most part) in modern vernacular, and have undeniably modern sensibilities. While the book is set in 1900 London – and I know firsthand that Adrienne Kress did extensive research into the city setting at the turn of the century, down to the underground tunnels and such – it makes no attempts at Victoriana. While this was a jarring revelation in the early part of the book, I kind of grew to like it. It worked – and I appreciate something that is so brazenly, unapologetically modern.[1. As I was telling Ana in an email, The Friday Society is kinda like a reverse Baz Luhrmann’s Romeo and Juliet: historical period (complete with cool costumes and sets), modern vernacular.]

I think part of the reason this conceit is so successful is because of the strength of The Friday Society‘s female characters. I loved that Cora, Nellie and Michiko are completely different characters, that they are all strong and intelligent young women (albeit in different ways), and most importantly they are all friends and get along with each other. So often in this particular genre, we see a lone heroine that falls in love with one person (or two people), that may possibly have a sidekick that might be female, but often is defined by her relationships with the menz. Not so in The Friday Society – these women are friends first, they have each others’ backs, and while there are hints at romance for two characters, the romance here really takes place between the girls as they become friends and a secret society of kickass heroes.

Speaking of the romance angle, I love that there isn’t any trite romantic happily ever after crap in which each of the heroines stumbles across a super hot dream dude. While Nellie has a romantic interest, this interest is thoroughly on the backburner and hasn’t quite been developed (fodder for future books, perhaps). Meanwhile, Cora has a tryst with another character, who acts like a complete douche – the best part about this is that Cora realizes that this guy is a huge jerk and not worth her time, instead of being turned on by his jerkiness. THANK YOU. Also, I am so very relieved that none of the girls are in love with their bosses. THANK YOU AGAIN.

Other things that worked: The Friday Society showcases a diverse cast, as Michiko is Japanese, and Raheem is Persian and remains close to his fellow immigrants. While we don’t really get to explore Raheem’s character too deeply, we do spend a lot of time with Michiko, who is a convincing, wonderful character.[2. If we’re picking favorites, Michiko is easily my favorite of the three, and I absolutely love her character arc as she deals with an abusive and asshole of an employer, she bonds with a young boy as his teacher, and she finally feels worthy of a particular gift bestowed upon her early in the book.] I love that Michiko does NOT think in dialect, nor does she translate Japanese words into English in her head (for the most part, with only a few exceptions) – such translations are a huge pet peeve and so very irritating because no one thinks like that. Case in point, one of my favorite sections of the book:

“Someone is in the alley to see you.”

She understood most of the sentence except for “alley.” […] She stood up and followed Koukou out into the dark narrow hallway and down the servants’ staircase to the delivery entrance. They stepped outside into the alley behind the row of terraced houses. Ah. So “alley” meant alley. Good to know.

These praises said, there were some issues with the style that weren’t particularly to my taste – choppy sentences, perfunctory statements, the tendency to start chapters and sections with “And then [fill in the blank].” I should note that these stylistic choices are all very consistent throughout the book, and probably work for other people – they simply aren’t my favorite. The story itself is a little loose and could probably have been honed and slimmed down; similarly, the villain and the villain’s motivations could have been more convincing and better developed.[3. As is, The Friday Society‘s resolution feels very much like a Scooby Doo kind of mystery gotcha.]

All these things said, I enjoyed The Friday Society thoroughly, and I sincerely hope that there are more adventures for Cora, Nellie and Michiko in the future. Recommended.

AND THEN THERE was an explosion.

It was loud. It was bright. It was very explosion-y. Cora dove under the table and held her breath, waiting for the tinkling sound of glass to cease. It could have been a nice sound, actually. If it didn’t reflect her total incompetence.

She’d fixed the calculations, she’d double-checked the equipment. How was it possible to change everything about an experiment and still have it result in the same thing?