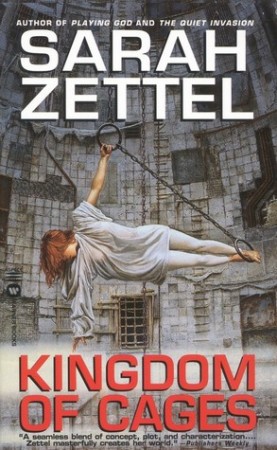 As humanity faces extinction, Chena and Teal Trust are chosen to immigrate as part of the “Eden Project” devised by the brilliant ecologists of Pandora, a planet closely matching Earth. Once they arrive, the Trusts quickly learn the scientists don’t want new blood–only raw DNA. When Chena’s mother is killed, Chena and Teal vow to fight the system that killed her.

Why did I read this book: I only discovered Sarah Zettel this year – having read and loved her recent American Fairy YA novels. When I learned Zettel was actually quite a prolific, award-winning, famous author, naturally I immediately gravitated to her extensive backlist (and I’m working my way through it bit by bit). Kingdom of Cages immediately appealed to me with its Michael Whelan (my favorite Dark Tower artist) cover and ecological/genetic dystopian premise.

Humanity has taken to the stars and, fueled by determination and greed, it has colonized the far reaches of the universe. But with great ambition comes great cost, and the colonists – all of the colonists – face certain death. Humankind faces a great Diversity Crisis; its distant worlds suffering wasting, slow deaths thanks to disease, ecological collapse, and, most damningly, poor genetic planning. The only hope for survival lies not with diseased and overpopulated Earth, but with the isolated, conservative and protective colony upon Earth-like planet Pandora. The only world with a pristine ecosystem (thanks to a stringent mission to study and observe the alien biosphere without invasive interference), Pandora’s scientists are reluctant to offer any aid to their human brethren – but aid they must, or face war and sure annihilation. Thus, the Eden Project is born.

In order to complete their research and form an actionable plan to end the Diversity Crisis, Pandoran administrators and scientists look to fresh, genetically compatible samples. (That is, poor human colonists and lawbreakers, whose bodies are forfeit under Pandoran law.) For new Pandorans, sisters Chena and Teal Trust and their single mother Helice, this is a desperate dangerous time. The Trusts posses the perfect genetic disposition for experimentation, and Pandora will let nothing stand in the way of the Eden Project – especially not a small thing like consent.

Although Kingdom of Cages is a standalone novel, it easily has enough content within to fill an entire series of novels on its own (hence the tardiness of this review). At first glance, the novel seems to be a member of ecologically-conscious post-apocalyptic dystopian science fiction. But… even that admitted mouthful of a label is a misnomer that does the book a disservice. Kingdom of Cages is so much more than an eco-crisis call to action – it’s a book jam-packed with meticulous worldbuilding on an impressive scale, impressive character relationships, and rife with important themes and questions (of consent, of ecological responsibility, of basic human rights). There’s a lot to unpack here, and there’s no way I can detail all of it in any coherent fashion, so I’ll just hit on the most important points to me, personally.

At the heart of the novel, Kingdom of Cages is a book characterized by a struggle for a middle ground. It’s interesting, because often ecological collapse or genetic modification dystopian novels can be didactic (to say the least) – Kingdom of Cages is actually refreshingly not. There’s an over-respect for the native ecosystem of Pandora, but at the same time a horrific lack of respect for the lives of the humans on the planet. There’s the desperate need (and argument) for genetic modification, but it’s one that must be tempered with social responsibility and, yes, consent. Really, that’s the fascinating thing about Kingdom of Cages for me: the question of a person’s rights to their own body (particularly women). From the moment that the Trust family sets foot on Pandora, Helice Trust is harassed about going to the “hothouse” – that is, she possesses a rare set genetic markers that make her the perfect candidate for carrying an engineered fetus to term. When volunteering isn’t in the picture, coercion and force come into play.

Add to this churning sea of thematic conflict the larger plotting tensions, such as the political tensions between the ruling families and social clans of Pandora (especially fascinating is the struggle between Administrator brother and Researcher sister Tam and Dionte). There’s the tension between the Pandora hothouse AI (not at all as omniscient as one might think) and her human charges. There’s the fight between the desperate Authority (which controls all trade throughout the universe) and the equally desperate Pandorans. And on a smaller but no less important level, there’s the tension between family members – especially between sisters Chena and Teal.

Which actually brings me to my favorite part of Kingdom of Cages – the relationships. The relationship between Chena and younger sister Teal rings as wholly, heartbreakingly genuine. These siblings are 3-4 years apart, and the aptly nicknamed “Supernova” Chena is often frustrated with her younger sister Teal. On the other side of that frustration, there’s Teal, who just wants to be heard, respected, understood by her older sister and her mother. Their dynamic as sisters who only have each other is painfully honest, and Zettel does a beautiful job at developing both of these characters (though, truly, Chena is the protagonist of this novel). There are plenty of other standout characters, too, including Chena and Teal’s tragic mother, Helice, and the Pandorans Tam, Nan Elle, and the impassioned Dionte. Heck, even the struggling AI, Aleph, reads as a fully-realized character in her own right.

Suffice it to say, there’s plenty to love in this impressive – if slightly sprawling and overwhelming – novel. My only complaint is that I wish this rather large story was spread across a series – or that there were other stories in this same universe, as I’m not quite ready to let it go.

Additional Thoughts: A quick word on the cover, which, though beautifully striking has absolutely NO relevance to the story at all. No one in this book looks a thing like the acrobatic woman depicted (Chena, Teal and Helice are all very dark haired, with darker skin tones). Similarly there aren’t any literal Thunderdome-like prisons on Pandora. Just saying.

Rating: 8 – Excellent; and without a doubt one of my notable reads for 2014

Reading Next: The Copper Promise by Jennifer Williams