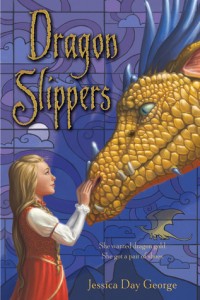 Many stories tell of damsels in distress, who are rescued from the clutches of fire-breathing dragons by knights in shining armor, and swept off to live happily ever after.

Unfortunately, this is not one of those stories.

True, when Creel’s aunt suggests sacrificing her to the local dragon, it is with the hope that the knight will marry Creel and that everyone (aunt and family included) will benefit handsomely. Yet it’s Creel who talks her way out of the dragon’s clutches. And it’s Creel who walks for days on end to seek her fortune in the king’s city with only a bit of embroidery thread and a strange pair of slippers in her possession.

But even Creel could not have guessed the outcome of this tale. For in a country on the verge of war, Creel unknowingly possesses not just any pair of shoes, but a tool that could be used to save her kingdom…or destroy it.

Stand alone or series: Book 1 in the Dragon Slippers trilogy

Why did I read this book: Ever since reading Philip Pullman’s Fairy Tales from the Brothers Grimm a few weeks back, I have been in the mood for some fantastic, classic fairy tale style fantasy. Case in point: since reading the Pullman collection, I’ve read, reviewed and LOVED The Ordinary Princess by M.M. Kaye and The Changeling Sea by Patricia McKillip. When I saw this book about dragons, adventure, and a clever peasant girl named Creel who finds herself tangled in a much larger adventure, I was thrilled.

Following the death of her parents, Creel and her brother are grudgingly taken in by her aunt and uncle. While her brother can pull his weight and helps out on the impoverished farm, Creel, unfortunately, has slightly less to offer. She has no dowry, no special beauty or magical ability, and therefore has limited prospects for marriage. To her aunt, Creel is another mouth to feed, until said aunt comes up with the brilliantly ridiculous idea to get rid of Creel and improve the family’s fortune. Creel’s aunt plans on dragging her niece to a rumored dragon’s lair and offer Creel up as a virginal sacrifice. If the tales from the past are true, then the dragon will take Creel prisoner, making her a bonafide damsel in distress. This, Creel’s aunt reasons, should appeal to a young lordling’s sense of adventure and bravery, and once the local lord hears about the fair maiden in the clutches of the foul dragon, surely he will rush to the rescue! By the time said lord finds out that Creel cannot turn straw into gold, that she hasn’t a penny to her name, and isn’t actually breathtakingly beautiful, it will be too late – he will be honor-bound to marry Creel (and provide a stable income for her family, of course).

It’s the perfect plan… except that Creel wants absolutely no part in it. When Creel is taken in by a reluctant dragon, she manages to talk her way out of being held prisoner for the unlucky young lord and leaves the dragon’s lair with a pair of beautiful blue slippers on her feet – a gift from the Dragon’s unexpected hoard (he collects shoes, not gold). Instead of heading home, Creel decides to leave her small village behind and make her way to the kingdom’s capitol where she plans on getting work as a dressmaker, for she has great skill with embroidery thanks to her late mother’s instruction. In the King’s City, Creel finds work, makes unlikely friends (including a dragon and a prince), as well as a very powerful enemy. Here, Creel finds herself in the middle of a kingdom teetering on the edge of war, and only she – and her very important dragon slippers – can help stop the bloodshed before it is too late.

When I started reading Dragon Slippers, I was immediately reminded of on of my longstanding favorite series – Patricia C. Wrede’s wonderful Enchanted Forest books. You know, the ones with Princess Cimorene, who runs away to become the King of the Dragons’ princess and housekeeper (the King of the Dragons being a female named Kazul). Dragon Slippers by Jessica Day George is similar – the same frustrated, headstrong, clever type of heroine and dealing with remarkable, quirky dragons – but also decidedly unique, as this particular story involves a kingdom at war, spies and traitors, and a magical pair of shoes. I’ve only read one other book by Jessica Day George prior to this one (the sweet, if slightly bland, Princess of the Midnight Ball), and I am so very glad I did – Dragon Slippers is a charming, thoroughly enjoyable adventure.

While it has been a while since I’ve read Princess of the Midnight Ball, one thing that I did remember was Day George’s beautiful economy of words and straightforward storytelling – the same applies here in Dragon Slippers. While the plot isn’t the most groundbreaking and plays with familiar fairy tale tropes – the kindly dragons (who are intimidating and capable of mass carnage but are generally kindly), the conveniently super talented heroine who is also headstrong in the extreme but supremely lovable because of this, the loquacious sidekick, the charming undercover prince, and so on, and so forth – the story is undeniably even-handed and well told.

The heroine of Dragon Slippers, Creel, is smart and accessible – even while her skill with embroidery is awe-inspiringly unparalleled. Despite her amazing talent (and it is properly amazing, as she is the best embroiderer in the history of embroiderers, apparently), Creel immensely likable. She has a big heart, she’s understanding and kind, and most importantly, she’s tenacious and stands up for the people and causes in which she believes. But while Creel is all and good, the different dragons (in particular the glass-collecting, golden-scaled Shardas and Feniul – an eccentric, dog-collecting dragon) steal the show. The tensions between dragons and humans, the misunderstandings between the two species, the anger and subsequent trust that Creel tries to forge between them is fantastically done. The supporting cast are, for the most part, well detailed as well – Creel’s love interest is predictable but charming, her friends saucy and fun. Even the main villain, while ridiculous and spoiled, has some depth that goes beyond initial impression.

The only criticism I have for Dragon Slippers regards on particular character – the traitor. Spoilers follow (highlight to read): This traitor of this piece is a fellow shopgirl, who has a twisted foot and walks with a limp. She is portrayed as hateful and jealous for being overlooked, and gives away the dragon slippers to the foreign princess in return for gold and favor. This character is called at one point a “cripple” by Creel. There is absolutely NO reason for this girl to have a lame leg – in fact, all it does to me is reinforce the horribly offensive stereotype of the crippled overlooked jealous girl with her *evil* leg and her *evil* personality. Needless to say, this particular twist bad taste in my mouth, and detracted from my overall enjoyment of the book (significantly).

And yet…all things said, I truly enjoyed Dragon Slippers, albeit with only one very significant reservation. Recommended, and I’ll certainly be around to finish the trilogy.

Glass. Everywhere I looked there was glass. I had had no idea that there were so many colors in the world, let alone that glass could be made in such hues. The cave was filled with stained glass windows of every size, and depicting every beast and god and legendary hero imaginable. They hung from the ceiling on fine silver chains, and somehow, despite the fact that we were deep in a hill in the middle of Rath Forest, light shone through them.

Reading Next: The Friday Society by Adrienne Kress