Title: Kiss of a Demon King 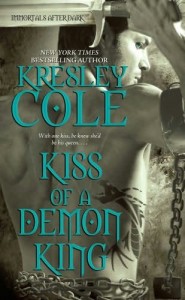 Stand Alone/Series: Book 6 in the Immortals After Dark series

Summary: For centuries, Rydstrom, fallen king of the Rage Demons, has fought to seize his crown, never relenting, until he is tricked into the lair of a exquisite enchantress. If she can tempt him to her bed, everything he’s worked for will be lost. Sabine the Sorceress of Illusions has long accepted her fate: to seduce a demon king. But once she kisses the brutal warrior, she realizes seduction is far from the punishment she’d feared. Yet just when they begin to fall for each other, one will be forced to make the ultimate sacrifice. Will Sabine give up the only life she knows to save her demon? Or will the proud king lay down his crown and arms to keep his sorceress…?

Why Did I Read the Book: These books are so much fun!!

Rydstrom is a Rage Demon, King of Rothkalina. His kingdom was lost, some 900 years ago, to Ormot the Deathless and he has been trying to find a way to defeat Ormot ever since but Ormot is as invincible as his name proclaims him to be. Now, at last there is some light at the end of the tunnel as Rydstrom finds out that there is a sword that can kill Ormot; Rydstrom sent his brother Caedon – whom he has a very strained relationship as Caedom is to be blamed for the loss of Rothkalina – to secure the weapon and this is the event that takes place in the previous book of the series,Dark Desires After Dusk. The events that take place in Kiss of the Demon King run parallel to those in the previous book and we finally learn what the freaking hell happened to Rydstrom that made this very controlled and righteous character not only miss his appointment with Caedon but also appear to be over the edge when Caedon shows up at his door near the end of Dark Desires.

What happened to poor Rydstrom?

Sabine did. Sabine, the Queen of Illusions, a sorcerer of great power, Ormot´s half-sister and who is clearly on the dark side of the force. Oh, she is also Rydstrom’s mate – the one woman he has been searching for his whole life. It has been prophesized that Rydstrom’s son will be the one to unlock the Wells of Souls, a mystical source of power that is located inside Castle Tornin, Rydstrom’s fortress. The catch is that Rydstrom can only have children after his seed is unsealed by his true mate and Ormot, who has some serious leverage over Sabine and her sister Lanthe sends her to capture Rydstrom and make him take her so that she can have the child. Sabine, who loves nothing more than to plot and connive, has a plan of her own and agrees to it.

A great battle of sexes ensue. Rydstrom is torn between this woman and his kingdom, his wish to take her and make her his is the greatest instinct of any of these Immortal males. But Sabine wants him to have sex wit her but only after he marries her in a ritual of his own race so that their son is legitimate. She tries to seduce him but he vows never to succumb and he plots revenge – and then the table is turned and he makes her HIS prisoner and this is when things grow towards a climax of sex, love-hate and eventually acceptance: his of her evil tendencies and hers of his good. Oh, and also, the thing with Ormot but whatever , world-building is not really the reason why I should be reading these books and I am finally able to let it go and read the Immortal After Dark Series for what it is:

The kinda like my mother’s strawberry-white chocolate-meringue pie which I know is full of empty calories but that I eat, repeat and lick my fingers when I am done. The kind that I know I will take immense pleasure whilst I am eating only to feel guilty later but a pleasure I am not able to deny myself nonetheless. Ever.

Kresley Cole’s offerings with this series are an Extreme Indulgence as my mom’s pie (with the added bonus of not making me fat!). I think this is actually a fantastic word to describe this series, its plots and its characters – EXTREME. As in EXTREMELY formulaic and EXTREMELY out there. The formula is always the same: extremely gorgeous and powerful alpha males, that search for their mate and when finding them realize they are not exactly what they expected them to be, and they have this inner struggle while at the same going through several scenes of coitus interruptus that can be seen as a HUGE and long preliminary session for the sex that happens when they are about to become downright bestial (going through the change – be them vampires, Lykae or Demon) , when they “mark” their mates and realize they will do ANYTHING to make them happy and being completely over the top possessive and protective while at it. And damn me if I don’t love all of them and read each book in one unstoppable afternoon. I wasn’t very keen on the previous book and thought I was going to be able to get over this also, EXTREMELY addictive series but paraphrasing Michael Corleone, just when I think I’m out, Kresley Cole pulls me back in.

So what is it in this particular book that makes it so freaking good: Sabine. Kresley Cole writes some kick-ass heroines – strong , capable, who don’t need their over-possessive, over-protective men to save them – and Sabine had a special edge of evilness to her that was great. Of course, the writer had to step-back a notch in her badness so that she could be paired-off with do-gooder Rydstrom by having her becoming friends with orphans and dragons and that dimmed my appreciation of the story a little bit. Not that she was THAT evil to start with, it is all about perception after all. Speaking of which, my first impression of Rydstrom was not that good –he first came across of a self-sacrificing sanctimonious pig who thought himself better than anyone – his brother and his woman and I thought Sabine deserved better but Kresley Cole strikes again and GODDAMN it, there comes Rydstrom completely in the throes of passion for this woman doing everything for her EVEN letting his kingdom go if necessary. At the end of the day, we all love a hero capable of everything for the heroine, but I think I love even more that the heroine is not a victim and ends up saving the day in the end. So. Much. Fun. Well done, Kresley Cole, for the time being I shall remain signed , sealed, delivered, yours.

In fewer words: I thought Kiss of a Demon King to be a better installment than the previous one but not quite as good as the other before that or Wicked Deeds (the 3rd book) , which I still think is the best one. In any case, if you like the series already you are sure to like this one!

I do think it is time that Kresley Cole brought back the Lykae, although I would not be averse to learning more about Lanthe and her enemy Thronos. Ha. Who am I kidding? I will so be there regardless.

Notable Quotes/ Parts: This is slightly spoilery (ok, it is very spoilery); Rydstrom fakes the wedding vows to Sabine because he only wants to make them when he can trust her and she can trust him so Sabine spends much of the book thinking she is married to him. In the end, when she learns he lied to her was reaction was awesome!

“Her brows drew together, and her bottom lip trembled. Rydstrom’s heart fell. “Ah, Gods, Sabine.” She was crushed. She should be. To act as if he’d wed her…
“Demon.I.Am” – she shook her head and swallowed hard – “so proud of you”. Her eyes were misty. “You got one over on me”.

Additional Thoughts: CJ of The Thrillionth Page is reading the series right now and she wrote a post investigating how Kresley Cole gets away with the things she writes. It is a cool post. Check it out here.

Verdict: Fans of the series know what they are going to find – alpha males, strong females, lots of sex and so much fun to be had.

Reading Next: Caliber by Sam Sarkar