Rise of the Corpses and Queen of the Dead are the two middle grade/young adult titles from Ty Drago in his ongoing Undertakers series. Featuring teens that are the world’s last hope against an invasion of alien creatures, occupying decaying human Corpses, The Undertakers books are a fabulous addition to anyone’s Halloween Reading list. 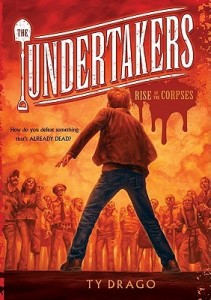 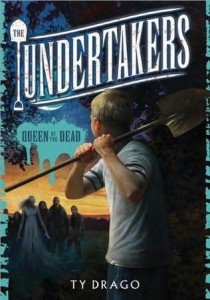 Here to talk about his Inspirations & Influences behind The Undertakers, please give it up for Ty Drago!

Jack London once said: “You can’t wait for inspiration, you have to after it with a club.”

When my wife first put it into my head the notion of writing a book for middle graders, I traveled my usual roads for inspiration: bad horror movies, music, walks, did I mention bad horror movies? Nothing jumped out at me — rare, but it happens — until I looked inward, well inward and way back.

When I was a kid, I wrote comic books, lots of them. They weren’t well drawn — not quite stick figures but not exactly “Watchmen” either. Still, the neighborhood kids seemed to appreciate them. Most centered around a child army of superheroes called “The Kid Kidets”. When I was eight, I didn’t know how to spell “cadets”.

The Kid Kidets possessed a variety of superpowers from flight, to weather control, to telekinesis, and everything in between. They lived in a huge installation hidden deep under the Antarctic ice. When trouble brewed, this installation would rise up from beneath that ice and the Kid Kidets would sally forth into the world to right all wrongs, captained by a brother and sister team named Tom and Sharyn Jefferson.

This went on for a long time, until finally my superheroes faced an enemy they couldn’t defeat: I grew up. And I forgot about them.

Then, struggling to draft an idea for a middle grade novel series, the Kid Kidets bubbled up from the deepest recesses of my aged memory. A child army, fighting wars that only they know about. Hmm…

In every important way, the Undertakers are the Kid Kidets “grown up”, so to speak. The villains they battle — the Corpses — are far more terrible than anything their counterparts in the 60’s and 70’s had to face. They have no superpowers, no hi-tech Antarctic headquarters. And they certainly don’t “sally”. But they remain the world’s last, best hope.

And their leaders are a brother and sister team named Tom and Sharyn Jefferson.

I even mention the “Kid Kidets” in Book One; it’s a little wink to the friends I grew up with — the audience for my child army’s original adventures.

“Stories don’t get old. Just storytellers.” Want to know who said that one?

Ty Drago is a computer programmer, husband, father, and a born Quaker who has lived in New Jersey almost his entire life. An avid fan of history, he has traveled extensively throughout the U.S. and Europe. Many years ago, Isaac Asimov gave a book signing in Philadelphia to promote his non-fiction work, One in a Trillion. Drago went to obtain an autographed copy, and when Dr. Asimov learned that Drago was a struggling young SF writer, he penned the following: To Ty: Please keep trying. Isaac Asimov. And he did.

We have a copy of Rise of the Corpses and Queen of the Dead up for grabs for one lucky reader! The contest is open to addresses in the US only, and will run until Sunday, November 4 at 12:01am (EST). In order to enter, use the form below!