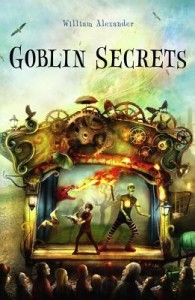 In the town of Zombay, there is a witch named Graba who has clockwork chicken legs and moves her house around—much like the fairy tale figure of Baba Yaga. Graba takes in stray children, and Rownie is the youngest boy in her household. Rownie’s only real relative is his older brother Rowan, who is an actor. But acting is outlawed in Zombay, and Rowan has disappeared.

Desperate to find him, Rownie joins up with a troupe of goblins who skirt the law to put on plays. But their plays are not only for entertainment, and the masks they use are for more than make-believe. The goblins also want to find Rowan—because Rowan might be the only person who can save the town from being flooded by a mighty river.

This accessible, atmospheric fantasy takes a gentle look at love, loss, and family while delivering a fast-paced adventure that is sure to satisfy .

Why did I read this book: Because it was shortlisted for the National Book Award and I bought it as soon as the list was announced last week.

In the land of Zombay, clockwork and magic walk side by side and real hearts are turned into the coal that fuels automata. There is a witch with clockwork legs called Graba who collects orphaned children to do her bidding and whose youngest charge is a boy named Rownie. Rownie has no name of his own, having inherited the diminutive form of his older brother’s name, Rowan, who disappeared without a trace.

In the land of Zombay, you can’t pretend to be what you aren’t so theatre and acting are outlawed. Everybody looks down at Goblins too but that doesn’t stop Rownie from joining a theatre troupe of Goblins – perhaps they will help him find Rowan. Perhaps, he will become a great actor.

In the land of Zombay, there is a flood coming.

Goblin Secrets is a weird animal. It is not a bad book but it left me wholly underwhelmed. It has several aspects that commend it: competent writing, an endearing (if not completely original) main character and the premise itself.

In fact, at first glance, Goblin Secrets is a book filled with incredible ideas, all taking inspiration from different genres. There is the Steampunk-ish world of automata; the Fantasy world of witches and magic; masks that imbue whomever wears them with a sense of power and sometimes even with a different identity. There are fairytale elements and Graba definitely comes across as a Baba Yaga figure but in a way, reminiscent of Dickens’ Fagin as well. There is a prophecy (the one that predicts that the Flood is Coming) and also a Quest which our hero undertakes as he seeks for his brother. There is even social commentary as the Goblins are not considered citizens and as such officially don’t belong in Zombay even though it is their home.

But all of these ideas and commentary are kind of thrown in there and the end result is disjointed, as these things actually never mesh together to form a cohesive whole. The Steampunk elements are just…there without any real explanation or impact in the storyline beyond the cool imagery. Animal hearts are turned into coal to fuel things (Why? How? Is this…magic? Or science?). And so on and so forth.

The story progresses as a series of almost episodic events; the first half is slow-moving, the second half rushed toward a confusing, unpolished ending. Put simply, there is the skeleton of a good idea here but it needed more: more meat and blood and heart to make it really come alive for me.

At the end of the day, I am puzzled. Whilst there are definitely interesting things about Goblin Secrets, to be completely honest I don’t quite see why it has been nominated for the National Book Award.