In a word: HARROWING. 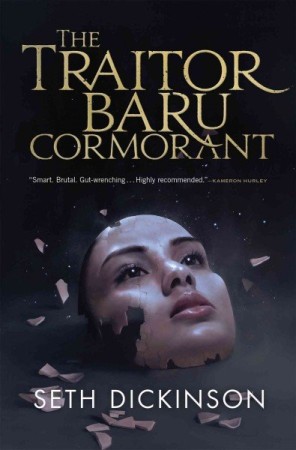 THE TRAITOR BARU CORMORANT is an epic geopolitical fantasy about one woman’s mission to tear down an empire by learning how to rule it.

Tomorrow, on the beach, Baru Cormorant will look up from the sand of her home and see red sails on the horizon.

The Empire of Masks is coming, armed with coin and ink, doctrine and compass, soap and lies. They’ll conquer Baru’s island, rewrite her culture, criminalize her customs, and dispose of one of her fathers. But Baru is patient. She’ll swallow her hate, prove her talent, and join the Masquerade. She will learn the secrets of empire. She’ll be exactly what they need. And she’ll claw her way high enough up the rungs of power to set her people free.

In a final test of her loyalty, the Masquerade will send Baru to bring order to distant Aurdwynn, a snakepit of rebels, informants, and seditious dukes. Aurdwynn kills everyone who tries to rule it. To survive, Baru will need to untangle this land’s intricate web of treachery – and conceal her attraction to the dangerously fascinating Duchess Tain Hu.

But Baru is a savant in games of power, as ruthless in her tactics as she is fixated on her goals. In the calculus of her schemes, all ledgers must be balanced, and the price of liberation paid in full.

Stand alone or series: Can be read as a standalone, but with a planned sequel.

Why did I read this book: I’ve had my eye on The Traitor Baru Cormorant since I first learned of its existence, several months back. The real question is: why did it take me so long to read the book, given that excitement?

Baru Cormorant is just seven years old when the Masquerade comes to her home, Taranoke, bringing their foreign ships, their paper currency, their wares and their ways. This alone doesn’t frighten young Baru, for Taranoke has always been a port of commerce: a vital hub of trade exporting sugarcane in exchange for textiles, citrus for sailcloth, buying and selling currencies from the neighboring provinces and islands who make their safe stops in Taranoke’s welcoming harbor.

But during Baru’s seventh year of age, something is different–she knows that her fathers and mother are worried about something in the air that has to do with the new Masks and their ships and their precise Aphalone tongue. And Baru–a precocious child, with a head for numbers–has a deep hunger to not only understand things, but to fix them.

But some things cannot be fixed.

The Empire of Masks conquers Taranoke with treaties and simple economics, and soon Baru’s entire way of life is upended. The Imperial Republic offers economic stability, education, and opportunity for its absorbed peoples, but it will not tolerate Taranoke’s traditions or family structures. In the Masquerade’s zeal for social “hygiene” and insistence that proper relations must only be between one man and one woman, so many are tortured and killed–for sodomites, the hot rod; for tribadists, the knife. Baru loses one of her fathers, father Solit, to the Empire’s purge–and her life will never be the same.

Baru–brilliant, hungry, enraged–vows to save Taranoke from the Imperial Republic and their ways. And in order to do so, she rises from within the Masquerade’s ranks, studying, preparing, scheming for power. At age eighteen, she is granted the eminent position of Imperial Accountant for Aurdwynn–a land of squabbling dukes, a strategic buffer to threatening realms and prime location for wealth to be amassed for the Imperial Republic.

This exalted position, however, is also Baru’s greatest test. For Aurdwynn has one hobby, one habit stronger than any other: rebellion.

To save her homeland, to truly become her enemy, to prove her loyalty to the Mask and execute the wishes of her traitorous heart, Baru will pay any price–even if those prices mean that the coffers of her heart and soul run completely dry.

This is the truth. You will know because it hurts.

Seth Dickinson’s debut novel is, in a word, HARROWING. There has never been a more appropriate use of that adjective to describe a book. The Traitor Baru Cormorant is glorious and soul-shaking; it’s the kind of read that rocks you to your very core. It innocently poses as a quiet book of a young heroine grappling with questions of identity, ambition, and vengeance under the cloak of macroeconomic theory… but Baru Cormorant is so much more than that. This is an epic fantasy novel without any dealings of the supernatural or fantastical–it’s an alternate history that concerns itself with the machinations of politics, of empire, of control, and the insidious implications of possessing and enforcing that power. Baru is a reading experience that is by turns hopeful and triumphant, but always, always exacts the cost of that hope and triumph in gold and blood.

Suffice it to say: I loved this book very much.

Written in Seth Dickinson’s crisp yet unassuming prose, The Traitor Baru Cormorant is an eminently readable work. Descriptively poetic without being ornate or overwrought, this novel manages to blend depth of characterization with a plot comprising courtly intrigue, simmering rebellion, and nail-biting economic policy–yes, you read that correctly. Nail-biting economic policy (more on that in a bit). The characterization is what drives Baru, with its eponymous heroine (anti-heroine?) and her journey from precocious child, to darling student, to savant and master, to symbol of the Rebellion and of the Empire. It’s a coming of age tale and a romance, it’s a story of power and those who play the game of power. (The subtlety and nuance here, the years of games and machinations and understandings of each cause and effect put other epic fantasy books about squabbles over/seizing power to shame.) Baru herself is sympathetic, infuriating, calculating, naive, and hateful–more than anything, she is utterly, completely dedicated to her end-goal. And, if you’ll permit me to go down a tangent, I recently watched a documentary about a startup business that experienced a high level of success, very quickly. One of the (now, former) founders of this successful company remarked that he now understands what entrepreneurs mean when they say they’ve sacrificed so much to get to the point they’ve reached–not that they’ve had to settle for time away from their families, or how hard the hours have been or the money. Rather, you start to realize that they’re talking about sacrificing who they are, making compromises with their deepest and strongest beliefs, and crossing lines they promised they would never cross.

Such is the tale of Baru Cormorant and her rise.

The startup analogy is, if you’ll permit me to continue with it, even more applicable when you realize that this is a book of economics. Baru Cormorant has a head for numbers and equations (but not so much for history), and she is assigned the role as the head accountant for a particularly rebellious region. As accountant, she is tasked with ensuring the accuracy of the many ledgers for the Imperial Bank, for maintaining the dominance of the Falcrestian paper currency backed by the gold that continues to sit in the bank’s coffers. As Baru controls the pursestrings of the region, she also controls the Duchy and Aristocracy, who rely on continual loans to grow, prosper, and compete with their neighbors. So, when Baru discovers a shocking type of laundering scheme in the works funding rebellion, she must also figure out how to counter it. And oh, trust me, it is fascinating. Dickinson manages to blend fiscal policy with historical precedent in an engrossing fantasy novel–think The Ascent of Money or The Wealth and Poverty of Nations or, yes, even Guns, Germs and Steel, but cross-pollinated with Game of Thrones or Jacqueline Carey-esque machinations for power.

But beyond inflationary policy and games of power executed through a single policy maker’s will, even more fascinating is the novel’s discussion of imperialism, the people who are absorbed under such expansion, and the cultural, social and societal changes that happen as a result.

Which brings me to the crux of the issue with The Traitor Baru Cormorant and much of the online discussion that has already occurred, and continues to occur regarding this book. Baru is a brown woman and a “tribadist”–she is a queer woman who guards this secret fiercely. She knows all too well the methods that the Masquerade will employ to exert its will–mutilation, torture, and death. The Empire of Masks insists on the binary, and allows only for the union of a man and a woman–it also delves in eugenics, forced breeding, and controlled intermingling of certain conquered and subsumed peoples (all for the betterment of the Empire, of course). Baru is terrified of revealing her secret, queer characters are tortured and killed in horrible ways, and the ultimate ending of the book involves a lover dying, sacrificing for another’s gain in tragic fashion.

My own experience is this: I am a biracial, straight, cis woman. As such, I approach this book from that perspective–but I cannot ignore or fail to acknowledge the wholly valid, thoughtful, and engaging other interpretations and reactions to this book that others, whom I deeply respect and admire, have written before me.

For me, and my own interpretation of Baru and Tain Hu’s prickly romance of power, anger, and rebellion–I thought it was heart-wrenching and beautiful in all of its terrible glory. I loved it. I cried, I railed, and I triumphed with Baru’s final decisions.

Many others do not feel this way–and I encourage everyone to read some of these discussions and viewpoints because they are important.

For me? The Traitor Baru Cormorant is a triumph of storytelling and economic policy, and one of my favorite books of 2015.

Trade season came around again. Baru was still too young to smell the empire wind.

The Masquerade sent its favorite soldiers to conquer Taranoke: sailcloth, dyes, glazed ceramic, sealskin and oils, paper currency printed in their Falcrest tongue. Little Baru, playing castles in the hot black sand, liked to watch their traders come in to harbor. She learned to count by tallying the ships and the seabirds that circled them.

Nearly two decades later, watching firebearer frigates heel in the aurora light, she would remember those sails on the horizon. But at age seven, the girl Baru Cormorant gave them no weight. She cared mostly for arithmetic and birds and her parents, who could show her the stars.

But it was her parents who taught her to be afraid.

You can read the first glorious chapter online here.

Rating: 9 – Damn Near Perfection and on my shortlist of best books of 2015.