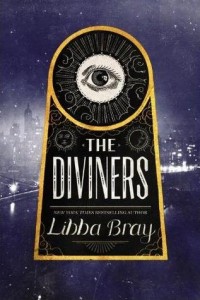 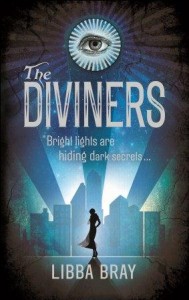 Evie O’Neill has been exiled from her boring old hometown and shipped off to the bustling streets of New York City–and she is pos-i-toot-ly thrilled. New York is the city of speakeasies, shopping, and movie palaces! Soon enough, Evie is running with glamorous Ziegfield girls and rakish pickpockets. The only catch is Evie has to live with her Uncle Will, curator of The Museum of American Folklore, Superstition, and the Occult–also known as “The Museum of the Creepy Crawlies.”

When a rash of occult-based murders comes to light, Evie and her uncle are right in the thick of the investigation. And through it all, Evie has a secret: a mysterious power that could help catch the killer–if he doesn’t catch her first.

New York City in the roaring twenties is the setting for The Diviners. In it, an extremely diverse cast of characters experience life in NY with its modernity, its speakeasies, its movies palaces and the theatre. They also grapple with the mysterious and the uncanny: quite a few of them have unnatural senses or gifts that stretch the imagination.

Evie O’Neill is the book’s main character, if you will. She’s been exiled from her hometown after she used her secret gift as a party trick, and she is now enjoying the good life in NY living with her Uncle Will, curator of The Museum of American Folklore, Superstition, and the Occult. That is, until a series of occult-based murders comes to light and Will is asked to help with the investigation. It becomes clear to Evie that something evil is happening in NY and that she and her friends might be at the centre of it.

In some ways this is a very easy review to write because I can pinpoint exactly what works and what doesn’t work. More to the point: The Diviners is capable of causing extreme irritation as well as cool enjoyment.

The irritation comes from its excesses – and if there is ONE word I could use to describe The Diviners it would be just that: excessive. This is an incredibly bloated book. It is overlong, with pointless strands of story as well as an entire subplot (that of the murders, if you can believe it) that if eliminated entirely, would absolutely make no different to the thematic core of the story. It had a lot of head-jumping as well, moving around loads – and I do mean LOADS – of characters’ viewpoints. In fairness, most of said characters are interesting and do add to the diversity of the stor, but I found it odd how clumsy their back-stories were dumped in the middle of the narrative, more often than not interrupting the flow of action.

Another thing I found excessive is the depiction of the historical background with a lot of description and a lot of slang use. The result is unfortunately “forced” instead of “rich” or “vivid”. At times, it felt like I was reading a Roaring Twenties 101 manual with everything Bray thinks we know about the 20s being included in the story.

That said, in spite these criticisms, the book is not a flop. I appreciated its cultural mash-up and its diverse cast of characters which include immigrants, PoC as well as LGBT characters. The premise is absolutely fabulous too, with this huge group of characters coming together and realising they have random supernatural powers in common – where they come from, why do they have these gifts is one of the mysteries of the novel and I guess one that will be explored in the ensuing books in the series. It is an intriguing concept (it’s like X-Men in the 20s!) and one that has huge potential.

Above all, I loved the vast majority of characters, especially Evie, who is a fun female character. I loved how she is written as thoroughly imperfect and self-centred and with an uncanny ability to completely fuck-up and do absolutely the wrong thing.

I shall be back for seconds.

My experience with The Diviners is very similar to Ana’s – I was frustrated with the book’s excesses, but lurking far beneath the layers of empty embellishment, there is a promising core, comprising strong characters and a compelling story arc. I didn’t *love* The Diviners, but I certainly enjoyed it – albeit with some sizable reservations.

From a setting and plotting perspective, The Diviners is at its most beguiling and infuriating. Libba Bray has a fantastic eye for setting and clearly has done a ton of research in the writing of this book, from the slang characters use (and how!), to the political events concurrent with the timeline of the novel, to the authentic feel and bustle of ’20s Manhattan. This is all excellently done…to point. There’s a line between well-researched setting and ridiculously over-the-top embellishment, and The Diviners, unfortunately, strays towards the latter. The slang is omnipresent and completely over the top – Evie adds the suffix “-ski” to practically every sentence that comes out of her pretty Sheba mouth, in ab-so-tute-ly annoying fashion.[1. I feel like every single one of these slang terms was used in abundance throughout the book.] There’s also a tendency to explain details of 1920s life to the reader, which feels inorganic and again, excessive.[2. As I told Ana in an email, the level of forced detail in this book would be the equivalent of some far future author writing about our particular day and age as follows: Thea booted up her slim Macbook Pro and opened the Google Chrome internet browser to check her gmail – Google Mail – account, and then becan to gchat – Google Chat – with her BFF – best friend forever – Ana. “OMG dude, the rager last night was so ridic I cant belive how #lame every1 was.” Thea opened another tab in the browser and pulled up Facebook, Liking a series of posts in her newsfeed before turning to her iPhone and skimming the tweets – from social media network Twitter – that kept popping up alerts on her handheld device. You get the picture.] The same can be said for the many passages detailing the setting, the clothing, the breeze skimming the East River all the way uptown to the UES. We get the picture.

There’s also the problem of excessive length and the dearth of actual cohesive, unifying plot – as Ana says, the novel does jump heads frequently, every chapter, without needing to and without accomplishing anything to truly move the core story forward. The book’s central conflict features a string of Dexter (circa season 6)-esque murders and tableaus, culminating in an anticlimactic finale that renders this entire murder/ghost storyline basically moot. To add to insult to injury, our Diviners never meet up, nor do they band together to form their organization of kickass 1920s X-Men! I must echo Ana here, again, as The Diviners is a “setting the scene” novel – which is fine, except that it takes 600 pages to get there, and the scene is still sadly missing some key developments.

Thankfully, The Diviners is saved by two things: the strength of Libba Bray’s writing (which is, as always, engaging and effortless), and the appeal of the novel’s main characters. Evie is our main protagonist and the majority of the novel follows her story, as she is ostracized from Ohio and makes her way to the Big Apple – where she instantly feels at home. Evie is charismatic and carefree, with a selfish streak a mile wide – she needs to be the center of attention, but at the same time, genuinely does care for her friends and family. Evie’s a character that is easy to love, but at the same time she’s a character that can be frustrating in the extreme. I love these types of conflicted characters, who are admittedly narcissistic, but do care beneath that veneer of confidence. I also of course loved thief Sam Lloyd (whom we had over for our stop on The Diviners blog tour, so perhaps I am predisposed to like him) and the sort of dark-side line that he’s walking by the end of the novel.

Most of all, I loved Theta and her heartbreaking story (when you finally get to it, it’s really moving, crushing stuff), her friend and piano player Henry (who has his own secrets), and Memphis (who goes through the ringer in this book). I love that the cast is diverse, that the story spans Harlem and people of color as well as a gay character, and women who are able to take their lives and destinies in their own hands. This is frankly awesome, and actually true in feel to the historical period and atmosphere of the novel.

Though it is not without its stumbling points and is an unnecessarily protracted novel that could use a good slimming-down, The Diviners is chock-full of potential. I’ll be around for the second installment – you can hang your hat on that.

In the town house at a fashionable address on Manhattan’s Upper East Side, every lamp blazes. There’s a party going on— the last of the summer. Out on the terrace overlooking Manhattan’s incandescent skyline, the orchestra takes a much- needed break. It’s ten thirty. The party has been on since eight o’clock, and already the guests are bored. Fashionable debutantes in pastel chiffon party dresses wilt into leather club chairs like frosted petits fours melting under the July sun. A cocky Princeton sophomore wants his friends to head down to Greenwich Village with him, to a speakeasy he heard about from a friend of a friend.

The hostess, a pretty and spoiled young thing, notes her guests’ restlessness with a sense of alarm. It is her eighteenth birthday, and if she doesn’t do something to raise this party from the dead, it will be the talk for days to come that her gathering was as dull as a church social.

Raising from the dead.

The weekend before, she’d been forced to go antiquing upstate with her mother— an absolutely hideous chore, until they came upon an old Ouija board. Ouija boards are all the rage; psychics have claimed to receive messages and warnings from the other side using Mr. Fuld’s “talking board.” The antiques dealer fed her mother a line about how it had come to him under mysterious circumstances.

“They say it’s still haunted by restless spirits. But perhaps you and your sister could tame it?” he’d said with over- the- top flattery; naturally, her mother lapped it up, which resulted in her paying too much for the thing. Well, she’d make her mother’s mistake pay off for her now.

The hostess races for the hall closet and signals to the maid. “Do be a darling and get that down for me.”

The maid retrieves the board with a shake of her head. “You oughtn’t to be messing with this board, Miss.”

Additional Thoughts: We are thrilled to be a part of the official The Diviners blog tour, and had the pleasure of interviewing Sam Lloyd for our stop. 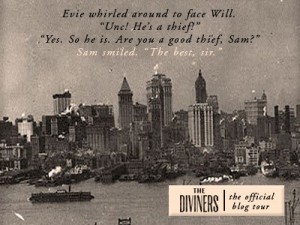 Check out the interview, and then enter for a chance to win a Diviners prize package, including a signed first edition and some other ’20s inspired swag.

Reading Next: Adaptation by Malinda Lo