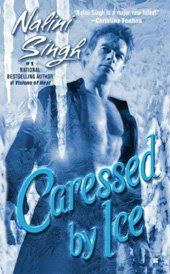 Summary: As an Arrow, an elite soldier in the Psy Council ranks, Judd Lauren was forced to do terrible things in the name of his people. Now a defector, his dark abilities have made him the most deadly of assassins—cold, pitiless, unfeeling. Until he meets Brenna… Brenna Shane Kincaid was an innocent before she was abducted—and had her mind violated—by a serial killer. Her sense of evil runs so deep, she fears she could become a killer herself. Then the first dead body is found, victim of a familiar madness. Judd is her only hope, yet her sensual changeling side rebels against the inhuman chill of his personality, even as desire explodes between them. Shocking and raw, their passion is a danger that threatens not only their hearts, but their very lives…

Why Did I Read the Book: even though book 1, Slave to Sensation did not rock my world, book 2, Visions of Heat, did. Reading book 3 (and 4 and 5) was only but a natural progression.

In the perfect silent world of the Psy there is no room for unwanted emotion, in their minds or in their souls. The Silence Protocol was implemented in an attempt to thwart the madness typical to their race and a secretive squad, the Arrow Squad, was created to control the backlash. Almost a myth for most Psy, except for the ones that come into contact with them. An Arrow is a warrior with spectacular mental combat abilities used to wipe out any Psy that may be breaking the Silence Protocol. Arrows are loyal only to the Silence Protocol. Or at least, they should be.

This is the first book in the Psy-Changeling series where the action takes place in the SnowDance wolf pack rather than in the DarkRiver leopard pack. A welcomed change of scenario – not because one gets tired of the DarkRiver pack ( far from it, how could one possibly get tired of such an amazing group of people?) but because learning about another pack adds another perspective to the world Nalini Singh has created.

Brenna is the wolf changeling that was at the centre of the mystery in Slave to Sensation – she was the wolf taken by the crazy Psy serial killer, the event that precipitated the action in that book. Rescued from a fate worse than death, in a combined effort of DarkRiver and SnowDance packs with the help of the Judd Lauren, a Psy who defected from the PsyNet joining the SnowDance pack.

Brenna is broken. The torture she endured has done things to her down to the very core of what she is – she was raped in every possible way and her mind was taken and ripped and controlled. Brenna is in the slow process of recovering; of bringing herself back together and to everyone’s consternation, the person that has helped her most is the cold, unfeeling Judd Lauren.

Judd was one of the first Psy to have ever defected from the PsyNet, ahem, that we know of, along with his family. They have been living in hiding with the SnowDance pack, having created their own net to support their minds – the LaurenNet.

Judd and Brenna have already a relationship as the book opens: they are sort of friends with Judd being the only person that does not overprotect her, unlike her brothers Andrew and Riley. He just lets her be. His pitiless, coldness, typically Psy, is exactly what she needs to be able to recover. But there is more to them because Brenna starts to realise that she wants to be near the man that helps her control her mind but also speaks to very heart of the wolf inside of her. Judd on the other hand, as cold as any Psy can be, also starts to develop feelings for Brenna but he just can’t allow this, whatever this is, to develop.

Because for Judd, touch and feelings foster the possibility of loss of control. Unlike the other two Psy protagonists in the two previous books Sascha and Faith, Judd’s problem is not getting away and surviving outside the PsyNet because he has done that already. Judd’s problem is that he used to be an Arrow and the Silence Protocol is whatever has been holding together his capacity to do violence. He believes he was recruited to the Arrow Squad because of what he can do, because of his mind abilities, he didn’t become a threat because he was an arrow, it was the other way around. He believes himself to be a prime example of the very thing the Silence was created for. And the most tragic element in their love story is that even though Judd is Psy to his core, he KNOWS that the Silence is an arbitrary condition – he would be fully prepared to accept feelings but he just can’t. He also believes that his own conditioning is what keeps his immense power in check and breaking it could bring death to the people around him , specially Brenna. His struggle to fight the feelings, to fight her closeness is a thing to behold as is the moment he realises he can not fight it, will not fight it anymore and gives in to feelings. They will eventually bring about is own death and every times he is near Brenna and feels, he gets pain triggers, and he bleeds, but the alternative now has become unthinkable.

The romantic plot in this book is absolutely extraordinary because both Judd and Brenna must go at great lengths to be with each other. Changelings crave touch because it centres them but it has the opposite effect to Judd. Brenna needs to learn to cope with a mate that won’t fit the mold she would like whilst Judd will learn valuable lessons from Hawke, the alpha male of the wolf pack (Changeling 101 lesson #1 always stand by your female in public). And they are both overcoming immense obstacles even though they believe there is no mating bond between them – their wanting to be together is all the more powerful for it. What the Psy has caused them: the torture that changed Brenna and the protocol that has Judd holding back is so cruel and heart wrenching. Their HEA was the most difficulty to achieve and the one that has melted my heart.

But the romantic element is by not by any means all that is amazing about this book. It is but one of the treads that are interconnected – there is the not so small detail that someone is trying to kill Brenna and that mystery is not revealed until the last chapters and the villain is not easy to guess. Their concept of good and evil is to be challenged when the mystery is finally solved. It does no detract from the overall story, quite the contrary. The mystery further develops all the conflict and it serves as a powerful wake up call to every one involved: evil is everywhere.

Furthermore, we get glimpses of our DarkRiver favorites and get to know a lot more about Hawke (Hawke! His book could not come soon enough) and the usual chapters from the Psy point of view, which starts a story arc that will expand throughout the next two books:

Kaleb Krychek, a cardinal Psy and the newest member of the Psy council has been doing something out of his own accord. He has a hidden agenda that has something to do with the implement of Protocol 1- a program to implement Silent at an organic level. The last desperate attempt to avoid more breakdowns and desertions. A creation of a hive mind, where freedom is impossible. Their head scientist is Ashaya Aleine (mark this name , because she is important!) a Gradient 9.9 M-Psy and there is a rumour going around that she is not entirely supportive of the Protocol which could only help the insurgents. Plus there is the ever present Ghost, someone very close to the Council that with help from Judd has been attacking and destroying laboratories connected with the project.

I open and close the review with the Psy world because that is one of the greatest creations in the series. We all have read about changelings in other series but the Psy is unique to Nalini Singh. And its uniqueness come from that everything that they are, everything that they believe in is a concocted lie. And they are coming down.

This is where I feel, Nalini Singh has come into full control of her writing, bringing it to perfection point. There isn’t a single thing I can think of that isn’t perfect about this book. It is honed to a point where everything meets, all is interconnected, it expands the world she has created, adding new information. Nothing is lost and everything has a point and a reason.

Hello Lord this is me Ana, please send my love to Nalini Singh for having created such an amazing story.

I love all the books in the series but Caressed by Ice is by far, my favorite.

Notable quotes/ Parts: I love every single thing about this book. But I particularly loved to see Judd, The Man of Ice to start accepting the things that were inherent to a changeling personality but not to his – like for example his reaction to Brenna calling him baby. Or how she would just tell him what to do “you need to hold me now”. He did have some instincts though and in the end he learns how to laugh and how to play, but only with Brenna. *sighs*

Additional Thoughts: I love all of the DarkRiver heroes, their Alpha and their Sentinels: Lucas, Vaughn , Nate, Clay, Dorian and I love how they are a perfect balance of human and animal and how they are at ease with every aspect of their personality embracing every single thing that makes them alive, be it good, be it bad. They just are the perfect Alpha heroes in any romance novel. And just as they are the epitome of the Alpha Male , it is easy for them within the reality of the world created by Nalini Singh, to be heroic and the dream man of any romance reader.

And this is why, amongst all of that goodness , Judd stands out as my favourite Nalini Singh hero to date. Because out of all of them he is the one that needs to embrace things he has never thought he would be able to. He is the one to have a long way to go, the most arduous path, and one that he believed would cause his own destruction but one he resolutely followed anyway because the option of not being with Brenna was just not an option at all.

Plus he has the coolest Psy powers of them all. Who cares about empathy and future predicting? Pffft. His telekinesis is so powerful he can TELEPORT, babies. And don’t even get me started on TK Sex. It is, quite possibly, the hottest sex I have ever read in a romance.

Verdict: This is one of the best paranormal romance series out there. There is an overall arc of Psy x Changelings that expands throughout all the instalments and every detail in the world building remains consistent. Romance wise? Dream worthy.

Rating: Caressed by Ice gets a 10 from me. It is perfect. I have read and re-read it more times than I can count.

Tomorrow: Nalini Singh Extravaganza day 2: Review of Mine to Possess.

Over at Kirkus: Waste of Space by Gina Damico