Today’s guest is Gigi Amateau, a YA writer whose new Historical book, Come August, Come Freedom: The Bellows, The Gallows and the Black General Gabriel tells the extraordinary story about a young slave named Gabriel who plotted a rebellion involving thousands of African-American freedom seekers in 1800. The author is here today to talk about Inspirations & Influences and writing the story of Gabriel. 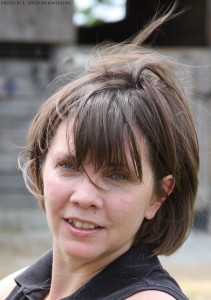 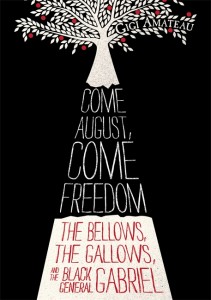 Please give a warm welcome to Gigi!

I’ve often wondered if land remembers. The earth does bury and keep artifacts, remembrances in a way, of those who went before us. Lovers’ initials carved into a sycamore tree. Bits of ceramics or glass. Tools of domesticity and labor. Bullets, bones, and weapons. Our landscapes hold onto shards of our hardscapes, too. Ruins of homes and outbuildings. Sections of fences. Footprints of abandoned towns and cities. Do our spirits leave a lasting impression upon the land, too?

In 1800, a young Virginia blacksmith named Gabriel spent the summer planning one of the largest slave rebellions in U.S. History. Gabriel lived, worked, and organized his fight for freedom in the region where I’ve lived since I was eight years old. He was born into enslavement just outside of Richmond, Virginia in 1776, and though his massive plan involving thousands of men would be thwarted by nature and man via calamitous weather and a late-hour betrayal, Gabriel’s plot heralded the triumph of self-determination over enslavement in America. While writing my historical novel for young readers, Come August, Come Freedom, that imagines Gabriel’s life, I was inspired by the conspiracy’s trial testimony, which illuminates the role natural landscape played in the rebellion.

The narrative of the rebellion that unfolded at the courthouse in September of 1800 shows that Gabriel was covering a lot of ground on foot as he moved about the hilly terrain of Richmond recruiting artisans, boatmen, and yeomen to join him in a war against slavery. Regional bodies of water – Young’s Spring, Brook Run, Chickahominy Swamp, and the James River — served as key gathering places for recruiting and planning. 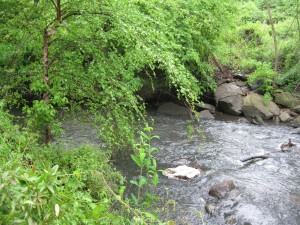 Today, near the site of Young’s Spring where Gabriel and his men planned the rebellion.

I can bear what I have born no more.
Are you a true-hearted man?
We have every right to fight for our country as does any man.
Here are our hands and here are our hearts.
We are about to rise and fight for our freedom.

The places are important to me, too. My family moved to Richmond in 1972. By then, much of Gabriel’s landscape had changed. Gone were most of the two thousand acre farms that once dominated the countryside, replaced with subdivisions and commerce alongside the roads that Gabriel traveled. Leveled were several of the city’s hills. And, Shockoe Creek, a formidable tributary of the James River and one of the most defining characteristics of the historic city was by then buried underground. 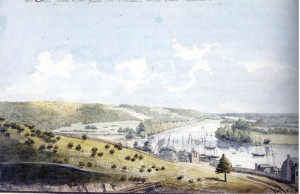 A 1796 scene of Richmond, Virginia by Benjamin Latrobe. Gabriel would have been 20 years old when Latrobe painted this view of the river.

Two hundred years after Gabriel’s birth, I attended elementary school not too far from the possible spot where Gabriel inquired about passage to Jamestown as he tried to outrun the statewide manhunt pursuing him. In a forest in northern Hanover County just east of Brookfield Planation, where Gabriel live and worked, as a child I climbed unburdened, untethered, and unparented to the tippy top of a pine tree fitted with re-bar spikes that allowed me to climb to the thinnest, highest part of the tree, so high that I looked out over the whole neighborhood. 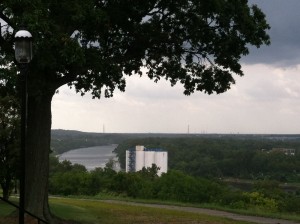 Today, view of the James River from Libby Terrace, recently named one of America’s iconic views by the American Association of Landscape Architects.

Remembering that place now, I can almost see through the centuries in my mind’s eye. I can almost see Gabriel walking home along a dusty path. He walks toward his shop just off The Richmond Road. Where he is walking toward is where I will go and eat pizza with my family on Friday nights when I’m twelve. Where he is walking from, I will roller skate three, four, five, times a week or more until they tear the rink down to build a new highway.

Later, in my teens, my friends and I will gather at the creek where Young’s Spring could long ago be found. We will sit on the hoods of our cars and listen to music. We’ll kiss and sing and hop across the rocks where Gabriel and Nanny and their family and friends Jupiter, Solomon, and Martin once gathered.

Impressions of Gabriel’s landscape remain. Though Young’s Spring is dry, the creek it fed still runs through the city’s Bryan Park as it did when Gabriel was young and when I was young, too. The James River itself, with falls that descend one hundred five feet over the course of seven miles, anchors the city of Richmond to its past and its future. And though I did not hear the land whisper of Gabriel when I was a child, I hear it now. Who are you? The river, the creek, the hills ask me. Are you true-hearted?

About the author:Gigi Amateau’s first book for young adults, Claiming Georgia Tate, was published by Candlewick Press in 2005. That title was selected as a New York Public Library Book for the Teen Age and hailed by author Judy Blume: “It’s rare and exciting to discover a talented new writer like Gigi Amateau.” The Wall Street Journal called the book “an ambitious push into the young adult market.”

She is also the award-winning author of A Certain Strain of Peculiar, a Bank Street College Best Children’s Book of the Year, and Chancey of the Maury River, A William Allen White Masters list title for grades 3-5. Come August, Come Freedom, her first work of historical fiction, was selected by the Southern Independent Booksellers Alliance as a Fall 2012 Okra Pick.

Gigi earned a Bachelor of Science degree in urban studies and planning from Virginia Commonwealth University, and has worked in the health and human services sector for more than twenty years. Born in northeastern Mississippi in 1964, she was raised in Mechanicsville, Virginia, and lives with her husband and daughter in Richmond. She loves reading about the Early Republic era in American history, riding horses in the mountains, gardening with native plants, and watching birds.