Today, are super excited to be the next stop on the official Amy and Roger’s Epic Detour UK blog tour with a guest post by debut author Morgan Matson on the inspirations and influences for writing the book. 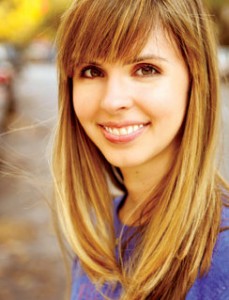 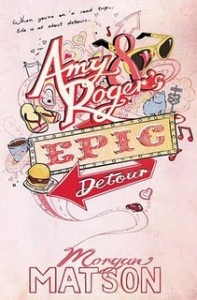 Please give it up for Morgan Matson!

The question that I seem to get asked most often is, “Did you really take the road trip in Amy & Roger?” And the answer is yes.

I have always loved road trips. When I first got my license, growing up in Connecticut, I’d always feel the urge to go to the next town I could drive to in an hour or so… if for no other reason than it was there and I hadn’t been yet. I went to college in California, and so my first cross-country road trip involved the reverse of Amy and Roger’s journey – a trip from Connecticut to California to get my car across the country. That trip was my first taste of just how fun an extended road trip could be, and just how big and beautiful and unknown to me most of America was. Five years later, as I was moving back to the East Coast, I needed to get the car across the country again. And this was the time I began thinking of how a road trip might encompass more than just a physical journey. That maybe it could tell the story of an emotional journey as well.

I wrote the first draft of Amy & Roger’s Epic Detour drawing on these first two road trip experiences, but with the knowledge that I wanted these characters to go places that I hadn’t yet been – Graceland, Kentucky, Colorado. So there were a lot of holes in that first draft, as I knew I couldn’t write about a place until I’d experienced it. So I turned in the first draft to my editor, flew to Los Angeles, rented a car, and started to trace the path I’d written about in the book. I told the rental company I would have the car for ten days – two weeks, max.

I was on the road for a month.

(And the rental car got very expensive.)

Because that’s the thing about road trips – even when you think you know where you’re going, the journey has a way of changing on you. I ended up taking detours, side roads, and basically going away from my own itinerary. I visited an old friend in South Carolina and had amazing barbecue, and my grandmother in Wichita, and ate of at NuWay Burgers – which, of course, made it into the book. Much to my shock, I was forced to get off the road early when it started snowing in Colorado (even though it was May and it was not supposed to snow in May, in my experience). A lot of what made it into the final version of the book was because of experiences on this road trip – like the Loneliest Road in America. This is an incredibly desolate road in Nevada that’s famously deserted – and I found it totally by accident. Like Amy and Roger in the book, I headed out of Yosemite National Park the opposite way of most people, and ended up on it, not knowing what I’d gotten myself into. It was terrifying while I was driving it – I was alone, getting spotty cell service, and had no idea how to change a tire – but after I’d found civilization again, I knew immediately that I had to go in the book.

I loved taking the research road trip across the country. A lot of the songs that I listened to ended up in Roger’s playlists from those places. And the pictures in the book are pictures I took while on that trip. The actual road trip I took influenced the book hugely, and made me realize that I’m actually a writer who needs to experience something before I can write about it honestly – which means I likely won’t be writing fantasy books any time soon.

Make sure to check out the other cool stops on the tour:

We have three copies of the book to give away. For a chance to win leave a comment here telling us about YOUR most epic detour. It can relate to a roadtrip buddy, snack, music or place (and make sure to share it on Twitter with other readers too using the hashtag #MyEpicDetour). Contest is open to UK addresses only and will run till Saturday 16th July 11:59PM (PST). Good luck!