A few months back, Karen Mahoney emailed us with the news that her Critique Partner and friend Chandra Rooney was coming out with her debut book, a novelization of the popular Tarot Cafe manhwa. Would we be game to read a genre we previously had little to no experience in?

Never ones to back down from a challenge, we agreed–and thus, the story of how we came in touch with the wonderful Chandra Rooney! We ended up enjoying The Wild Hunt, and had to have her over for an interview and giveaway (details on the giveaway at the end of the interview).

Without further ado, we give you Chandra! 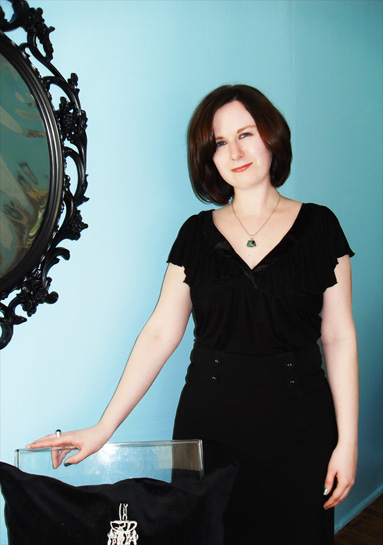 The Book Smugglers: Hi Chandra, thanks for agreeing to the interview. It is great to have you here.

Chandra: Thanks so much for having me.

The Book Smugglers: Your novel Tarot Café – The Wild Hunt was released on Jan 6th and it made the thirteenth (as of Jan 10th) place on Amazon.com’s ‘Bestselling New & Future Releases in Occult’. Congratulations, you must be delighted.

Chandra: Thank you! Yes, I was so excited on when it broke the top ten and was at #8 on January 8. Not that I obsessively checked its ranking last week or anything.

The Book Smugglers: Tarot Café – The Wild Hunt is a novel that is a companion to the 7 volume manhwa (Korean comic) Tarot Café by Sang Sun Park. Whose idea was it to have a novel in the same world and how did you come to be the writer? Were you a fan of the series?

Chandra: I would imagine it was TOKYOPOP’s idea. Specifically? Perhaps Jenna Winterberg, the editor that I worked with, but I can’t say for certain. I wasn’t approached until after they had Park on board.

In early September of 2007 I received an email from Jenna after she’d found my blog stating that they were looking to hire writers for various prose projects. The writing samples on my blog got my foot in the door, but they understandably weren’t enough to secure the deal. I offered the short story that had been published in On Spec magazine, and then did a sample chapter and outline adapting The Fairy vignette from volume two.

That remains one of my favorite vignettes in the series—and I remember thinking that it was one of the few in the first two volumes that had the potential for expansion. All of the others seemed complete.

I became a fan through working on the novel. Hopefully, I’ll be forgiven for coming late to the series, as we worked very hard to create something the fans would enjoy.

The Book Smugglers: Did you work with Sang Sun Park at all? Did she have to approve your work before hand?

Chandra: My interaction with Park was limited and through several channels—my editor, a translator, and Park’s representative. We asked her several questions about the comic series, and she provided answers. She had approval over the outline and a sample chapter. From what I was told, her comments were minimal because she trusted we were going to do things right.

The Book Smugglers: The Tarot Café- The Wild Hunt has a mixture of new and old characters. Old characters like Pamela and Belus who were the protagonists in the Manhwa are not your creation. Was it hard to find a balance between old and new and to write characters that were not yours? Did you find it limiting?

Chandra: Limiting isn’t quite the right term for it. I agreed to the project because it involved working outside of my comfort zone, but the existing world and characters would create a safety net of sorts. When I got too focused on NEW!SHINY! Jenna would remind me that we had to ensure Pamela and the other characters were involved and playing important roles, even if they didn’t get as much screen time.

The largest concern when you’re working with another person’s creative property is how to be respectful of the source material. I think Robert Shearman described it as finding the beating heart of the series. Fortunately, we were able to ask Park what she specifically wanted to see and she said “betrayal.” [smile] I think we’ve more than delivered our fair share of that in The Wild Hunt.

The Book Smugglers: The novel is categorized as a “Light Novel” – which is the Japanese equivalent of YA…but with illustrations. Did you have to follow any set conventions whilst writing The Wild Hunt?

Chandra: The comic rather establishes all the conventions—tone, genre, etc. Without giving away too much about the novel, I did feel that we should have been able to establish in-text that our boy Jack was bisexual. To me nothing more than a bromance can evolve between two heterosexual males, because they are heterosexual. Apparently stating explicitly that a character is bisexual and establishing a believable threat that a successful seduction can occur violates the rules of the shonen ai (boy love) genre.

That’s really the only convention that I found myself knocking fists with, but it’s a tie-in so you have to do what existing series has established as the rules for the world.

The Book Smugglers: The book and the series have a Tarot Reader as the main character and Tarot itself play a major role in the series and the books. Did you have to learn Tarot to be able to connect the cards to the events in the novel?

Chandra: Part of why I was approached is that Jenna noticed my blog profile stated I was an amateur Tarot reader. Nowhere near as proficient as our Kaz, mind you. The spread that features in the novel is the actual spread done for Bryn before I started plotting the outline. We had basic ideas in place, but the majority of the story evolved from the story the cards told us.

The Book Smugglers: The series Tarot Cafe uses a lot of old myths and legends – from the paranormal to the religious and historical. Similarly in your novel you use The Wild Hunt – a folk myth present in Europe especially in the Middle Ages. Were you familiar with the myth before the novel? Are you a studious of mythology and folklore?

Chandra: I was vaguely familiar with the myth—and I wanted to work with it, but I had never really been able to conceive of a full-length novel concept involving the hunt and I wanted to do more than just a short story. (If that makes sense.) The length of the light novel format presented the perfect opportunity, and Jenna had previous experience working with a novel focused on the myth.

I’m a folklore and history junkie! I think if you read anything I write, you’ll see that I fixate on what we believe and how we involve the divine in our lives—as well as the every day role of stories. Both our personal and cultural mythology and how that shapes who we are and how we view the world.

The Book Smugglers: Are you aware of any plans to translate the novel into Korean and market it over there as well??

Chandra: Not to my knowledge, which of course doesn’t limit the possibility of it happening. Fingers-crossed, yeah?

The Book Smugglers: The Wild Hunt is now done, what comes next? Another book in the Tarot Cafe universe, perhaps? Or do you have anything else on the go?

Chandra: I have two personal projects on the go. One is an adult mythic realism series adapting Japanese fox and western fae lore in a contemporary Canadian setting. Closer in scope to Charles De Lint’s Newford tales than Neil Gaiman’s American Gods. The first book, THE TALE OF ARIAKE, is out on submission.

The other project is a yet-to-be-titled young adult series. Most of the time I refer to it as “the Valentine thing.” It evolved from a reaction to the careful attention to realistic contemporary settings for both THE TALE OF ARIAKE and The Wild Hunt. So the Valentine Thing is far-future speculative mashing up magic and science.

The influences for it are largely the manic tone and adventurous plots of the new Doctor Who series with various reoccurring fantasy and technological elements of anime and manga. Which is a mildly pretentious way of saying no one time travels but there is a great deal of running and CLAMP-like magic circles. Plus a handsome young god with a baseball bat fighting gas-mask wearing monsters that come out of mirrors and kidnap the main protagonist’s best friend.

The Book Smugglers: Who, or what, are some of your influences as an author? Who are your favorite authors? Do you have a genre of choice?

Chandra: I have always read speculative (sci-fi /fantasy), but I also read a lot of mysteries growing up as well as horror and thrillers. I’ve also lived as an ex-pat in both Japan and the United States, and that experience has had a tremendous impact on the kinds of characters and stories that I write.

I want to like Heroes. I really do, but it nuked the fridge around the second episode of this season and not even the redemptive Syler arc could save it.

Chandra:
The Graveyard Book by Neil Gaiman
The Scent of Shadows by Vicki Pettersson
Snow Crash by Neal Stephenson
Midnight Never Come by Marie Brennan
Spirits in the Wires by Charles de Lint

The Book Smugglers: We Book Smugglers are faced with constant threats and criticisms from our dear significant others concerning the sheer volume of books we purchase and read—hence, we have resorted to ‘smuggling books’ home to escape any scrutinizing eyes. Have you ever had to resort to smuggling books?

Chandra: [laughs] No, I own surprisingly few books in comparison to most authors. There was a time when I’d read whatever I could get my hands on, but in recent years I’ve found I don’t have as much time for it. Thus, I tend to be a very picky reader—a book has to do a lot and has to do it well to earn a permanent place on my shelf.

But if we’re talking about guilty pleasure books…I have a weakness for Jeaniene Frost’s vampporn—I mean, Night Huntress series.

The Book Smugglers: Thank you again for your time and we wish you all the best!

Chandra: You’re welcome, and the very best to you as well.

Chandra Rooney can’t remember exactly when she got her first Tarot deck, but she can remember she wrote her first short story in grade five. In the years since, she’s graduated from high school, been an English teacher in Japan, studied both fine arts and design, and worked as a freelance graphic designer in Los Angeles. Presently, she’s probably writing. When she has her cards read, she likes to use the Queen of Wands as her signifier.

Follow Chandra online at her blogs Dreaming In Red and Good Karma Reviews.

And that’s not all (In our best “As Seen On TV!” voice)! We are giving away ONE COPY of The Tarot Cafe – The Wild Hunt! 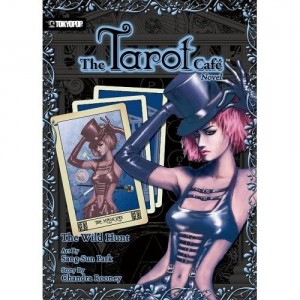 To enter, all you have to do is leave a comment. The contest is open to everyone and will run until Sunday Jan. 18 at noon (PST). Our sorting hat, aka RANDOM.ORG, will impartially select the lucky winner.