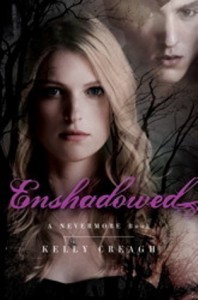 While Varen remains a prisoner in a perilous dream world where the terrifying stories of Edgar Allan Poe come to life, Isobel travels to Baltimore to confront the dark figure known throughout the world as the Poe Toaster. This man, the same man who once appeared to Isobel in her dreams and abandoned her in Varen’s nightmare world, holds the key to saving Varen.

But when Isobel discovers a way to return to this dream world, she finds herself swept up in a realm that not only holds remnants of Edgar Allan Poe’s presence, but has also now taken on the characteristics of Varen’s innermost self. It is a dark world of fear, terror, and anger.

When Isobel once more encounters Varen, she finds him changed. And now Isobel must face a new adversary—one who also happens to be her greatest love.

Stand alone or series: Book 2 in the Nevermore Trilogy

Why did I read this book: I was completely surprised by how much I loved Nevermore, the first book in this planned series. And, as that book ends on something of a cliffhanger, I have been on tenterhooks waiting for the sequel.

WARNING: This review contains unavoidable spoilers for the first book in the Nevermore series. If you have not read Nevermore and do not wish to be spoiled, LOOK AWAY.

It has been an agonizing few months since Varen Nethers has disappeared – the rest of the world thinks that he, a misfit and outsider, has simply run away. But Isobel Lanley knows the truth – that Varen is trapped in the Dreamworld, tricked by creatures called Nocs and a beautiful, cruel demon named Lilith that reigns with deception and fear. Ever since losing Varen to the Dreamworld on Halloween, Isobel has grappled with her guilt and broken heart, and is a shadow of her former bubbly, carefree self. Plagued by nightmares and waking dreams in which she is haunted by Nocs, by Lilith, and even by Varen himself, Isobel finally musters up a haphazard plan to save the boy she loves. Her last hope is to travel to Baltimore and on the eve of Edgar Allan Poe’s birthday, to visit Poe’s grave and confront Reynolds – the infamous Poe Toaster, and the specter that can bridge the gap between Isobel’s world and the realm of dreaming.

I’m gonna put on my sixth grade hat for a second to make this point: If you looked up the definition of “filler” in the dictionary (or on a wiki), you would find Enshadowed listed as a prime example. Creagh’s second novel has a major case of Middle Book Syndrome (i.e. The Empire Strikes Back, this ain’t).

To be blunt, nothing really happens in Enshadowed.

For the first 200 pages or so, heroine Isobel is (as one chapter title puts it) a ‘shade of a shade’ – she is an infuriatingly disengaged protagonist caught in a weird state of mental limbo, in which she can no longer function around her family or friends for whatever reason, and instead turns in on herself, giving up any pretense of trying to seem normal. Granted, she did lose her boyfriend and is being haunted by increasingly frequent apparitions, but Isobel’s complete lack of effort to keep it together is more than a little…frustrating.

In fact, frustrating is the real key word for Enshadowed. For most of this book, I found myself incredibly frustrated with Isobel. Frustrated with her lack of thinking or planning (there are many moments of unparalleled idiocy in this novel on Isobel’s part), frustrated with her tendency to keep secrets, frustrated with her disinterest in at least attempting to cover up her bizarre behavior. Most of all, it really bothered me that Isobel – for all that she feels guilty about putting her parents through hell – wouldn’t connect (or even try to engage!) with a family that clearly loves and cares deeply for her. Is this out of character? Probably not, as I’m sure most folks (including myself) were not the best or most communicative teenagers. Still, to read the depths of despair to which Isobel has sank – all because of a boy she barely knows! – is a little grating. Especially considering how effective and compelling the relationship between Isobel and Varen was in Nevermore – the chemistry between the two characters, their differences, and their investment in each other. Unfortunately, this has vanished completely from the second book as Varen is nowhere to be seen. Instead, we have a hollowly disengaged Isabel, and a deluge of descriptive nightmares.

On the positive side, Kelly Creagh does have a way with words and has managed to write a nearly 500 page book that is, essentially, all description. And description of surrealist dreamscapes, no less (complete with spinning clocks and labyrinthine rose gardens and the like)! That’s no small feat. She also manages to weave in more of the figure of Poe, his life and death (including the Poe Toaster) into the text, which is also handled deftly.

That said, reaching the end of the book only to discover that nothing has really happened over the course of this narrative makes for a frustrating reading experience. Minimal progress is made in the overarching arc of the trilogy (if any progress is made at all), and I ended the book exasperated with Isobel, confused with the novel’s lackadaisical plotting, and sorely disappointed with the book’s lack of meat and heart.

I might stick around to give book 3 a shot, but Enshadowed, for me, was a sad miss.

“Okay, Hawks,” Coach Anne said. “That’s a wrap. We can officially call that our last run before Nationals. At least until we hit Dallas.”

Isobel released a sigh, her shoulders slumping in relief.

Around her, tired whoops and clapping echoed through the gym, everyone breaking off to find their water bottles and towels.

A dull ache spread its way slowly through her as she allowed her muscles to unclench. Her whole body felt like a twisted rope unwinding.

Already, Coach had drilled the routine at least twenty times. Even if Coach had wanted them to go again, Isobel didn’t think she could have managed another pike basket toss, let alone landed one more full.

She knew she wasn’t the only one running on fumes either.

She’d felt the entire squad’s energy draining away little by little, like a machine operating on a single dying battery.

Coach must have felt it too. Isobel had no doubt that she would have drilled them until midnight if she hadn’t sensed her squad preparing for mutiny.

Then again, it wasn’t unusual for Coach to pull this kind of boot-camp, cheer-till-you-drop drillathon, especially right before a big competition. And this was the competition, after all. But her motivation for killing them like this lay less, Isobel knew, in ironing out any last-minute kinks and more in sending everyone home too tired to do anything but crash.

“I want you all to get some rest tonight,” Coach shouted above a sudden burst of laughing and talking, her words confirming Isobel’s suspicions. “That means no late-night Facebook updates, no texting, no two a.m. phone calls with Mr. or Miss Flavor of the Week, and no last-minute stunting in the living room—I’m talking to you, Miss Dorbon. I want everybody here in one piece and ready to go at five a.m. sharp. Got that?” Coach lifted one thick arm over her frizzy poof of brown hair and pointed at her wristwatch. “Bus leaves at six on the dot, so set your alarms. No hitting the snooze button forty times. No ‘I forgot my uniform.’ No excuses. I know I don’t have to tell any of you that we won’t wait if you’re late.”

Speaking of late, Isobel wondered what time it was. It felt like they’d been there for hours.

She glanced above the gym doors to the white-faced clock secured behind the protective metal grate designed to shield it from foul balls.

At the sight of the dark, familiar figure standing in the doorway, however, all thoughts of time flew from her mind.

Hands stuffed into the pockets of his black jeans, he watched her from behind reflective sunglasses, his expression calm, blank.