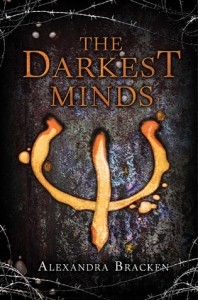 When Ruby woke up on her tenth birthday, something about her had changed. Something alarming enough to make her parents lock her in the garage and call the police. Something that gets her sent to Thurmond, a brutal government “rehabilitation camp.” She might have survived the mysterious disease that’s killed most of America’s children, but she and the others have emerged with something far worse: frightening abilities they cannot control.

Now sixteen, Ruby is one of the dangerous ones.

When the truth comes out, Ruby barely escapes Thurmond with her life. Now she’s on the run, desperate to find the one safe haven left for kids like her—East River. She joins a group of kids who escaped their own camp. Liam, their brave leader, is falling hard for Ruby. But no matter how much she aches for him, Ruby can’t risk getting close. Not after what happened to her parents.

When they arrive at East River, nothing is as it seems, least of all its mysterious leader. But there are other forces at work, people who will stop at nothing to use Ruby in their fight against the government. Ruby will be faced with a terrible choice, one that may mean giving up her only chance at a life worth living.

How did we get this book: We both picked up ARCs at BEA last year

Why did we read this book: There have been loads of positive reviews and the book has an interesting concept. Plus, Thea has a weakness for all things Dystopian (and had the pleasure of hearing Alex Bracken talk about her book at NY Comic Con last year, piquing her interest) and Ana LOVED the author’s first book, Brightly Woven.

The Darkest Minds is a book featuring very good ideas (dystopian + road trip + romance + kids with superpowers + DARKNESS!) that unfortunately do not jive well together to form a cohesive whole and whose biggest flaw lies in its completely implausible worldbuilding.

You see, in this world, a mysterious disease called IAAN has killed most children of America and those who survived have developed powers – frightening abilities (like mind reading and control, telekinesis, etc) that most don’t know how to control. The Government’s solution for the crisis is to round up the children and send them to “rehabilitation” camps which are in fact, brutal concentration camps where the kids get effectively locked up, abused and often killed. Thurmond is one of those, where our protagonist Ruby has been locked up since she was ten years old. Now sixteen, having survived this long by pretending not to have the terrible, fearful ability that she has, she is rescued by a group that aims to use her dangerous power in their fight against the government. But uncertain as to whether she can trust these people or not, Ruby breaks away and joins a travelling group of escapees whom she bonds with, as they travel across the country in search of help.

It is nary impossible to accept the premise of this worldbuilding: Why would the government set out to separate/kill the kids at all and mistreat them so much? For fear of their powers? Wouldn’t it make more sense to train them and study them? Especially considering how some of the kids had such tame abilities too. Furthermore, why would parents be ok with sending their kids off so easily? Not to mention how short-sighted this course of action is too because how can a country continue to exist without future generations?

Then you have the protagonist, Ruby: she is confused, scared, naïve, hesitant and these are all believable, consistent traits to have within the context of the novel given her background of being lied to, manipulated and terrified most of her life. I am glad that the author stuck to it and didn’t miraculously make Ruby all savvy and powerful all of a sudden. That said, this makes for an extremely frustrating reading experience because she is a painfully hesitant and mistake-prone protagonist and the problem here is that there is a weird disconnect between the things we see Ruby do and how everybody else in the book sees her. She is often described and perceived as strong and clever but that’s not how she comes across to the reader at all. I am uncertain as to whether this disconnect is actually on purpose but it makes for a very frustrating read.

It doesn’t help that the plot is scattered all over the place: it starts with great promise and ends with a bang (more on that later) but most of the book is spent on a road trip with our protagonist and her friends meeting up with several disparate groups and it is never really clear who they are and what is their purpose. I suspect this is an attempt at creating tension and suspense for future instalments but mostly it is simply confusing. The writing was serviceable but prone to clichés, the insta-romance that happens without development between Ruby and Liam was boring despite the fact that Liam was actually a super good guy and there is a creepy rapey villain (isn’t there always?).

There are definitely good things about The Darkest Minds: I loved the interaction between Ruby and her group of friends (especially Chubs) and the ending blew my mind away. Ruby does something that is so immensely fucked up and unforgivable but so within character that it almost made up for the entire book. Almost.

Like Ana, I started The Darkest Minds with high hopes – I had the pleasure of seeing Alexandra Bracken speak about this book at New York Comic Con last year, and have since been very keen on reading it. Unfortunately, my experience reading this book mimics Ana’s: while I love the idea and premise for The Darkest Minds, its deeply flawed world building, inconsistencies, and predictability were significant deterrents.

So, worldbuilding. The idea behind this novel is solid: Ruby’s is a world in which Idiopathic Adolescent Acute Neurodegeneration (IAAN) has decimated the child population, killing off some 95%+ of children when they reach the age of 10. The few survivors of IAAN develop strange new psionic powers – some are telekinetic, some can destroy electronics with a simple glance, some develop terrifying abilities to read other peoples’ minds and influence their thoughts. Immediately, all of the children in the United States have become Public Enemy Number One, and are rounded up by “Psi Special Forces” and thrown into prison camps where they are sorted by their abilities and put to work or exterminated. Apparently in this world, there are no names for the different types of abilities children develop – instead they are color coded (and everyone knows the colors): blue, green and yellow for the “safe” powers (e.g. telekinesis, electronics), red and orange for the “to be exterminated” powers (e.g. pyro-kinesis, telepathy/ESP). Immediately, one can’t help but question the basic core premise of this world. Would parents REALLY have given up their children so quickly, so easily, so uniformly, especially considering that the overwhelming majority of children have died of an incurable disease? WHY are children automatically rounded up and killed, made into universally reviled enemies of the state? I agree with Ana – it would have made far more sense to recruit these children and turn them into supersoldiers or some such tools of the government.

There are also a number of questions that are blithely unanswered/ignored: what is IAAP and where did it come from (why does it only affect children before puberty)? Does the rest of the world suffer the same fate? What is the purpose of the prison camps? What are the USA’s plans for repopulation once they’ve killed all the children? WHAT is the actual end goal here of the government and its Evil Dictator President?

Add to this some glaring moments of complete implausibility – at one point, our intrepid pack of heroes are driving around the Virginian countryside but make a pitstop at Waffle House. Where one of them goes into the restaurant in full light of day and buys food. This character is a teenager – in a world where all the teenagers are dead or imprisoned – and on the run from escaping prison. At another point, two of the main characters are having a conversation about classic rock (Jim Morrison and The Doors, The Allman Brothers, an offhand reference to Zeppelin), which feels completely out of place considering Ruby has been in captivity since she was 10 years old without access to radio, tv or anything else. Ruby, who has no idea how to wear a bra, or shave her legs (both are experiences described in the book), but knows about movies and proms and the Allman Brothers? No. Exacerbating the issue is the predictability factor. The twists in the story (e.g. the identity of the Slip Kid, and a character’s Truly Villainous – and yes, Rapey – nature) are paint-by-numbers. Yes, the romance is of the instant and bland variety, too.

These criticisms said, I do think that there is a lot of credit to be given to the character of Ruby, who goes through quite the arc in this book. She starts off as an incredibly passive and timid girl, unable to talk or act in the face of confrontation because of the paralyzing fear that she’ll be discovered as an Orange and killed. But over the course of the book, she grows, learns to trust, and makes a very powerful, game-changing move by the end of The Darkest Minds. I believed in Ruby’s character – as irritating and frustrating she could be to read at times – and I appreciate this turn of cheek by the end of the book.

Other good things: the characters of Charles “Chubbs” and his wry sense of humor (and the promise that he and Ruby will cross paths in book 2) and the powerful young Zu, the generally competent writing (if somewhat bland), and tantalizing finale.

Overall, I can’t complain too much because I finished the book and I want to know what happens next… but The Darkest Minds is not without its sizable flaws.

There is a 122-page excerpt you can read online HERE

Additional Thoughts: We are a stop today on The Darkest Minds Blog Tour with an Inspirations and Influences post by the author. You can read it HERE.

Ana: I struggled with this one. The ending almost nudged this to a 6 but in the end I was completely underwhelmed overall. So: 5

Thea: 6 – Good, Recommended with reservations. I, too, waffled, but ultimately enjoyed this book and I want to know what happens next.

Reading next: What We Saw at Night by Jacquelyn Mitchard

A Dude Reads PNR: Harry reads Sunrise in a Garden of Love & Evil by Barbara Monajem