Today’s guest author is Karen Maitland, author of medieval thrillers like Company of Liars, The Owl Killers and The Gallows Curse. To celebrate the release of her new book The Falcons of Fire and Ice (coming out this week), we invited the author to talk about her inspirations and influences. 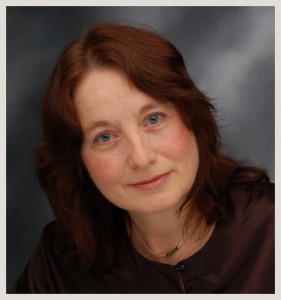 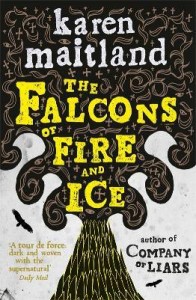 Please give it up for Karen!

I write dark medieval novels, heavily laced with the elements of the supernatural. The medieval world was one in which angels and demons, wraiths and monsters crept in and out of the lives of ordinary people. The supernatural was as real to people then as the fields they ploughed or the cathedrals they built. In my novels I try to see the world as they might have seen it, where the lines of reality and magic are blurred. There might be rational explanation, but what if there isn’t?

My latest novel, The Falcons of Fire and Ice, though it begins in Portugal, is mostly set in Iceland, a land of towering frozen glaciers and mountains of fire. When the royal falconer and his family in Portugal are sentenced to death by the Inquisition in 1564, his feisty daughter, Isabela, is forced to travel to Iceland to try to capture a pair of rare white gyrfalcons to ransom all their lives. But unknown to her she is being drawn to Iceland by a woman chained below the earth in volcanic cave, for Isabela holds the key to saving the people there from something that threatens to destroy them all.

The idea for this novel was conceived years ago when I travelled to Iceland. I descended into a cave where women had once given birth in the hot lake deep inside. It was a place where you could almost hear the voices of the past whispering from rock. Just as eerie were the vast glaciers where one false step could send you plunging down into deep ravines of ice. It was there I heard the ice singing. I never believed that tale before, but it does.

Folk legends and myths have always had a huge influence on my writing. The first thing I do when I travel to any country or district is to research the local legends because they are forged from the landscape and the people.

In Iceland I learned the legend of how the white gyrfalcon and its prey, the ptarmigan, were hatched from a single egg at the dawn of time, but were destined to become enemies. I could never get that myth out of head. I heard other stories too, of the hid-folk with great powers of good and evil, who live a parallel life in the hidden valleys and of the monstrous daugr or nightstalker, summoned from the dead, all of which I have woven into my novel. 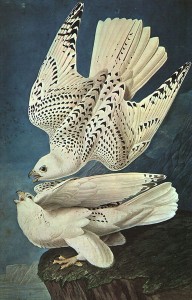 Myth and folklore influence all of my novels. One piece of folklore I love is about the mandrake, a plant that was believed to be a demi-god because it looked like a tiny human. The mandrake was so sacred it was carried by the ancient Egyptian pharaohs on their journey into the afterlife. The myth surrounding the magical power of the mandrake even helped to convict Joan of Arc of being a witch for she was accused of carrying a mandrake into battle. Mandrakes are said to grow only at the foot of the gallows. So, I thought it would be great fun to make a mandrake the rather spiteful narrator of my novel The Gallows Curse, after all a demi-god should have a voice. 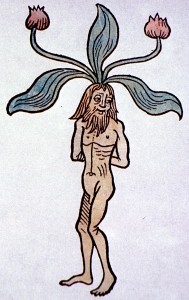 As well as folk tales, the other great influence on my writing is, as you can tell, is the landscape itself. Just as that volcanic cave inspired the story in The Falcons of Fire and Ice, so other places have inspired other novels. As a child on a camping holiday on Exmoor in England, I was shown a hollow in the grass with skeleton of a dead sheep and lamb in it. I was told never to camp in a hollow like that, because it’s where deadly marsh-gas collected. I couldn’t see any gas and didn’t believe this, until I woke in the night and wandered outside the tent. There in the moonlight I saw the hollow was full of luminescent white mist swirling around those bleached bones. That unearthly scene haunted me all my life and finally became a key scene in my novel Company of Liars.

Some places seem to hold the imprint of people who once lived there.

The Irish have a myth about ‘hungry grass’. This is a spot where someone died in the great famine and they say if you tread upon that place you’ll feel such terrible hunger and it will drive to your death. I think there are many places in all parts of the world where you get such strong a sense of the presence of those who once lived and died there, it’s like a shadow or a footmark on the landscape. I don’t know if you have ever felt that too in particular places or buildings? 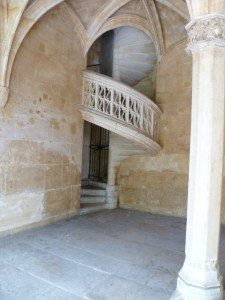 I always loved the Walter de la Mare poem ‘The Traveller’ which really excited my imagination as a small child, especially the lines –

‘But only a host of phantom listeners
That dwelt in the lone house then
Stood listening in the quiet of the moonlight
To that voice from the world of men.’

That poem sums up what inspires my novels, except that those phantoms are not listening to me, I am listening to them. I’m trying to hear the whispers of those wraiths crowded on the stairs telling their own ancient and wondrous tales of people and secrets and strange creatures long forgotten, all waiting to be brought back from the dead again.

About the author: I began writing historical novels after I became fascinated by the medieval period having visited the beguinage (city of women) in Bruges, which I then used in my novel The Owl Killers. I have now written four medieval thrillers, Company of Liars, The Owl Killers, The Gallows Curse and Falcons of Fire and Ice which comes out in August 2012. I’m hard at work on the next two The Vanishing Witch and The Raven’s Head.

A Chat With an Author: Susan Holloway Scott and Book Giveaway