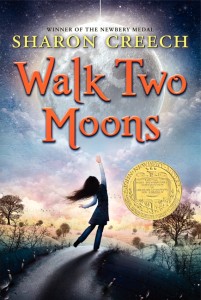 As Sal entertains her grandparents with Phoebe’s outrageous story, her own story begins to unfold — the story of a thirteen-year-old girl whose only wish is to be reunited with her missing mother.

In her own award-winning style, Sharon Creech intricately weaves together two tales, one funny, one bittersweet, to create a heartwarming, compelling, and utterly moving story of love, loss, and the complexity of human emotion.

Why did I read this book: I’ve had Sharon Creech’s books on my radar for a while now and then last week we got an email from HC letting us know that some of her books were selling at $1.99. These emails always work: I bought Walk Two Moons immediately as I had heard wonderful things about this award-winner.

“Never judge a man before you’ve walked two moons in his moccasins.”

Salamanca “Sal” Tree Hiddle is travelling with her grandparents on a cross-country trip to Lewiston, Idaho, where Sal hopes to get to in time for her mother’s birthday. “Hope” is in fact, something present at the core of Sal’s narrative and at the core of this trip: Sal hopes more than anything, to be able to bring her mother – who had recently left Sal and her father – back home.

Sal spins her yarn and tells her grandparents the story of how, after moving away from her adored farm to a place called Euclid in Ohio, she befriends Phoebe Winterbottom, whose mother disappears and whose family is trying to find answers.

Over the course of those days on the road, by spinning her yarn, Sal comes to know not only Phoebe better than she did before but also herself, her parents and her grandparents.

Walk Too Moons is really, three stories in one, all of them interconnected in a narrative that is structured brilliantly. Sal is spinning a yarn at the same time that she is unravelling it – is quite clever, really, how the three stories have parallels and how the characters find succour on each other. The road trip is impetus and frame for the beautiful picture that is slowly constructed.

More than anything though, is in its thematic core that its heart can be found. It is in the beautiful exploration of the friendship between Phoebe and Sal, which examines the often complicated nature of friendship where someone can both love and admire but also be deeply irritated by another. It is in the heart-warming dedication to all kinds of love (including first loves and first kisses and oh, blackberries) and its deeply emotional description of loss and death.

That said, my favourite aspect of the novel is the subtle way that Sharon Creech questions assumptions and expectations and how her story is marked by an unobtrusive examination of gender roles – especially those of mothers and wives – and how they can affect the lives of those around them.

This is the done wonderfully in the way how Sal observes Phoebe’s mother before her disappearance and how she is able to eventually build a parallel between the two mothers and how the two daughters have reacted and acted around them.

There is a lot that needs to be left unsaid here as examining the plot very closely would unforgivably spoil it. Suffice it to say that in a way, the narrative and the unspoken truths of the novel reminded me of another very recent – and equally good – novel: Liar & Spy by Rebecca Stead.

Walk Too Moons is a beautifully realised book that made me laugh and cry in equal measures and its loveliness is a thing of beauty.

A couple of awesome quotes from the novel:

“You can’t keep the birds of sadness from flying over your head, but you can keep them from nesting in your hair.”

It seems to me that we can’t explain all the truly awful things in the world like war and murder and brain tumours, and that we can’t fix these things, so we look at the frightening things that are closer to us and we magnify them until they burst open. Inside is something that we can manage, something that isn’t as awful as it had at first seemed. It is a relief to discover that although there might be axe murderers and kidnappers in the world, most people seem a lot like us: sometimes afraid and sometimes brave, sometimes cruel and sometimes kind.

Reading Next: The Spark by Susan Jane Bigelow