Book Review: Serafina and the Black Cloak by Robert Beatty

Oh, dear readers, how I loved Serafina and the Black Cloak.

Title: Serafina and the Black Cloak 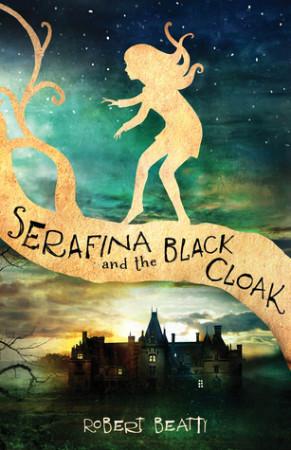 “Never go into the deep parts of the forest, for there are many dangers there, and they will ensnare your soul.”

Serafina has never had a reason to disobey her pa and venture beyond the grounds of the Biltmore estate. There’s plenty to explore in her grand home, although she must take care to never be seen. None of the rich folk upstairs know that Serafina exists; she and her pa, the estate’s maintenance man, have secretly lived in the basement for as long as Serafina can remember.

But when children at the estate start disappearing, only Serafina knows who the culprit is: a terrifying man in a black cloak who stalks Biltmore’s corridors at night. Following her own harrowing escape, Serafina risks everything by joining forces with Braeden Vanderbilt, the young nephew of the Biltmore’s owners. Braeden and Serafina must uncover the Man in the Black Cloak’s true identity . . . before all of the children vanish one by one.

Serafina’s hunt leads her into the very forest that she has been taught to fear. There she discovers a forgotten legacy of magic, one that is bound to her own identity. In order to save the children of Biltmore, Serafina must seek the answers that will unlock the puzzle of her past.

The Biltmore estate is a sprawling mansion, nestled in the deep, dark woods of North Carolina. Presided over by the wealthy and prestigious Vanderbilt family, the Biltmore has its regular share of glitzy parties, powerful and important guests and, as estates of this size are wont to have, an abundance of rats.

Serafina is the Biltmore’s C.R.C.–Chief Rat Catcher–who prowls the darkened tunnels and halls of the estate’s basement at night. Under the strictest orders from her Pa (the estate electrician and handyman), Serafina has lived all twelve years of her young life abiding by two simple but very important rules: 1. She must never go into the dark woods surrounding the Biltmore (especially not at night); and 2. She must never let anyone else, other than her Pa, know that she exists. These rules have kept Serafina safe, if a little lonely.

Everything changes, though, one fateful night when Serafina hears the soles of a man’s dress shoes clacking against the basement floor. When she investigates who this intruder to her realm might be, she spies a nightmarish specter dressed in a black cloak. Serafina immediately recognizes the man as a hunter–for Serafina herself is a hunter–except the cloaked man’s quarry aren’t rodents, but children.

Serafina witnesses the man snatch one of the guests, a child piano prodigy, from upstairs–and watches in horror as the young girl’s body is engulfed and absorbed by the black cloak. Barely escaping with her own life, Serafina tries to tell her father about the cloaked man and the missing girl from upstairs, but her warnings and fears go unheeded. Her father is certain that Serafina had a nightmare, and that is that.

As children continue to disappear with each passing night, Serafina becomes resolved to find the monster with or without her Pa’s help. Even if it terrifies her. Even if it means she must go against the two rules she’s followed her whole life. Luckily she finds an unlikely ally in Braeden, the young nephew master of the estate and surrogate son of Mr. and Mrs. Vanderbilt. Together, the pair must find the man in the black cloak before he strikes again.

Serafina and the Black Cloak–why didn’t I read you last year!? How did I miss your release and how did I forget that you existed? Oh, dear readers, how I loved this book.

First off, Serafina and the Black Cloak is legitimately scary–it’s the kind of middle grade horror/dark fantasy that I absolutely love, in the vein of Coraline or the more recent The Cavendish Home for Boys and Girls and Cuckoo Song. In the first two chapters alone, I felt that tingling thrill of being excited-scared–as Serafina rushes to escape the terror of the man in the black cloak using her own supernatural skill, I was utterly, hopelessly engrossed. (I started reading on the subway and, fun fact, actually missed my stop because of how engrossed I was.) The image of the black cloak and the decaying man within its folds, sucking up the souls and talents of children… well, that’s some creepy stuff.

And then there’s the matter of Serafina herself. An intrepid heroine who takes her job as C.R.C. very seriously, twelve-year-old Serafina is no ordinary little girl. Supernaturally fast, able to walk quietly and control her breathing so that no human (or rat) can sense her coming, readers immediately know that there is something different about this heroine. When she decides to stand against the man in the black cloak and break her father’s rules, we learn the truth of Serafina’s background and why she is so very different than other children. (I promise, it’s good–if not exactly unexpected.) I absolutely loved Serafina’s journey to self-realization and her desperate desire not necessarily to belong, but to find who she is and where she comes from. Serafina’s relationships with other characters, namely her Pa and Braeden, are similarly compelling and nuanced–when we learn why Serafina’s Pa has been hiding her, or when we witness Serafina making her very first friend, it’s powerful stuff.

So, we have darkness, and a delightfully twisted premise in the vein of the best middle grade horror, and an intrepid heroine. The other thing that Serafina and the Black Cloak has going for it is a vein of dark, fantastical magic flowing throughout the tale. There’s the cursed cloak, which shimmers darkly and allows its wearer to streak through the night at impossibly fast speeds and grants inhuman powers. But there’s also Serafina herself, who can silently move undetected from upstairs to downstairs without anyone catching her. There are missing villagers, and prowling yellow-eyed monsters, and other creatures of the night in this tale. There are magical forces at play and while I certainly don’t want to spoil those elements, suffice it to say that they are present in the novel, and the reveals are SO work the wait.

What else can I say? The mystery is perhaps a bit easier to solve than I would have liked, and Braeden in particular could have used some deeper fleshing out–but these are minor nitpacks in relation to just how winsome and delightfully creepy Serafina is. The book’s dramatic final showdown, the revelations about family and truths at the end, the insidious nature of the black cloak and its true impact on Serafina and the residents of the Biltmore are all utterly, wholly awesome.

In sum: I loved reading this book, and I cannot wait for book 2, coming soon this summer.

Serafina opened her eyes and scanned the darkened workshop, looking for any rats stupid enough to come into her territory while she slept. She knew they were out there, just beyond her nightly range, crawling in the cracks and shadows of the great house’s sprawling basement, keen to steal whatever they could from the kitchens and storerooms. She had spent most of the day napping in her favorite out-of-the-way places, but it was here, curled up on the old mattress behind the rusty boiler in the protection of the workshop, that she felt most at home. Hammers, wrenches, and gears hung down from the roughhewn beams, and the familiar smell of machinery oil filled the air. Her first thought as she looked around her and listened out into the reaching darkness was that it felt like a good night for hunting.

Her pa, who had worked on the construction of Biltmore Estate years before and had lived in the basement without permission ever since, lay sleeping on the cot he’d secretly built behind the supply racks. Embers glowed in the old metal barrel over which he had cooked their dinner of chicken and grits a few hours before. They had huddled around the cook fire for warmth as they ate. As usual, she had eaten the chicken but left the grits.

“Eat your supper,” her pa had grumbled.

“Did,” she had answered, setting down her half-empty tin plate.

“Your whole supper,” he said, pushing the plate toward her, “or you’re never gonna get any bigger than a little shoat.”

Her pa likened her to a skinny baby pig when he wanted to get a rise out of her, figuring she’d get so furious with him that she’d wolf those nasty grits down her throat despite herself.

“I’m not gonna eat the grits, Pa,” she said, smiling a little, “no matter how many times you put ‘em in front of me.”

“They ain’t nothin’ but ground-up corn, girl,” he said, poking at the fire with a stick. “Everybody and his uncle likes corn ‘cept you.”

“You know I can’t stomach anything green or yellow or disgusting like that, Pa, so quit hollering at me.”

“If I was a-hollerin’, you’d know it,” he said, shoving his poker stick into the fire. By and by, they soon forgot about the grits and went on to talk about something else.

It made Serafina smile to think about her dinner with her father. She couldn’t imagine much else in the world—except maybe sleeping in the warmth of one of the basement’s small, sunlit windows—that was finer than a bit of banter with her pa.

Careful not to wake him, she slinked off her mattress, padded across the workshop’s gritty stone floor, and snuck out into the winding passageway. While still rubbing the sleep out of her eyes and stretching out her arms and legs, she couldn’t help but feel a trace of excitement. The tantalizing sensation of starting a brand-new night tingled through her body. She felt her muscles and her senses coming alive, as if she were an owl stirring its wings and flexing its talons before it flies off for its ghostly hunt.

She moved quietly through the darkness, past the laundry rooms, pantries, and kitchens. The basement had been bustling with servants all day, but the rooms were empty now, and dark, just the way she liked them. She knew that the Vanderbilts and their many guests were sleeping on the second and third floors above her, but here it was quiet. She loved to prowl through the endless corridors and shadowed storage rooms. She knew the touch and feel, the glint and gloom, of every nook and cranny. This was her domain at night and hers alone.

Rating: 8 – Excellent, and would have made my shortlist of favorite books of 2015 had I read it last year.