You know when you read a good, entertaining book but you don’t really have a lot to say about it? This is the case with these four books. Because I don’t have loads to say about them I thought I should combine my thoughts in one post. Two of them are MG, two are YA. I don’t really think these have excellent crossover appeal to an adult public but all of them are recommended – to one extent or another, sometimes with reservations- to their intended audience. 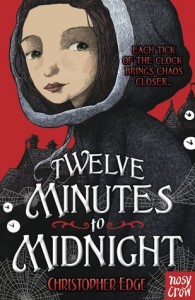 Penelope Tredwell is the feisty thirteen-year-old orphan heiress of the bestselling magazine, The Penny Dreadful. Her masterly tales of the macabre are gripping Victorian Britain, even if no one knows she’s the real author. One day a letter she receives from the governor of the notorious Bedlam madhouse plunges her into an adventure more terrifying than anything she ever imagined…

Penelope Tredwell is a 13-year-old orphan in Victorian London. She is an heiress who owns the bestselling magazine, The Penny Dreadful, which she runs and edits. She is also the writer of its most celebrated serial column of Gothic and Horror tales, which she writes under the pseudonym of Montgomery Flinch. As the serial gets more and more famous, she has to hire an actor to play the part in public. Then mysterious happenings at the insane asylum of Bedlam become known: all inmates start scribbling notes on any surface they can find about weird unexplained events, every night at twelve to Midnight. Penelope sees this as an opportunity to research her next story and together with the fake-Flinch she starts to investigate the mystery.

Twelve Minutes to Midnight was fast-paced and fun, featuring a coolt mystery with a dash of horror and with a main character who is a great example of a girl-protagonist. I loved how Penelope was assertive, smart and so opinionated (especially when there was a chance to question gender roles). My only real problem with this book is how much I had to suspend disbelief in order to appreciate it. It was hard to buy into how a 13-year-old was not only owner, editor and writer of a famous newspaper but also in the course of the novel, a master investigator. I think that had Penelope been a liiiiittle bit older, I would have bought into the premise more easily. Still, totally recommended. 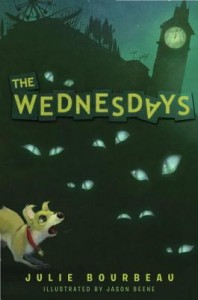 Max’s village is absolutely normal in every single way and on every single day—except Wednesday. Most of the townsfolk shutter their windows and lock their doors to hide away from the many peculiar things that happen—things like cats getting stuck in the vacuum cleaner and birthday cakes meeting fiery and horrific ends. But Max is too curious for that, and so, breaking every rule in the village, he searches out the cause of all the Wednesday weirdness. What he uncovers is a secret so devious—so dastardly and mischievous—that life as he knows it will never be the same. Max himself is not the same. Suddenly the mysterious little accidents so common on Wednesdays are happening to him on Thursdays, Fridays—even Saturdays!

What’s come over Max? And more importantly, is there any cure for a case of the Wednesdays? Mystery, magic, mischief and monsters abound in this slightly fantastical story of a human kid who wants to stay that way.

Max’s village is a normal little village every day of the week apart from Wednesdays, when the whole town barricades behind closed doors and windows and avoid going outside at all costs. For every Wednesday, peculiar things happen all over town – and if you are outside you will sure find yourself in trouble. Which is what happens to Max when his curiosity gets the better of him and he goes outside to try and find the Wednesdays: he starts to become a Wednesday himself. What does exactly that mean and how can he avoid becoming a Wednesday forever? He only has a few weeks to find out before it is too late.

Despite the fabulous, entertaining premise – I loved the idea of the Wednesdays and I loved how Max slowly develops a plan with his friends to fight them off – I thought the book turned out to be slightly disappointing. It was rather unsettling how the “hero” of the piece manages to solve the problem especially considering how the Wednesdays used to be children. I also wished there was more questioning about the girl-Wednesdays and what happened to them. Still all of it does fit with the fact that the book is sort of a Horror novel – and horrific it is indeed (although not really scary).

There was also one scene that made me uncomfortable in which a class of students fat-shame and humiliate their teacher and the narrative never questions that moment. This is probably my least favourite of the bunch but diverting and well-written enough to merit a mention. 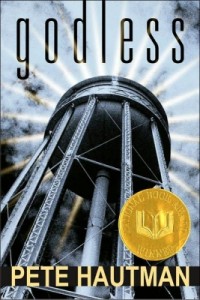 “Why mess around with Catholicism when you can have your own customized religion?”

Fed up with his parents’ boring old religion, agnostic-going-on-atheist Jason Bock invents a new god — the town’s water tower. He recruits an unlikely group of worshippers: his snail-farming best friend, Shin, cute-as-a-button (whatever that means) Magda Price, and the violent and unpredictable Henry Stagg. As their religion grows, it takes on a life of its own. While Jason struggles to keep the faith pure, Shin obsesses over writing their bible, and the explosive Henry schemes to make the new faith even more exciting — and dangerous.

When the Chutengodians hold their first ceremony high atop the dome of the water tower, things quickly go from merely dangerous to terrifying and deadly. Jason soon realizes that inventing a religion is a lot easier than controlling it, but control it he must, before his creation destroys both his friends and himself.

Fifteen-year old Jason Bock is an agnostic-going-on-atheist who, fed up with his father’s attempt to make him into a good little Catholic decides to start a new religion, worshiping the town’s water tower. He recruits his best friends, the girl he has a crush on and his main enemy to be a part of his Church – and the result is as you’d expect: mayhem. Especially considering how Jason does not really believe in his own creation – unlike his best friend Shin.

I am really loving reading Pete Hautman’s books and Godless is my favourite among these four, although not without reservations. I would say that Godless has its flaws in terms of character development and story per se (after all, many things go unsolved, some of the characters are not fully developed beyond stereotypes and some of the developments felt forced) but it is definitely a thought-provoking, interesting book. I am not sure if this would make sense but I think Godless is a perfect classroom book – with optimum material for discussion because it features awesome observations about organised religion; about questioning of one’s faith; about faith versus science; and about personal responsibility and charisma. It is a bit silly in parts but all things considered, I am happy I read it. Also, I should mention that it won the National Book Award for Young People’s Literature in 2004. 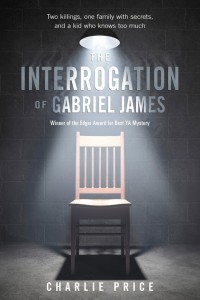 Eyewitness to two killings, fourteen-year-old Gabriel James relates the shocking story behind the murders in a police interrogation interspersed with flashbacks. Step by step, this Montana teenager traces his discovery of a link between a troubled classmate’s disturbing home life and an outbreak of local crime. In the process, however, Gabriel becomes increasingly confused about his own culpability for the explosive events that have unfolded.

The Interrogation of Gabriel James is a thriller that opens with a double funeral and proceeds with well, the interrogation of Gabriel James as the main material witness of a double murder case. Through a combined narrative of present (the police station) and past (Gabriel’s flashbacks), the story about his small town unveils and connects seemly unconnected crimes : an outbreak of fires and pet disappearances, sale of drugs, a bout of hate-crimes against Native Americans and two kids suffering abuse at the home of a former cult leader.

I picked this up because of the striking cover and the fact that it won an Edgar Award for Best YA Mystery. The narrative and deconstruction of the case are what make this a very engaging book and I enjoyed how we were never really sure about how reliable is Gabriel’s narrative. I loved how a lot of the revelations about the mystery came with revelations about Gabriel’s character and his home life as well. Although I thought that the racist subplot was undermined by how it connected with the rest of the story – especially considering how bigotry and hate-crime are such serious insidious issues, this is a good mystery novel. Mind you, the main thread connecting all these crimes is simply put, sheer wtfuckery stuff – all the more so after I learnt that the book is based on real events. World, you really scare the shit out of me.

Ebook available on kindle US, nook

The Interrogation of Gabriel James:

Ebook available on kindle US & sony