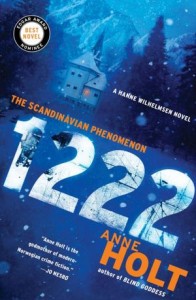 A train on its way to the northern reaches of Norway derails during a massive blizzard, 1,222 meters above sea level. The passengers abandon the train for a nearby hotel, centuries-old and practically empty, except for the staff. With plenty of food and shelter from the storm, the passengers think they are safe, until one of them is found dead the next morning.

With no sign of rescue, and the storm continuing to rage, retired police inspector Hanne Wilhelmsen is asked to investigate. Paralysed by a bullet lodged in her spine, Hanne has no desire to get involved. But she is slowly coaxed back into her old habits as her curiosity and natural talent for observation force her to take an interest in the passengers and their secrets. When another body turns up, Hanne realizes that time is running out, and she must act fast before panic takes over. Complicating things is the presence of a mysterious guest, who had travelled in a private rail car at the end of the train and was evacuated first to the top floor of the hotel. No one knows who the guest is, or why armed guards are needed, but it is making everyone uneasy. Hanne has her suspicions, but she keeps them to herself.

Trapped in her wheelchair, trapped by the storm, and now trapped with a killer, Hanne must fit the pieces of the puzzle together before the killer strikes again.

Stand alone or series: Can be read as a standalone novel, but technically the eighth book in the Hanne Wilhelmsen series

How did I get this book: Review Copy from the US Publisher

Why did I read this book: While I don’t read a ton of traditional mystery or thriller novels (i.e. those without some kind of supernatural/SFF twist), I am a fan of a good old fashioned murder mystery. When the US publisher approached us with a pitch for 1222, an Edgar award finalist starring a surly, wheelchair-bound female protagonist for a detective, I eagerly accepted a review copy.

As it was only the train driver who died, you couldn’t call it a disaster. There were 269 people on board when the train, due to a meteorological phenomenon that I have not yet understood completely, came off the rails and missed the tunnel trhough Finsenut. A dead train driver comprises only 0.37 percent of this number of people. Given the circumstances, in other words, we were incredibly lucky.

So begins Hanne Wilhemsen’s narrative in 1222, a story of snow-bound murder, 1,222 meters above sea level. Hanne is a former police inspector whose illustrious career ended after taking a bullet to the spine, rendering her wheelchair-bound and paraplegic. After a few years of increasing pain and complications related to her severed spinal cord, Hanne finally decides to seek help and boards a train headed to Bergen to meet an American specialist in back injuries and paralysis. Her plans, however, go awry when the weather deteriorates and her train derails, smashing into a tunnel wall.

Lucky, the wreck only claims the life of the train conductor and happens at the foot of Finse 1222, a mountainside resort that is both well-stocked with food and supplies, and nearly empty on account of the weather conditions. With the help of a local with a snowmobile, the passengers make their dazed way to the hotel and hunker down for the night. As the weather worsens, with an unprecedented blizzard howling outside and temperatures dipping beneath 30+ degrees below zero, Hanne and her fellow passengers find themselves trapped in Finse, without any connection to the outside world.

Then, one of the passengers is found dead. Murdered.

With no way to reach the outside world and no other law enforcement authorities at hand, Hanne is dragged into the mystery of the murdered priest. She must figure out a way to find the killer – or at the very least, keep the peace until the storm blows over – which becomes more difficult when a second dead body is found at Finse 1222.

Part of the novel’s success is because of its restraint in clue revelations – 1222 excels in its exercise of a (mostly) fair play whodunit, leaving enough relevant clues along the way to allow an apt reader to figure out the killer alongside Hanne Wilhemsen. The mystery is neither obvious nor impossible; it is just right. The killer’s identity and motive are clues that are seeded skillfully throughout the novel, with ample misdirection. The killer could be anyone: the angry runaway teenager or the goth girl that befriends him, the conservative television personality or the passengers’ supposed “savior” mountain dweller, the cool blonde that runs the hotel or the appropriately named doctor Magnus. Heck, there’s even a diverting side plot involving a mysterious high security passenger (or passengers), special operatives, and secret identities. And, to top all that awesomeness off, as a bonus, 1222 ends in an honest-to-goodness parlor scene, with Hanne interrogating and exposing the killer. Yes.

The other part of the novel’s success is due to the protagonist of Hanne herself. A middle aged, wheelchair-bound, surly ex-cop (and lesbian!), Hanne Wilhemsen is hardly your typical, idealized detective or brilliant ingenue. She’s abrasive as hell (without going over-the-top hardboiled), antisocial, but keenly and believably intelligent (without being Super!Brilliant!). When we first really get to know Hanne, she tells us:

In my day I was a good investigator. One of the best, I would like to think. That would be impossible without a certain curiosity when it comes to other people’s stories, other people’s lives.

It’s having people close to me that I find difficult.

Such is the slightly salty heroine that is Hanne. She’s utterly abrasive and selfish at times, but sardonically funny at others. She also shows flashes of real emotion – in the description of her partner and their daughter, for example, or her feelings of sympathy and responsibility for fifteen year old runaway Adrian, for another. There’s something incredibly compelling about Hanne, for all that she likes to pride herself on pushing people away – and I cannot wait to read more of her adventures (the fact that this is book 8 in her particular series is very encouraging).

Praises said, I should mention that there are some execution issues with 1222, mostly regarding the translation (which is, at times awkward, particularly when it comes to dialogue and confusing, non-continuous conversations). There also is a degree of repetition when it comes to key phrases or observations of Hanne’s, i.e. everyone’s general level of hygiene (bad), the repeated assertions that everyone is acting very Norwegian (Hanne’s words, not mine!). I should mention, though, while the repetition isn’t my favorite, I did enjoy the very different and overt Norwegian-ness and mores of the novel.

Overall, 1222 is a fantastic mystery that introduces Americans to a fascinating new detective and heroine in Hanne Wilhelmsen. I can see why Anne Holt is the bestselling crime and thriller author in Norway, and I eagerly await more english translations of her work. Absolutely recommended.

As it was only the train driver who died, you couldn’t call it a disaster. There were 269 people on board when the train, due to a meteorological phenomenon that I have not yet understood completely, came off the rails and missed the tunnel through Finsenut. A dead train driver comprises only 0.37 per cent of this number of people. Given the circumstances, in other words, we were incredibly lucky. Although many individuals were injured in the collision, these injuries were mostly minor in nature. Broken arms and legs. Concussion. Superficial cuts and grazes, of course; there was hardly one person on board who wasn’t physically marked in some way after the crash. But only one fatality. Judging by the screams that ripped through the train minutes after the accident, one could have gained the impression that a total disaster had taken place.

I didn’t say anything for quite some time. I was convinced that I was one of only a few survivors, and besides I had a tiny baby I had never seen before in my arms. It came flying from behind when the impact occurred, brushed against my shoulder, and hit the wall right in front of my wheelchair before landing on my lap with a soft thud. In a pure reflex action I put my arms around the bundle, which was yelling. I started to get my breath back, and became aware of the dry smell of snow.

The temperature dropped from unpleasant static heat to the level of cold that threatens frostbite within a remarkably short time. The train listed to one side. Not very much, but enough to cause pain in one of my shoulders. I was sitting on the left in the carriage and was the only person in a wheelchair on the entire train. A wall of dirty white was pressing against the window on my side. It struck me that the enormous quantities of snow had saved us; without them the train would have jackknifed.