Joint Review: A Confusion of Princes by Garth Nix

Title: A Confusion of Princes 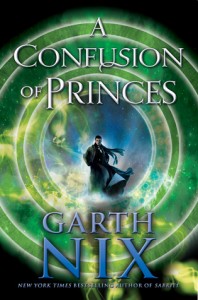 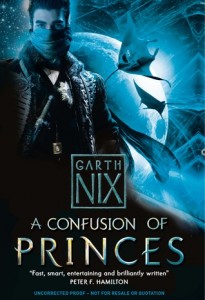 You’d think being a privileged Prince in a vast intergalactic Empire would be about as good as it gets. But it isn’t as great as it sounds. For one thing, Princes are always in danger. Their greatest threat? Other Princes. Khemri discovers that the moment he is proclaimed a Prince.

He also discovers mysteries within the hidden workings of the Empire. Dispatched on a secret mission, Khemri comes across the ruins of a space battle. In the midst of it all he meets a young woman named Raine, who will challenge his view of the Empire, of Princes, and of himself.

Why did we read this book: It’s a standalone Science Fiction space adventure from Garth Nix (who Thea loves) which sounded liked something we would both enjoy. Seriously, we have been salivating for this title for ages.

A Confusion of Princes is a Sci-fi novel complete with space travel, adventurous hijinks, a dash of romance and an attempt (emphasis on the attempt) at exploration of what it means to be human.

Khemri is an enhanced human being, a Prince of the Empire, expected to do great things once he leaves the secluded temple he grew up at. It is only when he does so that he realises the truth: there are ten million princes all over the Empire and all of them compete against each other to death (although most princes are allowed to be reborn). More than that though and to Khemri’s dismay, he can’t really do everything and anything he wants as he expected – there is a very strict hierarchy of princes, rules he must follow, not to mention the complete obedience owed to the Imperial Mind – a supposedly omniscient, omnipresent, omnipotent being. This story is Khemri’s own story – narrated by him – of how he has died and been reborn three times and describing his transformation from a Prince of the Empire into a full human being.

I am slightly conflicted about A Confusion of Princes: I absolutely loved parts of it but felt that ultimately the book fell short of its full potential.

First of all, I loved the narrative voice. Khemri’s voice is sarcastic, funny, self-aware and it was just what made the book such a pleasure to read. As he begins his life as a Prince he is expected to be absolutely loyal to the Empire and to never question anything. He is also designed to fully believe he is the best thing the galaxy has ever seen (his own words). As such and as the book opens, Khemri is arrogant, self-serving, believing regular humans to be beneath him and worthy of contempt. plus, complete unquestioning of everything that he has ever been told. Slowly but surely, he becomes increasingly aware of his and the Empire’s shortfalls. The fact that Khemri is such a complete douchebag is probably part of what I liked the most about the book because it was believable and fitting into the society where he grew up. The main arc – his transformation – is incredibly fun to read because of the world-building (although some parts of that were slightly boring and perhaps too detailed) and the scrapes he gets into. That said, I am not sure I completely bought this transformation but more on that later on.

Another thing that I loved about A Confusion of Princes is its lack of exposition and info-dump. From the start, the reader is dropped into this fascinating futuristic world, expected to fully understand it as we go along and I really appreciated the lack of hand-holding and pandering. I also loved the diversity of gender (princes can be either male or female – although I would have appreciated a gender neutral title; loads of female characters in positions of power), race and sexual orientation (most princes seem to be bisexual) representation. These are presented without making an issue out of it and it’s all the more appreciated considering this is a YA novel.

That said, although I loved the idea of Khemri’s arc being an exploration of what it means to be human at its core, I felt that this very exploration was short-changed by occurring far too fast. It doesn’t take much for Khemri to question his entire life, it doesn’t take long for him to change. I never quite bought his transformation because it was very sudden (and brought forth by an insta-love connection with a human girl). In truth, we were told rather than shown this transformation and as such I felt his change was perfunctory and superficial rather than really profound and affecting. Seriously, there is so much potential to this story but at lot of it was merely glanced over. There is enough material here for at least a trilogy.

Ultimately, although I felt A Confusion of Princes could have been soooooo much better, I still enjoyed reading it a lot and thoroughly recommend it.

At last! A non-divisive review from la casa de Smugglers! I wholeheartedly agree with everything that Ana has said.

A Confusion of Princes is a delightful book, and I truly enjoyed many aspects of the novel – not the least Prince Khemri (later just “Khem”)’s narrative. I love the idea of this intergalactic empire, its myriad biologically engineered Princes (of both genders!), and the hijinks that Khemri gets tangled into as he transitions from Prince to understanding the value of life and humanity. On the other hand, while fun, A Confusion of Princes sort of squanders much of its promise, especially in later chapters as Khem’s transition from self-absorbed Prince to in loooooove with a human girl feels predictable and forced.

But on to the good: the most appealing thing about A Confusion of Princes is the narration of Khemri and his blithely superior attitude. To be fair, Prince Khemri *is* an imperial Prince and thus has been selected for his genetic compatibility and has been trained since youth to be a superior creature – but it’s pretty funny to read, especially when all of Khemri’s biological and cybernetic type of advantages are stripped away. On that note, the actual universe, in which Princes are snatched from parents as children and whisked away to undergo modifications and training, and groomed to become candidates for Imperial Greatness, is fascinating. I love the idea of this cutthroat, competitive array of Princes fighting for superiority and status across the universe – oh, and did I mention that they also have the ability to be reborn? Should the all-seeing “Imperial Mind” find them worthy of revival, these Princes can die multiple times and be reborn into cloned adult human bodies. I also love that “Prince” is not a gender-specific term, and that females are Princes, too.

Praises said – there are also some downsides. First, the narrator and hero of our piece, Prince Khemri, is a fantastic voice, but I could not for the life of me stop comparing him to Miles Vorkosigan. And if you, like me, are a Vorkosigan fan, you know that NO ONE can compare to the charming, clever, hilarious Miles. The other, more significant problems were with the tendency to skip over the good stuff. That is, there’s the odd sense that things are truncated and skipped over completely. The things that I so desperately wanted to see unfold were glossed over with a few sentences (e.g. Khem’s first four simulations in his human – non Prince enhanced – body). And then of course there’s the InstaLove of Doom. I didn’t quite buy into the immediate attraction and relationship between Khem and Raine (and on a broader level, I don’t know how I feel about the tried trope of powerful dude falls in love with human girl who teaches him the value of life and love, blah blah blah. Not my favorite trope.). The most frustrating thing about A Confusion of Princes, however, is this feeling of opportunity squandered. This is a book with a ton of potential and some soaring high points, but it never really manages to deliver on that promise.

That said, despite these misgivings, I did truly enjoy A Confusion of Princes and certainly recommend it – but if you’ve read this and want something with a littler more oomph, I’d point you to Lois McMaster Bujold and the ineffable Miles Vorkosigan.

We’ve been discussing these covers since we started reading the book. We assume that the man on the cover depicts the main character who is described thusly in the book:

My own brown skin and black eyes

We’ve been pondering if these covers are whitewashed but the fact is…we can’t really tell can we? The UK one could be any kind of guy given the blue shadowy hue all over the cover and we can barely see the model in the US cover.

Odds are this is a caucasian model instead of being brown-skinned, but we don’t think we can cry whitewashing because we can’t really see the model. We do think we can say that this is a shame because this would have been a great opportunity to use a POC model…but instead we’ve got is this kind of ambivalent, maybe-he-is-maybe-he-isn’t cover.

I HAVE DIED THREE times, and three times been reborn, though I am not yet twenty in the old Earth years by which it is still the fashion to measure time.

This is the story of my three deaths, and my life between.

My name is Khemri, though this is not the name my parents gave me. I do not know who my parents are, and never will, for I was taken from them as a baby. This is one of the secrets the Empire keeps well. No Prince may ever know his or her parents, or the world of their birth. Even trying to find out is forbidden, which just about sums up the paradox of being a Prince. We have vast power and seemingly limitless authority, except when we try to exercise that power or authority beyond the bounds that have been set for us.

It’s still about a million times better than being an ordinary Imperial subject, mind you. It just isn’t everything that I thought it was going to be when I was a child, a Prince candidate being carefully raised in considerable ignorance in my remote temple. So I’m one of the ten million Princes who rule the Empire, the largest political entity in recorded history or current knowledge. The Empire extends across a vast swath of the galaxy, encompassing more than seventeen million systems, tens of millions of inhabited worlds, and trillions of sentient subjects, most of them humans of old Earth stock.

It is Imperial policy that all these mostly planet-bound yokel types know as little as possible about the apparently godlike beings who rule them. Even our enemies—the alien Sad-Eyes, the enigmatic Deaders, and the Naknuk rebels—know more of us than our own people.

The ordinary folk think we’re immortal. Which is natural enough when they typically have something like their grandfather’s grandfather’s grandmother’s nice commemorative stereosculpture of a good-looking young Prince on the family mantelpiece and then they see the same Prince handing out Grower of the Month awards at the annual harvest festival or whatever.

It would be the same Prince too, because while we’re not actually immortal, if we get killed we do mostly get reborn into an identical adult body. It’s a technical difference, I guess.