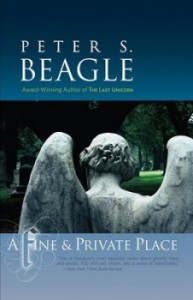 Title: A Fine and Private Place

For nineteen years, Jonathan Rebeck has hidden from the world within the confines of the Bronx’s Yorkchester Cemetery, making an abandoned mausoleum his secret home. He speaks with the newly dead as they pass from life to wherever spirits truly go, providing them with comfort, an understanding ear, and even the occasional game of chess.

But Mr. Rebeck’s reclusive life is soon to be disrupted. An impossible love has blossomed between two ghosts, and Rebeck himself is drawn to a living woman. Helped along by a cynical talking raven and a mysterious cemetery guard, these four souls must learn the true difference between life and death, and make choices that really are forever.

Why did I read this book: I recently read and loved Sleight of Hand and wanted to read more from this author

A few weeks ago, I read and reviewed Sleight of Hand, my first real introduction to Peter S. Beagle’s writing and I loved it so much I proceeded to add some of his other books to my TBR pile: The Last Unicorn because everybody seems to love it and A Fine and Private Place which came highly recommended by The Other Ana. I decided to start in chronological order: A Fine and Private Place was Mr Beagle’s first book, published back in 1960 and written when he was merely 19 years old.

Well, you can colour me dumbfounded: this was his first book? Written when he was NINETEEN? It is almost unbelievable but there you have it: talent. Mr Beagle has it in spades.

Jonathan Rebeck has been living in an abandoned mausoleum within Bronx’s Yorkchester Cemetery and for the past 19 years hasn’t crossed its gates. There, he has everything he needs. He bathes in the public restrooms, drinks from the public water fountain, gets his food delivered by a talking, friendly raven (because ravens bring things to people – that’s what they do) and generally spends his days in quiet, solitary contemplation. Sometimes though, he gets the fleeting company of the recently dead before they move on to wherever they must go. As they all do eventually because the dead forget about living and eventually fade away.

Michael Morgan is newly dead, certain he was killed by his wife and determined to stay put and not let go of life but just like any other ghost, soon enough he starts forgetting. On the other side of the spectrum, the idea of fading away suits Laura Durand, another recent arrival, well enough. Ironically, she can’t really rest and finds herself feeling more alive than ever. The two strike up a friendship just as Mr Rebeck starts to enjoy the company of a living person for the first time in 19 years by befriending Gertrude Klapperm, widow of another of the cemetery’s residents.

A Fine and Private Place is a wonderful novel of magic realism and it revolves around the aforementioned four people (and the one raven). Very, very little happens in terms of plot which is really, a funny thing to say, because the main theme of the novel (death vs. life) is so momentous and there is a such a gravitas around its characters and the conversations they have with each other that it almost makes me uncomfortable to be so crass as to say that there is hardly any action within these covers.

But there isn’t. Not in the strict sense of the word although there is some movement towards say, the future, in the ending. This is a very introspective story and the characters spend their time talking or thinking about life and death. Not that it is a heavy, depressing piece of writing. Quite the contrary, there is beauty and melancholy and delicate consideration about people’s lives and even laugh-out-loud funny moments, courtesy of the raven. The story is mostly confined to the cemetery (this fine and private place) though, as three of its main characters are unable to leave it: the ghosts because they physically can’t and Mr Rebeck because he won’t allow himself to.

The significance of the latter is obvious: who is really living, who is really dead? The ghosts fight to live, to grasp one last moment before they forget everything. Rebeck is worst than a ghost, with his self-imposed imprisonment, even though he lives in perpetual self-denial believing that he is free from societal norms and is actually providing a service to the dead with his companionship.

Beyond that, there is the examination of the afterlife and what it entails: in this world, there is no hell or heaven. There is only memory and forgetfulness and the ghosts inhabit that place in-between. It doesn’t mean that things are black or white. Quite the contrary, if there is anything to be said about this novel is how even as the characters philosophise to their heart’s desires, the answers are fuzzy or non-existent. Take memory itself. Its power is so tremendous that it can ground ghosts and make them more alive. It can do the same to the living and imprison them to the past. At one point in the novel it is said that despite popular belief, it is “the living that haunt the dead”.

Or how about love? Does love last forever? Must it? When two of the characters fall in love, is it really love what they feel? Or is it a last attempt to remain alive? Does it matter? I guess it is up to the reader to answer that one.

A Fine and Private Place is a beautifully written novel, the sort of book that needs to be enjoyed and savoured slowly. I loved it: it is truly incredible, lovely and really romantic too.

“The raven made a dive at a hurrying caterpillar and missed. He spoke slowly, without looking at Mr. Rebeck. “There are people,” he said, “who give, and there are people who take. There are people who create, people who destroy, and people who don’t do anything and drive the other two kinds crazy. It’s born in you, whether you give or take, and that’s the way you are. Ravens brings things to people. We’re like that. It’s our nature. We don’t like it. We’d much rather be eagles, or swans, or even one of those moronic robins, but we’re ravens and there you are. Ravens don’t feel right without somebody to bring things do, and when we do find somebody we realize what a silly business it was in the first place.” He made a sound between a chuckle and a cough. “Ravens are pretty neurotic birds. We’re closer to people than any other bird, and we’re bound to them all of lives, but we don’t have to like them. You think we brought Elijah food because we liked him? He was an old man with a dirty beard.”

The Dare: Orphans of Chaos

Book Review: Blood of the Demon by Diana Rowland