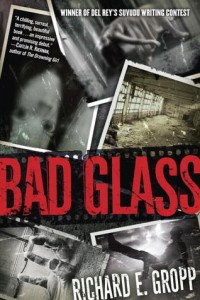 One of the most hauntingly original dark fantasy debuts in years—perfect for fans of Lost and Mark Danielewski’s cult classic, House of Leaves.

Something has happened in Spokane. The military has evacuated the city and locked it down. Even so, disturbing rumors and images seep out, finding their way onto the Internet, spreading curiosity, skepticism, and panic. For what they show is—or should be—impossible: strange creatures that cannot exist, sudden disappearances that violate the laws of physics, human bodies fused with inanimate objects, trapped yet still half alive. . . .

Dean Walker, an aspiring photographer, sneaks into the quarantined city in search of fame. What he finds will change him in unimaginable ways. Hooking up with a group of outcasts led by a beautiful young woman named Taylor, Dean embarks on a journey into the heart of a mystery whose philosophical implications are as terrifying as its physical manifestations. Even as he falls in love with Taylor—a woman as damaged and seductive as the city itself—his already tenuous hold on reality starts to come loose. Or perhaps it is Spokane’s grip on the world that is coming undone.

Now, caught up in a web of interlacing secrets and betrayals, Dean, Taylor, and their friends must make their way through this ever-shifting maze of a city, a city that is actively hunting them down, herding them toward a shocking destiny.

How did I get this book: eARC from the Publisher (via NetGalley)

Why did I read this book: The jacket copy cites two things that I love: House of Leaves and Lost. How on earth could I resist that? Then, I learned that this book was the winner of Del Rey’s Suvudu writing contest, which of course piqued my interest even further.

Something’s rotten in the state of Washington. More specifically, the city of Spokane has gone bad – disappearances and violent, bizarre acts in the city garner attention in the public eye, and the military has stepped in, walling off Spokane from the rest of the world under constant guard. Even with the military quarantine, news still trickles out from Spokane – rumors of unimaginable, supernatural horror are backed up by nightmarish images that cannot possibly be real. Fifth year college senior Dean Walker seizes upon this as his one golden opportunity to make his name as a photographer and escape the dreary life at his father’s accounting firm following graduation. Cashing in his father’s tuition check, armed with his camera, laptop, and a shit ton of batteries, Dean sneaks his way into Spokane. Here, he meets a ragtag group of other twenty-somethings who have refused to leave the city for their own reasons, and with their help, he learns that the rumors about Spokane are completely, horrifically true. Impossible things are happening in the rundown city, with the dead appearing and reality merging with dark fantasy – and as Dean struggles to capture everything on camera to make his mark, he’s led down a rabbit hole that threatens his sanity and his life.

Bad Glass has one hell of a premise – I love the isolated, haunted city trope, cut off from the rest of the world because of some unspeakable evil or danger within. From Silent Hill to Cherie Priest’s Boneshaker, the ‘something is wrong with this town’ premise is a solid standby, and the choice of Spokane as setting is an interesting (unpredicted) one. The title is clever, too – with “bad glass” as the opposite of “good glass” (a photography term to describe high quality camera lenses). And, for the first chapters of the novel, Bad Glass delivers on this creepy premise, literally drawing a picture of the wrongness of Spokane (each chapter is prefaced with the description of a photograph or some other visual/audio media), and introducing us to our wastrel protagonist, Dean. These first pages, detailing his trip into Spokane and his teaming up with the city’s other young denizens, are undeniably solid.

From there, however, Bad Glass loses steam. Featuring a cast of lackluster characters, a stumbling, confused plot, and relying all too much on a tendency to describe horrific imagery instead of letting true terror build and unfold, Bad Glass squanders its promising beginning.

Let’s start with the plot, because Bad Glass‘s most egregious offense is that the story doesn’t actually go anywhere. It’s a killer premise, but once Dean teams up with a group of other cohorts in Spokane, no one seems very interested in answers as to WHY Spokane is so strange, nor do they seem interested in pursuing their half-hearted motivations they claim are keeping them in the haunted city (they are, however, very apt at smoking weed and drinking a ton of bourbon to wash down their prescription grade painkillers before the odd sexual escapade). Basically, the story is: strange things happen and people trip out. Some pictures are taken. Talking happens. Lather, rinse, repeat. In a sense, this book does feel like Lost in the sense that it poses some tantalizing questions while refusing to deliver answers; it feels like the first in a protracted television series (and one not nearly as compelling as Lost).

Compounding the lack of plot and direction problem is the issue of Bad Glass‘s reliance on description, rather than atmosphere or tension – instead of building terror, this novel focuses on detailed descriptions of unsettling images. In fact, each chapter in the book is preceeded by the description of a photograph (or video) from Spokane, calling that old adage to mind: a picture is worth a thousand words. While Gropp has a fantastic flair for description, and I appreciate his clear knowledge of photography and other visual media, I can’t help but wish that Bad Glass had taken a note from Ransom Riggs’ infinitely more effective, photo-illustrated Miss Peregrine’s Home for Peculiar Children.

I am perhaps coming across as unfairly harsh, because there is some entertainment value and merit to Bad Glass. The premise is superb, and while lengthy descriptions of tableaus of horror aren’t particularly to my taste, they may be for others. I also like that Gropp does create some unlikeable, flawed characters as his core cast – Dean isn’t very endearing right off the bat, as he takes his daddy’s money (who apparently is rich enough to pay for his son’s tuition for five years of college) to run into Spokane with a half-cocked plan to fame and fortune. His love interest, Taylor, is a beautiful girl with serious baggage and her own twisted reasons for staying in Spokane after her parents’ disappearance. The rest of the motley crew are at least refreshingly diverse, and each is working through their own issues – which are discussed, ad nauseam.

For me, Bad Glass is decent, but nothing to write home about. As they say, though, your mileage may vary.

Notable Quotes/Parts: You can read the first 50 pages of Bad Glass HERE, or by using the widget below:

Rating: 5 – Meh to OK, nothing to write home about

Book Review: The Dark Between by Sonia Gensler