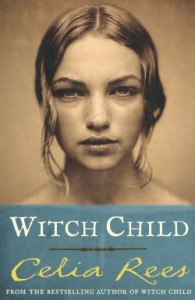 Welcome to the world of young Mary Newbury, a world where simply being different can cost a person her life. Hidden until now in the pages of her diary, Mary’s startling story begins in 1659, the year her beloved grandmother is hanged in the public square as a witch. Mary narrowly escapes a similar fate, only to face intolerance and new danger among the Puritans in the New World. How long can she hide her true identity? Will she ever find a place where her healing powers will not be feared?

Stand alone or series: Stand alone but there is a sequel called Sorceress

Why did I read this book: I love books about witch hunting especially when in historical context like this one. Plus, I always wanted to read a Celia Rees novel and when I came across this at a church sale, I bought it.

In modern times, a colonial quilt is found. Woven into its threads are hidden pages of a 17th century diary belonging to a young girl named Mary. Witch Child is her story, in her own words written in her diary. [1. On that note: for these written pages to have survived unscathed all this time means that this quilt was NEVER washed…gross.]

It starts with an admission and an account of a terrible event: Mary is a witch. Or rather: the grandchild of a witch who had just been horrendously tortured and hanged in front of Mary’s eyes. Rescued from the same fate by an anonymous benefactor, Mary is given free passage on a ship to Salem in the New World where she hopes to start anew. On the way there, she befriends a middle-aged woman named Martha as well as an apothecary and his son. Together, they form a household and as time pass, their hope to start a new, free life is thwarted by prejudice and the growing suspicion from their Puritan neighbours.

There are many interesting aspects about Witch Child. Its opening pages when Mary was still in England were absolutely entrancing as Mary described the horror suffered by her grandmother, with her torture in the hands of the Witchfinders described in minutia. It was also interesting to read about Mary’s voyage to the New World and the – again, described in minutia – details of the ship, the appalling cramped living conditions as well as the psychological outlook of the passengers (a mixture of hope and of anxiety about this new life in the New World) and the eventual struggle for survival once they arrive. In that sense, Witch Child seems to have been really well–researched but at times I couldn’t help to think: enough with the exposition- this is a novel, not a history lesson.

Moving on: what prompted me to pick this up was the connection with witch hunting as I am fascinated by the object. I am fascinated by the psychology behind it, the social, economical, psychological elements that combine to allow a group of people to act on their fears, jealousy, rivalry, extreme beliefs, sexism and bigotry. I thought that Witch Child was able to capture this well – but only to a certain extent. Mary is an outsider to this new society in many ways: she is an orphan and not an official part of any immigrant family; she is a young woman with ideas of her own, with a desire to learn and extreme tolerance for not only different ideas and faiths but also for other peoples. She is immediately open to being friends with a couple of Native Americans as opposed to almost everybody else in her town who fear and discriminate against the “savages”.

I kept wondering if Mary’s balanced and tolerant perspective wasn’t anachronistic but ultimately thought that given her own story, it is very possible and believable that this character would be so tolerant. Knowing the unfairness of her grandmother’s death and being a learned person (she knows how to read, she studies with her apothecary friend) possibly makes up for a different frame of mind than the majority of those around her. I appreciated the fact she remained religious to the end – although not following the same puritanical bend as the rest of the town.

That said, once certain events start taking place toward the end of the book, Witch Child reminded me a lot of the historical Salem Witch Hunt. Given that this book was set in Salem but about 30 years before the actual historical event, I wondered WHY was this difference in timeline put in place when the events were so similar. This could easily be a “retelling of the Salem Witch Trial”.

The historical aspect was in my opinion, undermined by a paranormal element present in the novel. It is hinted that Mary is in fact an actual witch, with healing powers and an ability to see into the future. The two powers occur so randomly and with no actual consequence to the story that it befuddled me – why was it even there?

Finally, as much as I enjoyed the portrayal of Mary, stereotypical characterisation happened across the board. Puritans were mostly characterised as strict, obsessed and intolerant to the point of villainy. There are two Native Americans that appear in the novel: one of them is a Wise Healer (of course) and the other one, the romantic interest who was brought up by White people and who (of course) speaks English perfectly. Although the portrayal of the Native American characters is undoubtedly a positive one, it is still fairly stereotypical and equally as harmful as a negative portrayal.

I read Witch Child in one sitting. There were definitely good things about it, especially when it came to its main character and I certainly enjoyed it to a point. But there is a sequel to this novel which I do not intend to read – that says a lot.

I am a witch. Or so some would call me. “Spawn of the Devil,” “Witch child,” they hiss in the street, although I know neither father nor mother. I know only my grandmother, Eliza Nuttall; Mother Nuttall to her neighbors. She brought me up from a baby. If she knew who my parents are, she never told me.

“Daughter of the Erl King and the Elfen Queen, that’s who you are.”

We live in a small cottage on the very edge of the forest; Grandmother, me, and her cat and my rabbit. Lived. Live there no more.

Men came and dragged her away. Men in black coats and hats as tall as steeples. They skewered the cat on a pike; they smashed the rabbit’s skull by hitting him against the wall. They said that these were not God’s creatures but familiars, the Devil himself in disguise. They threw the mess of fur and flesh on to the midden and threatened to do the same to me, to her, if she did not confess her sins to them.

They took her away then.

She was locked in the keep for more than a week. First they “walked” her, marching her up and down, up and down between them for a day and a night until she could no longer hobble, her feet all bloody and swollen. She would not confess. So they set about to prove she was a witch. They called in a woman, a Witch Pricker, who stabbed my grandmother all over with long pins, probing for the spot that was numb, where no blood ran, the place where the familiars fed. The men watched as the woman did this, and my grandmother was forced to stand before their gloating eyes, a naked old lady, deprived of modesty and dignity, the blood streaming down her withered body, and still she would not confess.

They decided to “float” her. They had plenty of evidence against her, you see. Plenty. All week folk had been coming to them with accusations. How she had overlooked them, bringing sickness to their livestock and families; how she had used magic, sticking pins in wax figures to bring on affliction; how she had transformed herself and roamed the country for miles around as a great hare and how she did this by the use of ointment made from melted corpse fat. They questioned me, demanding, “Is this so?” She slept in the bed next to me every night, but how do I know where she went when sleep took her?

It was all lies. Nonsense and lies.

Reading Next: A Drowned Maiden’s Hair: A Melodrama by Laura Amy Schlitz