Smugglivus 2010 – I Love This Series: The Moorehawke Trilogy by Celine Kiernan + Giveaway

A few months ago, Thea and I wrote a joint review The Poison Throne, the first book in the Moorehawke Trilogy by Celine Kiernan and posted the review over at Tor.com. I loved it (Thea not so much – which is fine, because this series has ANA written all over it) and vowed to read the other two books ASAP. I didn’t and that was only because I knew that I needed at least a good 10 free hours in order to do so: I had the feeling that once I started reading book 2, I wouldn’t stop until finishing book 3 as well. I was right: a couple of weeks ago I had a free weekend and found myself staying up until Sunday 4am to finish it all AND OH MY GOD, IT WAS SO WORTH IT.

Suffice it to say: in a perfect world, I would love all the books that I read as much I loved the Moorehawke trilogy. Furthermore, you know by now that I love Fantasy novels, LOVE them. But it is very, very rarely that they are character-driven and that is exactly the greatest strength of this series. I can always enjoy gritty, dark fantasy on an intellectual level but very rarely on an emotional one. 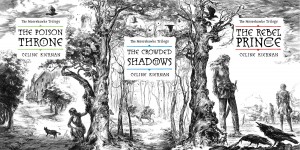 The Moorehawke Trilogy is set in alternate Europe in what feels like the beginning of the Modern Era (circa 15th-16th century). Basically, in terms of plot and with as little in the way of spoilers as possible: 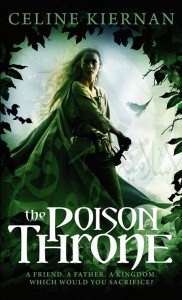 The protagonist-narrator, Wynter Moorehawke and her dying father, return home in The Poison Throne after a 5 year absence, eager to see her two childhood friends/brothers Razi and Alberon only to find the Kingdom in the throes of political and religious turmoil. The once kind and enlightened King Jonathon has become a tyrant who opened the doors to the Inquisition, subverting the previous order. Now, the Cats who used to communicate with people have been killed and the Ghosts of the Castle have been declared non-existent. Even more distressing is the political instability as Alberon, the official heir to the throne is nowhere to be seen and his half-brother (and bastard son), Razi has been proclaimed the new heir. The story follows Wynter and her father as well as Razi and his best friend Christopher as they are caught up in the middle of transition. After events in the end of book one, in The Crowded Shadows, the three amigos – Razi, Wynter and Christopher – set out (apart at first, together eventually) to find Alberon to try and make sense of what in the world is going on and why is he rebelling against his own father and what exactly is this Weapon that everybody seems to fear so much. And then finally in book 3, The Rebel Prince, they meet with Alberon and all of the plotlines come together and we learn the Truth, the whole Truth and nothing but the Truth. 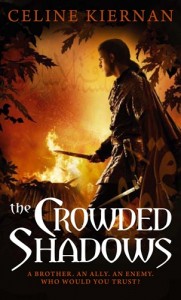 Even more basically: book 1, is set at Court, is full of social intrigue and is effectively the Mystery book. Book two is a on-the road-book but also the Relationship book. Book three is set mostly at Alberon’s camp and is the Politics book.

But more to the point: none of what I said so far reveals what really is the heart and soul of this series: its characters, their diversity (Razi is Arab for example and there are secondary gay characters in an awesome loving relationship as well), their struggles, the relationships. They are all well-drawn, from the three main characters, to the villains, to the secondary characters.

Wynter, Razi and Christopher are all in a way reluctant heroes. Wynter would much rather be working than being at Court; Razi is a doctor and does not want to take his brother’s place much less be in charge of a whole Kingdom; Christopher has his own agenda but will put it aside due to his undying loyalty to Razi. 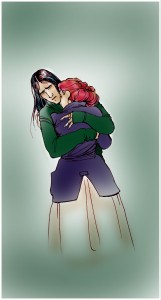 Chris and Wyn, by the author

They are all terrified by what is going on but they take upon themselves to do something: for their Kingdom, for their friends, for each other, for Alberon, who is absent and who needs to be heard. Razi and Christopher have been through a lot of stuff together before the story even starts; Razi and Wynter are like brother and sister and their relationship is awesome and heart-warming and then there is the equally awesome and heart-warming romance between Wynter and Christopher that develops over the course of the three books (the scene where he asks her name and we learn that Wynter is not her real name – and why she is called Wynter in the first place is all kinds of amazing).

More than the main trio and their relationship with each other though, there are other characters that shone through: Wyn’s father, Lorcan; Razi and Alberon’s; Alberon, who was a huge surprise in the way that he was not what I expected at all and it took some time to warm up to him; and dear lord, the plethora of characters in the Merron’s camp (where a great part of book 2 is set). The Merron are a nation (to which Christopher almost reluctantly belongs to) of nomads who have their own religious beliefs (you can read more about them in the author’s website) and I thought this part of the story was absolutely fascinating: it revealed more about Christopher, it revealed more about the world-building; this is where Razi falls in love too: 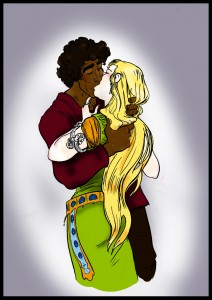 Razy and Embla, by the author.

And it is all so heartbreaking and even more than that: there are huge plot twists in this part of the story and they are HORRENDOUS and it is even more awesome because even though these horrible things are perpetrated by the Merron people, still, the author makes it possible for the reader to understand WHY. This is no mean feat, because of what exactly I am talking about (clue: human sacrifice) .

Just to make things clear: when I say that the characters are what made this series for me, this does not mean that the series is plot-less – this is far from the truth. It is just that the religious, political, economical issues are all felt and lived by the characters and they are the ones to move the plot forward not the other way around in a well-balanced story. It is interesting to note that out of the three books, The Crowded Shadows is by far my favourite: it is possibly where one can argue, “nothing” really happens, to wit I would counter argue that in fact, it is the book where the MOST AWESOME things happen, but they are all of the emotional variety.

In the end, it was hard for me to side with one side or the other – which to me just shows how really COMPLEX the running of a freaking kingdom is and how there are no easy answers. And I appreciated how the author never once let me down in this regard.

And not even the appearance of a last-minute deus ex machina that nearly BROKE MY HEART, was enough to bring down this series. I fully understood the necessity of said deus ex machina, even if the HOW it happens was not to my own liking. My reaction though, is admittedly a part of my personal emotional investment in this series. It is interesting, how that same sequence of events though, holds what is the ultimate, finest moment of each character. 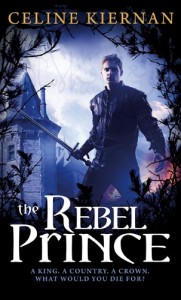 And I shall leave you with my MOST FAVOURITE scene, in which Wynter (have I told you how awesome she is?) tells Christopher:

You listen to me, Freeman Garron. I am telling you now, I love you.

‘I love you’, she insisted, her face very close to his.’To court I shall always be the Protector Lady Wynter Moorehawke. To Razi and Alberon I shall always be Wyn – Razi’s baby, Albi’s little sis. These things are what I am, Christopher, and I am proud of them. But I am also your Iseult. You are the only man to whom I shall ever be thus, and I shall never let that go. We shall find our place,’ she promised. ‘I’m not yet certain how we shall find it, or where it will be, but wherever it is, we shall be together, Christopher; and whatever we are doing, it will not involve me sitting in a tent waiting for my menfolk to change the world.’

It is stuff to warm up your soul, y’all.

Because I love this series so much and want people to read it, I am giving away the entire trilogy to one lucky winner. The contest is open to EVERYBODY, and will run until Saturday December 18 at 11:59 PM (PST). In order to enter, simply leave a comment here. ONE comment per person, please! Multiple comments will be automatically disqualified. Good luck!