Today, we have guest author Alexander Gordon Smith over to talk about his newest book, The Fury – a gore and viscera zombie-style thrill ride of a YA novel. 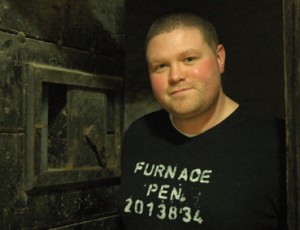 Please give it up for Gordon!

It’s great to be back on The Book Smugglers, thanks so much for having me! 🙂 I was debating which influences and inspirations to talk about today when it occurred to me that the answer was being pumped out of my stereo speakers at six billion decibels. I’m currently listening to a track from Two Steps From Hell’s album, Archangel. It is essentially movie trailer music (these guys write music for the big blockbuster trailers), you know, all drama and fire and action designed to get the pulse pounding. It’s incredible how much influence music – all music – has on your mood, your thoughts, your dreams, your decisions. It completely changes your frame of mind (well, mine anyway, but then I am quite impressionable). And it’s amazing for your writing too.

I often listen to action movie scores on my iPod when I’m out and about. There’s something about having The Dark Knight blasting into your brain that makes you feel invincible. I walk at least twice as fast when I’ve got something like this on, and often have to stop myself breaking into a run and jumping over a moving car (this is where listening to music can be dangerous, as physically I am in no condition to run or jump over anything, I’d just bounce off and get splattered over the road). I listen to scores when I’m driving, too, which is equally dangerous because I feel like I’m in a chase scene and have to repress an almost irresistible urge to barge police cars off the road then floor it off the side of a bridge onto a passing boat. Music is amazing like that, it completely alters your view of yourself and the world. Listen to the right track and you feel as if you can wrestle a bear, or scale a mountain using just your teeth, anything. It’s like having a soundtrack to your own life, a soundtrack that turns even the most ordinary activity into a Herculean victory worthy of the big screen. But more than that, it opens your eyes to things you might not have thought about, it widens your horizons, it makes you believe that anything is possible.

Music is like fuel thrown onto the fire of the imagination. If I’m ever looking for a new idea I’ll play something by Hans Zimmer or Steve Jablonsky or John Powell or Jerry Goldsmith, and the ideas will suddenly flow, dozens of them. Often they’ll be subtle flickers of things – chases, fights, deaths, victories, monsters, etc – shimmering moments I can’t always make sense of. But each flicker, nurtured by the music, is the beginning of something bigger, if I focus on it then it will grow, I’ll see more of this story. Then the track changes, the pace and tone of the music heightens or softens, and you maybe see something else. After a while all of these independent flickering embers become something more, you start to put the pieces together. They flare up into an inferno and suddenly there’s a story there, burning a hole in your head just raging to get out.

The Fury was created like this. I’d had the idea for a while, but just the initial premise and not much more. It was something I wanted to work on but I wasn’t sure where it was going to go, so it was just bubbling away on the back burner for a while. Then one day I was doing some DIY – painting a spare room – and listening to the soundtrack for I Am Legend at full blast (I love the book, and the soundtrack, if not so much the film). And suddenly I saw a scene from my unwritten novel – one of the last scenes, when they’re running back to Fursville (you’ll have to read it to find out what I’m talking about!). The scene suddenly ignited, every single detail of it, the fire and the smoke, the screams and the howls, the thunder of feet and the pulse of a helicopter, the stench of blood and the throbbing, world-shaking hum of what waits for them inside the old theme park. It was so vivid that it nearly knocked me off my stepladder, made me scramble through into the office so I could start writing, leaving my fingerprints in paint all over the keyboard. That scene probably would have come to me eventually, I mean it was already inside my brain somewhere, but it’s the music that coaxed it out. With the soundtrack there I could see that scene played out start to finish. More than that, I was there, right alongside the characters. It transported me into the heart of the story.

During the writing process itself, music acts as a catalyst. It pulls the story along, shaping each scene in a way that might never have occurred to me if I had been writing in silence. It immerses you in the action, it makes you feel as if this is your story, your life in danger, your world threatened, as if you are genuinely fighting tooth and nail to survive. And by placing you inside the action this way it forces you to think about the story differently – you’re no longer just writing to get from A to B, you’re writing to save your own skin. The decisions you make for your characters become, I think, more realistic. Flawed maybe, because they are made in the heat of the moment, but more believable because of it. I love working this way because you’re not just writing the story, you’re living it.

My favourite five composers to listen to when writing (although I’m always finding new favourites) are: Hans Zimmer (The Dark Knight, Inception, Gladiator, The Thin Red Line, the list is endless), Jerry Goldsmith (if you’re writing horror then try listening to The Omen score, it’s amazingly terrifying), John Powell (the Bourne soundtracks are pure adrenaline, perfect for action scenes), Akira Yamaoka (he does the soundtrack for the Silent Hill video games, probably the most disturbing music I have ever heard, and perfect for writing horror to) and Clint Mansell (for something softer and more emotional, think The Fountain and Moon). But there are so many amazing soundtracks out there, just keep an ear out when you’re watching a film!